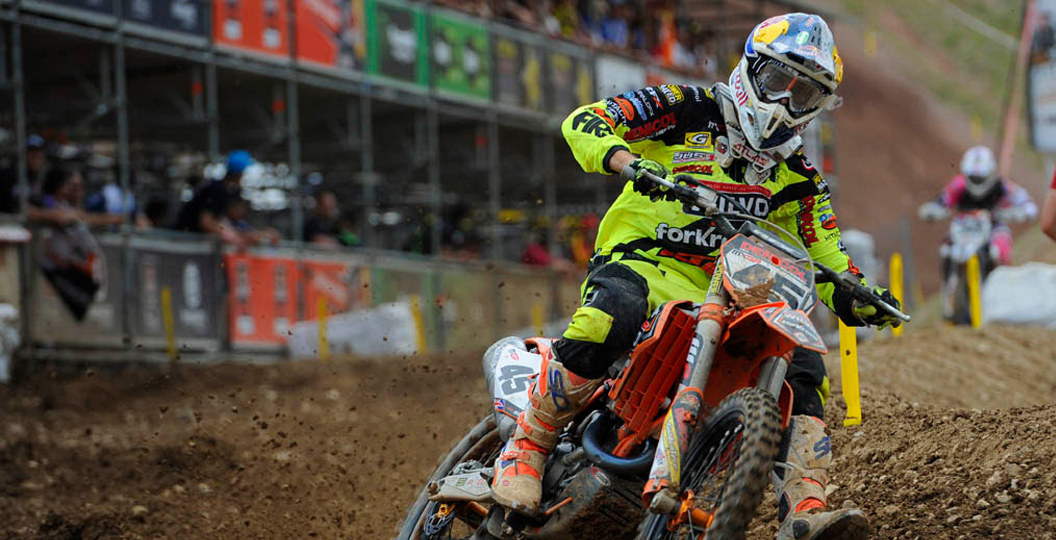 Maggiora, 14-15 June. Round 10 of the World Championship was held at the iconic Maggiora circuit in northern Italy where the team had their full compliment of riders in action with Adam Sterry (EMX 250) and Kenny Van Dueren (EMX 300) joining their MXGP teammates for a hectic weekend of racing.

Qualifying:
Back from injury, Van Dueren posted 6th fastest in the EMX300 class, Sterry was 3rd fastest in EMX 250 and Nicholls and Karro were 11th and 15th respectively in their MXGP qualifying race, however Nicholls had damaged a finger and his participation in the main races was now in doubt.

EMX 300
Race 1
The day’s pain started early as a wasp went down Van Dueren’s shirt on the opening lap and started stinging him. As he frantically slapped himself in an attempt to kill it he fell off and ended up coming into the pits to get rid of it. With a dozen painful stings in his torso he finally joined the action at the back of the field. He rode hard and fast to finally finish in 7th.

Race 2.
After overnight rain the track conditions were very different to the previous day and Van Dueren wasn’t as comfortable and after gating in 6th he could only progress one more place to finish in 5th for 6th overall.

EMX 250
Race 1
Sterry made a good start and soon pushed into the top three. He chased after Watson for second for most of the race but after getting held up by a back marker he fell into the clutches of Olsen and Dercourt and started to make a few mistakes as he tried to fend them off. He eventually made one mistake too many and they both moved through, leaving him to cross the line in 5th.

Race 2
Sterry got clipped on the start and was buried in the pack and then hit neutral as he battled around the third turn. Now down in 25th he had a tough race ahead of him but he soon found his rhythm and started picking off the riders in front. He made some great passes to take a well earned 8th for 6th overall.

MXGP
Race 1
Karro didn’t make a great start but managed to squeeze his way through to 9th. Nicholls was in 17th but it was evident that he was struggling. On the second lap Karro crashed, relegating him to 20th and Nicholls pulled out, having to concede defeat as he was unable to hold on with his damaged hand. Karro fought back hard but could only progress to 15th at the finish.

Race2
Karro made a great start and was in 4th as they completed the first lap. After losing a place to Frossard he came under attack from Strijbos who he held off for two laps before doing the same to Dessalle. Whilst battling for 7th with Simpson he crashed hard on the jump at the top of the circuit and after eventually picking himself up he cruised into the pits, battered and bruised and in particular nursing his left hand.

Kenny Van Dueren said: “Didn’t have the best weekend, first race on Saturday I was 4th in start but in the first lap i felt there was a wasp that got stuck between me and my protector and it stung me 12 times, never happened in my life before but it hurt a lot. I even crashed because I couldn’t concentrate so I pulled in the pits took my shirt off. I started again, but in last and riding was going good so finished 7th. The result wasn’t there but my riding was ok. In the second race on Sunday, the track was different because of the rain during the night, I missed some rhythm in the ruts and finished 5th; really disappointed right now so hope to be better in Sweden.”

Adam Sterry said: “Qualifying went well, I liked the track and posted 3rd fastest time which gave me a really good gate pick. First race I wheelied out of the start but still managed 4th and soon moved into 3rd. I was in 3rd most of the race until a lapper didn’t move which cost me my rhythm and I tightened up to finish 5th. Race 2, someone came across on the start which put me mid pack and in the 3rd corner another bike knocked my bike into neutral, being on a hill I struggled to get going. From near last I got back to 8th which was good. Overall I was disappointed,  not with my riding but with the results. I have lost more ground in the championship so I will work harder to gain the points back in Sweden.”

Matiss Karro said: “Saturday was ok, getting feeling with track and suspension but in qualifying race finished 15th which wasn’t that good. Sunday first race, I had a decent start but second lap crashed again and from the back came through to 15th, and at the end of the race got little arm-pump. Second race: awesome start and was riding good. Few riders got past me but still felt good until a nasty crash.I twisted my wrist and couldn’t continue the race.”

Jake Nicholls said: “I’m pretty frustrated at the minute, I love this track and to not be able to ride because of something that sounds so trivial as a damaged finger is so hard to take. But it’s on my clutch hand and it’s almost impossible to hold on and at this level it’s too dangerous to try and ride if you’re struggling to hold onto the bike. I have an appointment with a specialist tomorrow morning so we will have to see what he says.”

Steve Turner concluded: “They say you have to take the rough with the smooth but I think that this weekend was more like taking the rough with the rough. At least we had a balcony at our hotel with a lovely view of lake Maggiora. Seriously though, It feels right now that it can’t get much worse, with both guys out with damaged hands but in reality when you see what happened to Roelants and Bobryshev this weekend; it puts it into perspective. I’d just like to pass on the team’s best wishes to Bobby and in particular to Joel.”