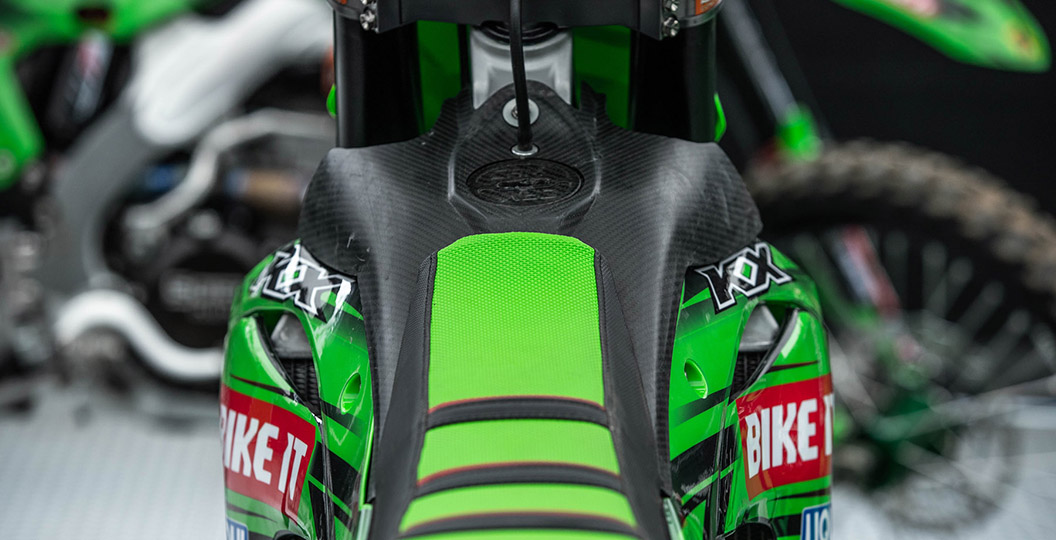 Lommel is often an important round on the 2019 FIM Motocross World Championship calendar, as many brands launch their ranges for the forthcoming year and teams and riders intensify their contract talks for next season. There is always plenty going on, and that is without talking about some of the finer details of new bikes parts. Here is some stuff from a stroll around the paddock at Lommel.

Eye Track, an electronic marshal/surveillance device that monitors the track for fallen riders on blind spots can be spotted around the track at Lommel. The technology is not going to be in use this weekend, it is pretty cool to see new technology helping to improve rider safety in motocross.

Standing Construct KTM’s Max Anstie was one of a few riders to introduce a vented plate for Lommel.

Meanwhile Dixon Racing Team Kawasaki rider Darian Sanayei has chosen a different method of increasing airflow to the radiators with this custom CRM Karbotank product, which integrates bigger air intakes on top of the shrouds.

We also spotted DRT using Suter clutches, a change that occurred following testing after Mantova back in April, when a number of teams began testing them.  Soon after they also appeared on the Monster Energy Wilvo Yamaha MXGP team amongst others in the paddock.

Speaking of Suter, we spotted a Suter clutch on Henry Jacobi’s F&H Kawasaki whilst Adam Sterry and Roan van de Moosdijk continue to run with Rekluse.

Jacky Marten’s side of the Rockstar Energy Husqvarna Factory Racing team wins the hospitality stakes here in Lommel, introducing McDonald’s to the paddock for their VIP guests. JM Racing have actually entered a sponsorship agreement with McDonald’s for this event.

HRC are running a new carbon tank on Tim Gajser and Brian Bogers’ CRF450F. The tank has a lower profile than the aluminium tank previously used.

We are pretty sure this wasn’t a Belgian newspaper being used on Jeremy Seewer’s bike stand! Sudoku anyone?

Honda 114 Motorsports will have Koen Gouwenberg filling in in this weekend due to the injuries sustained by Mitch Evans and Zach Pichon.

Gebben Van Venrooy Kawasaki are using Solva Suspension on their KX450.  The Italian suspension manufacturer has reduced its presence in the paddock since claiming three world titles with Antonio Cairoli back in 2005, 2007 and 2009 aboard the DeCarli Yamaha.

Leatt held a media event at the track late on Friday where founder and head of R&D Dr. Chris Leatt was introduced to talk us through the history of the company and the level of research that has gone into his product.  Here he is joined by Leatt ambassadors from MXGP, MX2 and EMX.