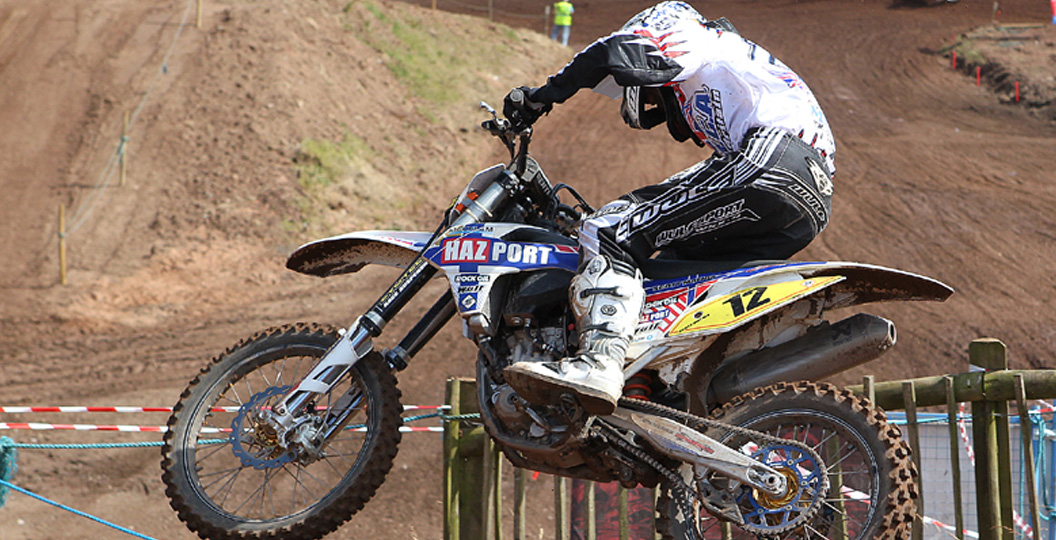 Five out of five podiums,eleven out of fifteen moto wins and never finishing outside the top three placings explains just why the super Adam Harris is marching relentlessly onto his third consecutive AMCA 2T title.Indeed if the Kawasaki pilot can maintain that fantastic form during this weekend’s penultimate round at Ollerton,Shropshire in a meeting hosted by the Market Drayton MXC,he will surely have one big hand on that crown yet again!!.Currently holding 2nd place in the AMCA 2T title chase is the fast starting Jamie Dobson,96 points in arrears but still right in there and fighting very hard!!.In 2014 there is also a separate 2T class for 125cc mounted riders with Will Hughes not only topping that charge but also brilliantly sitting in 3rd spot in the overall AMCA 2T contest!!.Hughes recently overhauled Kieran Mulloy to move up the standings as the Hereford rider crashed out during round five at a wet Penybont and is a doubtful starter for this weekend’s event.With this super series racing towards its conclusion,also watch out for Richard Lloyd,third overall at Penybont,Joshua Williams,Luke Ryder,Richard Hathaway,Sam Callow and another 125cc pilot Aston Illsley,all riders looking to improve their final standings.

After claiming the AMCA Open class title back in 2005,Gloucester based Simon Lane is now within touching distance of another AMCA crown.At present,Simon leads the 2014 AMCA Veterans Championship chase by a whooping 111 points!!.During the last three rounds at Norley,Spirt Hill and Penybont,Lane has blasted to nine out of nine moto wins,displaying terrific form in the process.Whilst Matt Ryder,his closest rival in the title race,had his points scoring potential restricted at Penybont due to a moto one DNF and a sore ankle injury,Martin Atherton took full advantage to close the gap in 3rd.Mounted on a 250F Honda,Atherton was in brilliant form at the Welsh venue,chasing Lane home in all three moto’s to earn a richly deserved 2nd overall as Stephen Baddeley took 3rd.At present Baddeley is 5th in the Championship table just behind Brian Staples whilst Colin Conduit,Shaun Copeman,Marc Bates,Lee Bayley and John Heath complete the top ten.In the separately scored class for Veterans Over 50,John Hawkins leads the charge from Glyn Moreton and Brian Jones.

The Ollerton circuit will be signposted off the A53 and A41 from Turn Hill Road with the postcode for satnav users being TF9 2BS.

The IMBA MX2 European Championship also reaches it’s penultimate round this Sunday as Team AMCA Great Britain travel to Wingles in Northern France.Although Dutch ace John Cuppen looks odds on to nail his third IMBA MX2 title as he leads the current Championship chase by a big 136 points advantage,it’s still all to play for in the race for the remaining medal positions.At present just a very narrow 18 points separates British star Scott Mathia in a brilliant 2nd,Roman Mnuk 3rd,Ralph Hubers 4th and David Scoch in 5th.And,with only the Dutch round still to come,Cheshire Charger Mathia will certainly be hoping for a major points haul on the hard pack dirt of Wingles this weekend to give himself a realistic chance of eventually claiming that IMBA silver medal!!.

After crashing hard in the previous IMBA round held at Norley in Great Britain,Paul Neale will also be looking for a big result in France to thus move up from his current 9th place in the standings whilst fellow Brit Ryan Morris sits in 10th despite missing round four in Denmark.Both Neale and Morris have displayed recent great form in their home AMCA Championship so should be very confident of being right at the top end of proceedings at Wingles!!.

After a break of nearly three months,the 2014 AMCA Sidecar Championship chase returns this weekend as the Oakham MXC stage round seven at their Sproxton circuit.

At present five different crews have recorded moto wins but it’s Alan Peever/Tony Phillips who lead the charge for the title,39 points ahead of James Whitt/Tony Grahame.Indeed Peever is one of only a handful of crews who have been present at every round so far,so Whitt along with several others will be very determined to close that gap on Peever this Sunday!!.Other crews to watch out for include Paul Pelling/James Cuff,Thomas Mann/Neil Burke,Ed Turner/Kris Turner and David Keane/Paul Horton.Buoyed by his brilliant 2nd overall in last weekend’s IMBA European Championship round in Germany,Keane could well be considered as hot favourite to top the podium at Sproxton.This Oakham event will be signposted off the A607 at both Waltham-on-the-Wolds and Croxton Kerrial with the postcode being LE14 4RH.