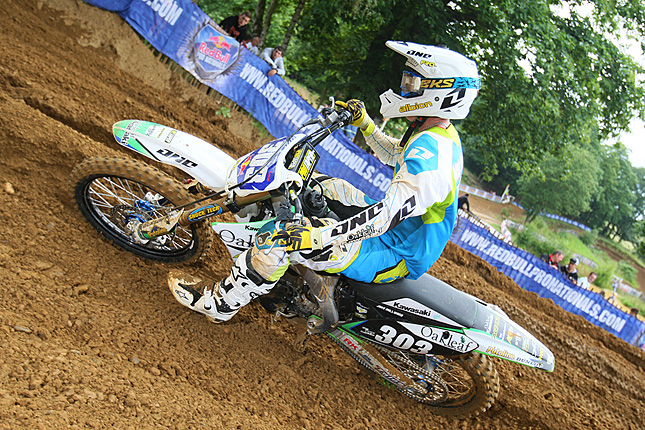 Oakleaf Redbull Round Up

With Jake Millward loosing the Rookie Class Championship lead at the previous round of the Red Bull Pro Nationals, the Oakleaf Kawasaki Team headed to Canada Heights in Kent for the latest round desperate to get their hands back on the leaders red plate and they did just that.

With Alex Snow and James Dodd also due to compete at the event on the Sunday in the Pro Class, Saturday’s focus was on solely on Jake as unfortunately the team’s other rookie class rider Tommy Alba is still sidelined through Illness, and after setting 4th fastest lap time in qualifying, Jake was confident of good results going into the days 3 races, with a further 2 scheduled for Sunday.

Race 1 saw Jake get away in 3rd place, he soon made a pass and put himself up into 2nd but despite being hot on the heels of the leader he couldn’t make a pass and crossed the finish line 0.4 seconds behind.

Race 2 saw Jake in 2nd from the start but again behind race 1 winner James Harrison, this time though Jake did find a way past just after the halfway stage and he then went on to take the race win.

A textbook performance from Jake in race 3 saw him take the lead from the drop of the start gate and go on to take the win without really being challenged.

Jake’s Saturday performance and already seen him overhaul Dan Thornhill for the championship lead and with everybody looking forward to extending that lead and some good rides from Alex and James in the Pro’s, disappointment struck on Sunday morning as a massive deluge of overnight rain and with more forecast throughout the day the organisers took the decision to call off the day’s racing before a wheel could be turned in anger.

Whilst it was disappointing to not see any action on Sunday, Jake and the Team were still overjoyed to leave with the Rookie Red Plate and Jake now has a 24 point lead with 4 rounds remaining