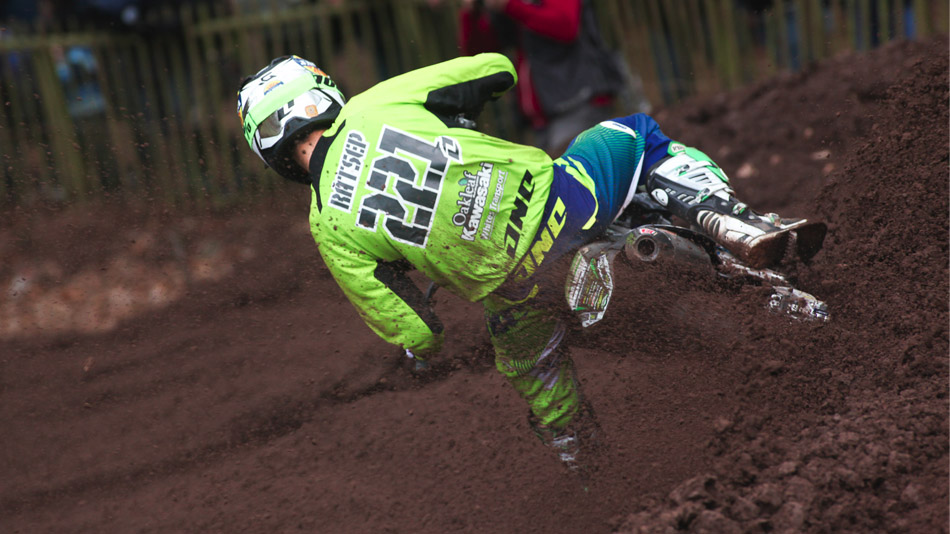 Hawkstone Park’s International in late February always signals the start of the outdoor season, and for Oakleaf Kawasaki this was the moment to see how things are for the season. With all three outdoor riders raring to race, it was good to have only overcast skies and wind instead of driving rain throughout the day.

For British Championship riders Priit Rätsep and Shane Carless, the qualifying session in the morning showed promise; both riders qualified within a second of each other in thirteenth and fifteenth respectively, while AMCA rider Luke Mellows found himself further down in the list in twenty-eighth.

For Carless, this round was a test of strength and fitness after several injuries late last year. In the first race he found himself scrapping for positions just outside the top ten, taking eleventh at the chequered flag. The second race improved by several places; running in eighth in the latter half of the race, he was looking strong. A last-lap crash however dropped him back out of the top ten and he had to make do with a thirteenth place and a twelfth overall. The super final however ended before it really began. After several crashes in the first two laps, he pulled in for his own safety.

Rätsep struggled with the track throughout the day, much to his disappointment. The fast pace was a surprise, but he was determined to make the best of the situation, ending in sixteenth in the first race. The second race showed a significant improvement with Rätsep hitting his peak in eleventh place before having to concede it to fellow Kawasaki rider Yentel Martens. The combined score left Rätsep in fourteenth on the day. The combined-class super final at the end of the day saw him return to end sixteenth from a bad start in the lower twenties.

Mellows had to recover from a mid-pack start in his first race; with the top twenty just out of his reach for the majority of the race, he made his move with two laps to go, and earning his first points of the season. The second race was again a very consistent run, this time several places higher in eighteenth for a twenty-first overall on the day. The super final ended five laps in after several crashes twisted his front end and he felt it best not to continue.

“Today was good for me; obviously for me today was the first race back, I’ve been out for a good couple of months now. I had a shoulder injury and came back just after Christmas and then had a knee injury. Coming into this race I wasn’t 100%, but I thought I’d come to the race and see what we can do and see where we’re at. This is the seventh time I’ve ridden this season, the first race was good, had a good start, I was riding a bit too tight and managed to take eleventh. Second race had another good start and back up to seventh, was riding comfortably and crashed on the last lap and ended thirteenth. I was going pretty confidently into the super final, was a bit tired but had a decent start, was going good but had a stall on the uphill and three crashes and bent the clutch lever, so I just decided to pull off just to be safe before the season kicks off.”

“Today didn’t go as good as I expected when I came here, but I’m healthy and going away from here in one piece, so that’s something positive. I was struggling all day, I haven’t trained on a fast track in a long time, so I had arm pump and just didn’t have the speed today. But I now have three weeks to prepare for Landrake. I’m happy with the team, the bike works great, it’s just me who wasn’t on his game today, but I hope to make a change for Landrake.”

“I’m happy with how things have gone today with the new team and the new bike. I haven’t had a lot of time on the bike and it’s due to the weather, so today we decided to use the training bike because I haven’t had any time on the race bike yet. I used to day to blow the cobwebs out. Starts weren’t great but I rode hard to the end of both races, ended up with an eighteenth and a twentieth which put me in the super final, where I unfortunately had a first corner crash. Once I got back on the bike I felt good, but I had another silly little crash at the end of lap three or four, so I’m not happy with that. I twisted the front end up in the last one, so I ended up pulling in. The team is great, they’re working hard to get things under way for the season, and I look forward to getting out on the race bike this week and for me, the first race out on it will be the South West Premier on March 9.”

“I was overall happy with today as we always treat Hawkstone as a warm-up event for the entire team. Getting back under the awning was good; with a few little tweaks we will be ready for the first British Championship in 3 weeks at Landrake. Both Shane and Priit rode well, silly mistakes cost them their realistic overall, but both are chomping at the bit now to be on form for the first British round. Shane’s off-season injury has set him back, but yesterday’s riding shows he’s already on last year’s pace. Priit showed he is more than capable of being a top ten contender in the British; a bit more bike time on the KXF-450 and he will get stronger, but for sure the track was hard work and physical on all riders which is also good for pre season. The lads’ minds are set and now they know where they’re at.

“Not doing something like Hawkstone, I feel, can add pressures to you at the first round of the season, but for sure the guys are now confident in their task ahead. Our AMCA rider Luke Mellows also joined us under the awning this weekend and he has been preparing well. Riding the pace at Hawkstone is keeping him in good shape for his championship goals; he’s a fit lad and has great ambition. We are looking forward to his successes this year.”