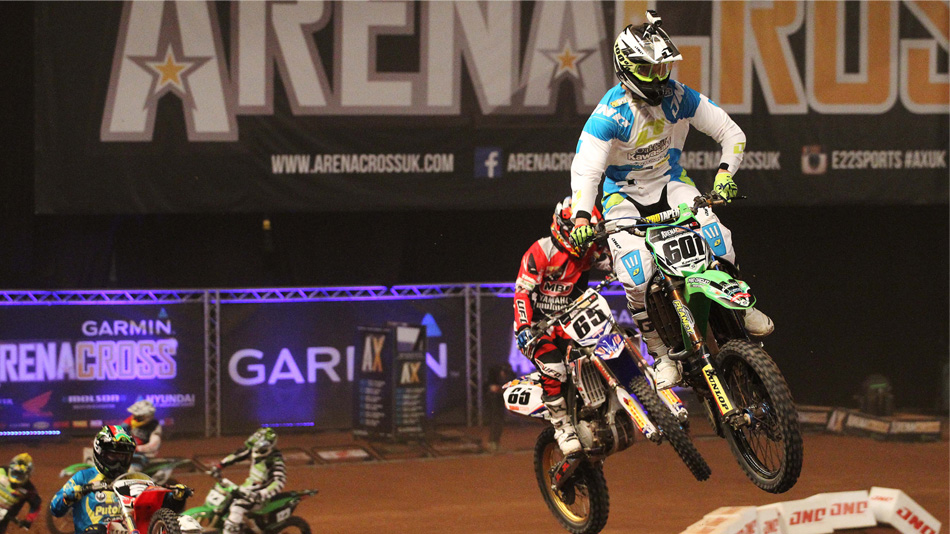 After a disappointing start and more disappointing news mid-week, it was with a sigh of relief and happiness that Oakleaf Kawasaki left the LG Arena in Birmingham on Saturdayevening after a successful third round of the Garmin Arenacross Tour.

For replacement rider Romain Biela, it did not take very long to get back into the swing of things; he soon put in some fast times that put him in seventeenth overall in qualifying. His American team mate Tyler Villopoto also shook off jet lag and bad memories of the weekend previous; he qualified much improved in twelfth.

The evening’s races went very well for Biela: a sixth and a third in his heats gave him a good enough position to progress to the main and also have a go in the head-to-head sprints. The main didn’t go quite as planned. Caught in the first corner, Biela had his hands full fending off strong competition from behind to end the event in sixth.

The gremlins came out for Villopoto for a third time. Although his first heat garnered him an eighth place, his second heat saw him on the ground yet again, relegating him to the LCQ. Once there, he put in a great effort in sixth, but with only two spots transferring to the main, that was him out for the evening.

“Well, obviously the conditions out there were a lot better this weekend, we had French rider Romain Biela stepping in this weekend for the injured Jack Brunell. It’s his first time on the bike, he hasn’t ridden for a while, so it was good to see him get the team into the final. Tyler improved in qualifying but again crashed out in the heats, but he looked good when he was on it. We just need him to concentrate on his first few laps and get in a rhythm earlier. The team is going home happy!”

“It started off alright, this morning the track conditions were much better, I was optimistic about the night and qualified somewhat decently, and then just washed my front end out and fell on the first turn with someone else and it just turned into last weekend as well. It’s definitely not ideal, but I felt a hundred times better and more comfortable. They have the speed here for sure, and just like everyone else I just have to put it all together, get a decent start. That’s what it comes down to, the race is so short, it has nothing to do with conditioning, it’s getting the start and keeping it on two wheels and staying out of trouble, off the ground and I was on the ground all weekend. I’m taking some positives from this weekend, and this week I’m going to do as much as I can to prepare for next weekend and at least get into the night show for these guys.”