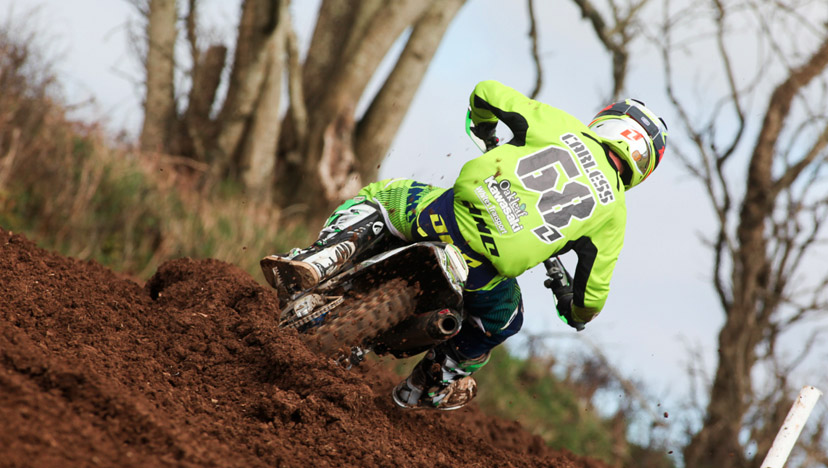 Oakleaf Kawasaki goes top twenty for first round of the Maxxis

Oakleaf Kawasaki aimed to impress at its home round of the Maxxis British Motocross Championship at Landrake in Cornwall. With the sun out and the track perfect, it was a good place for riders Shane Carless and Priit Rätsep to start their championship campaigns. The round did not go quite as planned, but nonetheless, a good meeting was had by all.

Qualifying for the MX1 class got underway on a wet track; Rätsep finished the qualifying session in tenth, a position he did not improve on during the super-pole. Qualifying for Carless was a bit of a nightmare as he struggled to get a clean lap in after resolving niggling issues with his setup, and he finished the session in twenty-ninth.

Rätsep’s first race started in the back with a bad start, but he soon made rapid progress up the pack to settle into sixteenth to give his pumped-up arms a breather. Keeping others from passing him became the priority and he finished in that position. The second race was a repeat of the first, although a massive crash after entering the points relegated him back to the rear of the pack, from where it was difficult to make much progress. The final race finally showed promise. In the top ten soon after the start, he made a small mistake that cost him five places, from which he recovered one to end fourteenth, and nineteenth on the day.

For Carless, the first race was arguably the perfect race. A blinder of a start launched him into the front of the pack, where he kept pace with several big names in the class until he went across the finish line in sixth. The second race proved to be somewhat tougher; nevertheless, Carless retained a top fifteen position for a finish in seventeenth. In the third race, Carless wrung out every ounce of power he had to recover from a crash early on, returning to hover just outside the top fifteen again until the last lap, where he picked up a place with just corners to go. With everything tallied up, he ended the weekend overall in twelfth.

Today was the first big race of the season, a lot of pressure, a lot of nerves, went out for qualifying and was riding tense, wasn’t myself, and just couldn’t get a clean lap in. we had a couple of issues, but we managed to solve the problems and came out of qualifying in twenty-ninth, which is the worst I’ve ever done in qualification. In the first race I thought let’s get a good start and run with the top boys, and I had a really good start and pulled through and was sixth, which I was very pleased about. Second race was not such a good start for me, the track was really rough and slippery, and I pulled through to seventeenth. Obviously because I haven’t had much bike time during the winter, my body was getting really tired, so in the last race I really struggled and pulled through to fifteenth.

The weekend actually started off quite ok, I was tenth. The first two race starts were really really bad. In the first race I also struggled with really bad arm pump and finished sixteenth, which I was not happy about. In the second race I had a huge crash, I came together with another rider and the race was over from that point on, I just lost too much time. The third race start was good, I think, I showed some speed, was battling with other riders, I think I was eighth before I crashed again. It was a silly mistake, but what are you going to do? Overall today was quite miserable, I’m looking forward to better results, at least top ten. I have a Dutch championship race next weekend, so I’ll have some more time on the bike and be ready for Lyng.

It was great to arrive at the Landrake and see perfect conditions for Round 1, and for us as a team to be able to unveil our new setup for 2014. Rätsep showed great speed in qualification in sixth up until the last few minutes when he dropped to tenth but we were happy to see him in the super pole on a track that he has hardly any experience of. When it came to the races, the first two didn’t go quite to plan but he showed great pace in the third where he was choosing some great lines and picking riders off every lap coming from twentieth to ninth at one point, which was great to see. He has great potential against a stacked and exciting field. A small crash pushed him back but with more race time with the race bike, I’m confident he will find his feet and gain some great results.

With Carless we have been finding it hard to satisfy his needs at the moment, with the setback with a pre-season injury, it’s a bit 50/50 regarding fitness and race bike time; he showed his capabilities in race 1 with a sixth position, but the rest of the day was very out of character of the hard aggression we are used to seeing on track with him. I think he used up a lot of energy in the first race and with the power our bikes are producing and the lack of fitness on the race bike it will only be a good outcome once Carless is on his game, he’s beating himself up at the minute and he’s putting pressure on himself when we all know what he is capable of. Having the first round out the way will for sure loosen the boys up a bit and improvements will be needed in their starts ready for Lyng.