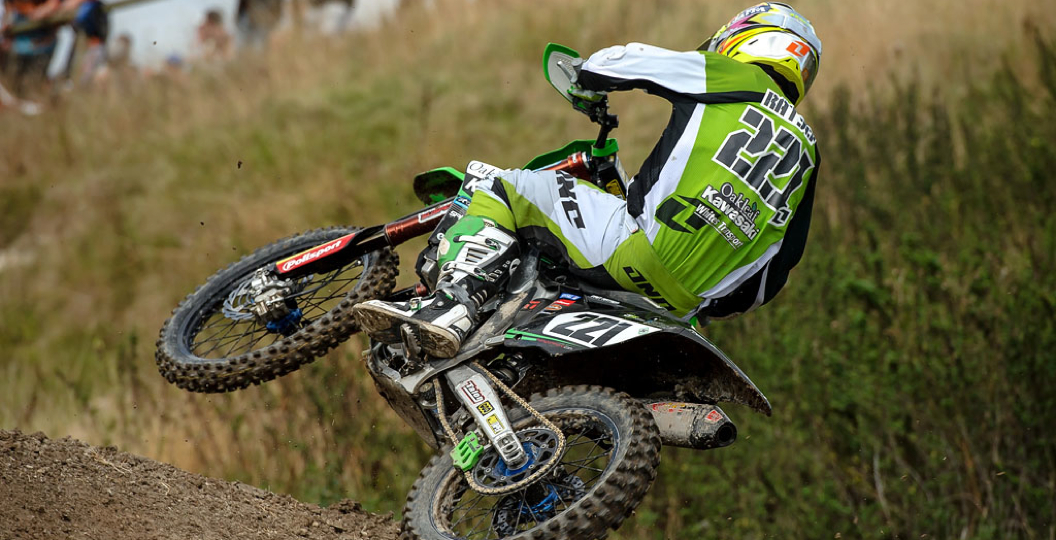 The final round of the Maxxis British Motocross Championship returned to the iconic Foxhill venue in Wiltshire this past weekend, an hour or two up the motorway from Oakleaf Kawasaki’s home of Taunton. After the venue was summarily cancelled due to heavy rain earlier in the year, this time around, everything ran to plan.

The team saw the return of AMCA rider Luke Mellows, joining Shane Carless and Priit Rätsep for another go at the big championship. Qualifying saw all three riders grouped closely together around twentieth, with Carless recording a time but a fraction of a second faster than Rätsep and Mellows.

Carless, despite another shoulder injury picked up at the penultimate round of the MX Nationals, put in the most solid performance of the three. Just outside the top fifteen around the first race start, he rode more conservatively to avoid mistakes, finishing sixteenth. The second race saw him get underway inside the top fifteen before he settled into a solid run in fifteenth to the end of the race. The final race also was a consistent run in the top fifteen again, with Carless ending fifteenth again for a sixteenth place overall, and a seventeenth place in the championship.

Rätsep had somewhat of a harder time. With this being his first time at Foxhill, he was understandably nervous of this fearsome track. Off to a start outside the top twenty, Rätsep fought his way back to eighteenth at the end of the race. Much to everyone’s dismay, the second race was a complete disaster. After a painful tangle in the second corner after the start, Rätsep tried to soldier on, but realised that it was probably best to pull off and regroup for race three, in which he subsequently put in a very consistent result in seventeenth for a nineteenth place overall on the day and a tenth place in the championship.

Mellows had an awesome first race start, but was caught out by some faster rivals. After settling into a rhythm, he held his own against some tough competition to end the race in twentieth. The second race saw Mellows start mid-pack, where he was caught up in several battles again and had to concede a couple of positions to end the race in twenty-third. As with his team colleagues, Mellows put in a consistent ride in the final race too; a start in twentieth ended a place up in nineteenth, crossing the finish line but yards behind his team mate. The overall saw him just outside the top twenty, in twenty-first.

Today’s not been good, but at least I’m still in one piece. The track was so scary for me, personally, I would’ve preferred riding Foxhill in the middle of the season, not the end, but hey. First race I was eighteenth, second race I had a bad crash in the second corner and DNFed that race, and in the last race I was seventeenth. Still, the positive thing is that I stayed in the top ten in the championship, and I think it’s not that bad for my first year. Oakleaf Kawasaki did a great job again this weekend, I can’t fault them on anything, so thanks!

I was looking forward to this weekend, I had two weekends off, I’d just hurt my shoulder at Preston Docks. Qualifying was going good, I felt really good on the bike and qualified in fifteenth, then had a small problem with the bike and dropped back to eighteenth. In the first race I was feeling really nervous, I had a really good start and just dropped back to finish sixteenth. Second race, didn’t have a good start, but came through to fifteenth. Last race I felt really good, I felt fit on the bike and the bike was really awesome, I came back to fifteenth, not bad going considering i’ve been off the bike for two weeks.

The weekend was good! It was nice to have another go at the British, Obviously once I started going out there I wasn’t going to have a break, but that’s good, it keeps me honest for my last AMCA round and it takes my mind off it a little bit. I’m going into the last round with a fourteen-point lead, so I’ll keep it on two wheels next weekend at a local club event and then go to Norley and come away with a win.

Well, another season over in the Maxxis British championship; it’s been an up and down year but again a pleasure with all the riders. Our results have been sometimes really good but this year we have lacked publicity with good exposure, only the bad luck has been talked about, but I suppose that’s the pressure you gain at the top. Kawasaki have said that we won’t be the official team next season which has been the biggest blow. One year in the saddle, a strong bike that has never gone wrong and we lose the budget, so back to a privateer team next season with a different approach. Our sponsors have been awesome and they’re to thank with how well our bikes have been, as well as the awesome effort all year from the team mechanics Chris Talbot and Ian Bailey.