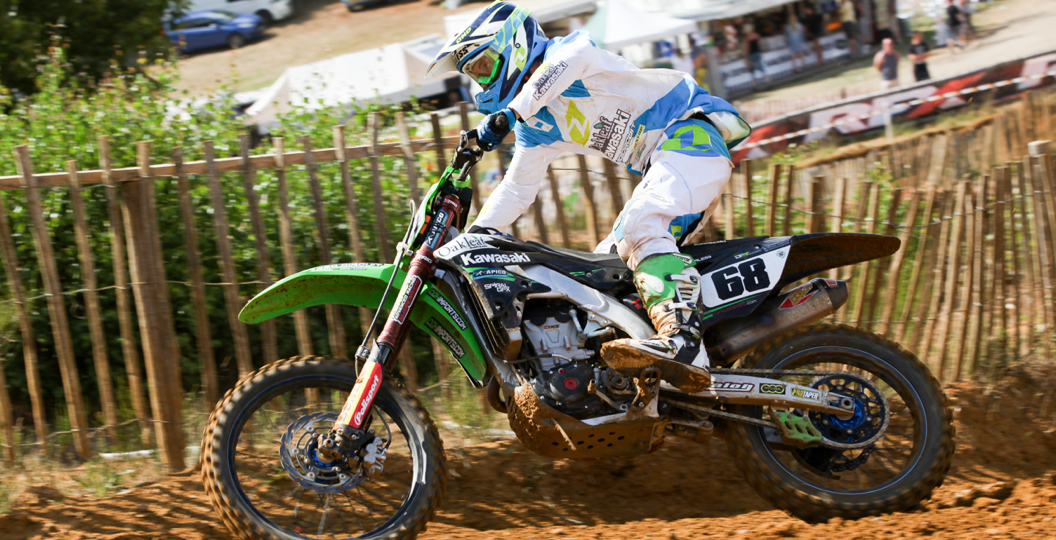 With several major championships in the United Kingdom and Europe coinciding, Oakleaf Kawasaki’s Shane Carless made the trip to Canada Heights in Kent for round five of the MX Nationals, while colleague Priit Rätsep parked up his van in Lommel, just down the road from his base in Belgium, for the fifteenth round of the motocross world championship. Carless was also joined by Oakleaf Academy rider Ben White in the Under 16 class.

Both Kent and Belgium enjoyed good weather throughout the weekend, but conditions deteriorated towards the afternoon at Lommel, making the already tough circuit even more challenging.

On to Kent. Saturday morning saw White qualify fifth in the Small-wheel 85 class, before heading out for his first race. There he made some good progress, passing several of his rivals in one lap before ending eighth in his class. The second race on Saturday saw White suffer an early loss, but he then caught a second wind to end two positions up in seventh. On Sunday, White had a solid first race in eighth throughout, while the final race of the weekend again saw him make some early gains before dropping back to end the race eighth again for a solid eighth place on the weekend.

Carless ended his qualifying session in ninth, only to find that he would only get the twenty-fourth gate pick due to a decision to combine the Pro classes. His only race on Saturday saw him put in a solid ride in seventh place before tweaking his knee and falling back a place to eighth.

The knee still painful from the previous day, Carless opted to test the waters and see how things went in the Sunday morning practice session, before deciding to risk it. The first race did not go to plan at all. An early crash made matters worse for him, but despite riding purely on the pegs, Carless recovered two places to end in eleventh. The final race got under way with Carless in ninth, but another crash mid-way put him back into the back of the pack, from where he recovered to eleventh place for a tenth place overall on the weekend.

In Belgium, Rätsep tried his best for a good gate pick, ending seventeenth. The qualifying race itself ended in the same place despite some good gains after the halfway point. After a good night’s rest, Rätsep lined up for his first race. Despite a crash on the start, he made upward progress throughout the thirty-five minutes to end fourteenth. After an hour’s rest, it was time to line up again, and this time Rätsep got off the gate much better. With rain starting to fall harder and harder, Rätsep attempted to fend off an attack by Rui Goncalves, but had to concede his fifteenth place to finish the race in sixteenth for a sixteenth place overall.

Soo, fourteenth and sixteenth with races this Sunday in Lommel! First race crashed first lap and had to work hard! I was happy with my riding in the first race and also half of the second race. End of the second race I got tired and lost a bit of focus… Also the rain came down really heavy end of the last race! But overall Lommel was a good weekend and I’m healthy for next weekend at Cusses Gorse! Big thanks to Chris my mechanic for doing great work with my bikes!!

I was looking forward to this weekend, Canada Heights is one of my favourite tracks. I did quite good in qualifying, but just in the last lap I managed to pull something in my knee and so the first race of the weekend was tough for me, I got up to eighth. Overnight the knee swelled up, I went out for practice and didn’t think I was going to race, but I just took some painkillers and went out there and rode on the pegs for two elevenths, which came me tenth overall this weekend.

Ben White this year has been consistent; he’s been training really hard and his dedication is 100%. He’s had the confidence in going to the top championships in the UK and has always come away being more determined too, his results the weekend were good, but each time he’s gaining more speed being in the faster class with the mixed Under 16 age group.

Shane has be suffering a lot lately with small injuries, injuries that don’t side line you but also making you not 100% fit. So, he’s been riding to claw as many points as possible to keep him in contention of least ending the year in the top ten of the championships. He got off to an average start but that seems to be something he has always struggled with qualifying! He made a half decent start from a bad gate pick being in the mixed group, riding with a bad hand maybe cost him this time in concentration with twisting his knee in one of the corners. He managed to end the race with some good points. After the nights rest he woke to find his knee swollen, but right or wrong, Shane still wanted to gain more points, so he decided to race Sunday’s races knowing there were a few top names missing to gain some good points. Now to make a decision on next week at the Maxxis British Championship at Cusses Gorse.

With the championship changes at the start of the year the team were always wanting to do three GP rounds this year, Matterley Basin, Valkenswaard and Lommel. With the changes of the Pro Nationals folding, this made a massive impact on the team’s decisions this year; both riders would have been fielded if it wasn’t for Shane’s injuries. Priit made a great weekend against the top names in the world, and it was great to see him come through the pack in the first moto. He is obviously a great sand rider but is becoming more confident on the hard pack as the year progresses, and with the first season under his belt, he is learning the UK tracks too. To see him smash out some great results in the world GP at Lommel was great for the team.