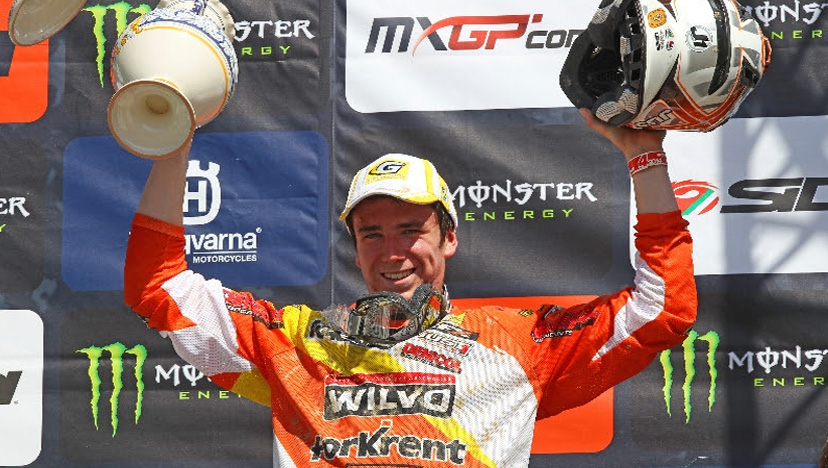 Nicholls takes a sixth in Spain

Talavera de la Reina, Spain – 12 May 2014: It was a busy weekend for the team with all four Wilvo Forkrent KTM riders competing in a packed weekend of racing at the natural Spanish track. Alongside the MXGP pair of Jake Nicholls and Matiss Karro, Adam Sterry contested the second round of the EMX250 class and Kenny Van Dueren, back after eight months off with two successive injuries, was in action in the second round of the EMX300 class.

Qualifying:
In MXGP class Nicholls finished the qualifying race in 12th with Karro in 15th. Sterry was 7th in his timed qualifying session and Van Dueren was 2nd in his.

MXGP
Race 1:
Both riders knew how important it would be to get a good start on the one lined track but neither of them managed to do so, especially Nicholls who went too early and ended up stuck in the gate leaving him dead last. Karro wasn’t in such a bad a position in 11th but lost a place to Philippaerts on the second lap. He managed to hold his position for the first half of the race but tailed off a bit in the second half to finish in 14th.

Nicholls seething after his start line mistake, got straight into the groove and was soon into the field actually finishing the first lap in 18th place. He rode a strong race, with good lap times throughout and managed make passes to move up to 13th at the finish.

Race 2:
After changing the set up on his bike for the second race to help him off the start, Karro proved that the decision was correct as he rounded the first turn in 5th. Nicholls didn’t fare so well and was only in 14th but he was on a mission and within two laps was up to 10th place.

Karro hit neutral on a corner which cost him places but he was still in 8th, however he was suddenly taken out by Ullrich’s bike as the German crashed with the impact damaging Karro’s throttle leaving him no choice but to withdraw from the race.

Nicholls continued his charge through the field setting a great pace as he moved through to 8th by mid-race. On lap nine he set his fastest lap of the race which was actually faster than every other rider in the race leading to him disposing of Philippaerts for 7th. He now had Bobryshev in his sights and the Russian handed him 6th as he crashed. With the gap to 5th being twenty five seconds all that was left was for him to maintain his pace to the end to secure a fantastic 6th place finish giving him his first top ten overall in MXGP in 9th.

EMX250
Race 1:
Sterry made one of his customary good starts in 4th but struggled with the over-watered circuit and lost five positions in the first two laps however, he gradually gained confidence and built his speed throughout to finish in a good 7th place.

Race 2:
Sterry made another decent start and was right in the mix again after making a couple of early passes to put him in 5th. He pushed hard and closed in on eventual overall winner Clarke and was clearly faster but with the track being very hard to pass on, he just couldn’t find a way through. The two of them closed in on the front three that got away early on and a four-way battle ensued for 2nd place behind race winner Jaulin. Sterry rode superbly but just couldn’t improve his position and ended up crossing the line in 5th which was good enough to give him his first podium in the class with 3rd overall.

EMX300
Race 1:
Van Dueren went head-to-head with Championship leader Bernardini down the start straight, however Van Dueren braked too late into the first turn losing his advantage and leaving him in 3rd. He was soon promoted up one place when Bernardini hit the deck but had to concede the place to Latvian Macuks on lap four. Despite intense pressure from Maddi in the later stages he managed to hang on for a deserved 3rd place.

Race 2:
Van Dueren didn’t make such a great start in race two and only managed 4th. With the track being newly watered, it made it extremely slippery and after being sidelined so many times in the last few years it was no surprise that Van Dueren chose a cautious approach which resulted in a 5th place finish for 5th place overall.

Commenting on the weekend Jake Nicholls said: “I’m very pleased, I felt good on the bike all weekend here. After hitting the gate in the first race and riding well and back up to 13th, I was very frustrated as I knew I had a lot more to give. I started mid-pack in race two but rode strong throughout and passed my way into 6th. I felt good and was happy with the bike and my fitness was spot on in the hot conditions.”

Matiss Karro added: “First race I had a bad start but in the first couple corners moved up to 11th and for the first half of the race it felt good. After half the race I lost my speed and dropped few places and finished 14th.

“Second start was good and I went 5th but made a little mistake and lost my line in the corner when riders got past me. Second lap I found my speed but a rider in front crashed and I couldn’t avoid him and hit his bike. It hit my fingers and twisted the throttle and I had to go in pit lane where I lost too much time and had to pull out. Need to find my luck now and start to get some better results.”

Competing in the EMX250 class Adam Sterry added: “I liked the track from the off, it flowed really nicely and suited me a lot more than Bulgaria and in qualifying I posted 7th fastest time which was good enough for a good gate pick.

“The first race I got a good start in 4th but on the first two laps I was too cautious on the heavily-watered track and dropped to 9th and finished 7th at the flag which was disappointing but still a decent result for the overall. Race two I didn’t get as good a start as I wanted but I was more aggressive in the first two laps. I felt good and battled all race to come home 5th. It was a surprise to me that I was on the podium so when I got told I was so happy. I’ll take the confidence and keep improving each week!”

Kenny Van Dueren competing for the first time for the team in EMX300 commented: “First race was OK after such a long time off the bike. I was pretty happy with 3rd and thought I could do better in the second race but the track was so sketchy after watering the track and I just didn’t have the confidence to push so could only finish 5th. I know I can lap much quicker and when I get more confident I will be on the podium for sure.”

Team Manager, Steve Turner summarising the weekend said: “That was a frantic weekend of racing but on the whole we did well as a team with Adam and Jake having great rides. Matiss had a few problems with the bike being too aggressive in the conditions in the first race, so we made some changes to the gearing that we also thought would help him out of the gate. He took full advantage with a great start but he was then unlucky to be hit by another bike that meant he had to retire. He’s obviously disappointed but he needs to focus and try to get some good results in the coming weeks.

“Jake had a messy start in race one but showed how fast he was as he got all the way back to 13th. I knew he could run in the top eight if he got a good start but he didn’t get such a good one and I thought we would be lucky to get a top ten. He rode such a strong race though and reaped the rewards with a tremendous 6th. Hopefully he will continue his form onto Matterley in two weeks time.

“Adam rode the best I’ve seen him at this level. He was fast all weekend and in the second race he never let his pace drop. He’s growing in confidence week by week, which is great to see.

“Kenny performed well on his first ride back after eight months off due to injury. As he gets race fit and builds his confidence he will definitely be battling for wins in his class.”

The team head to round eight of the World Championship and round three of the European Championship  at Matterley Basin in Winchester on the 24th & 25th May.