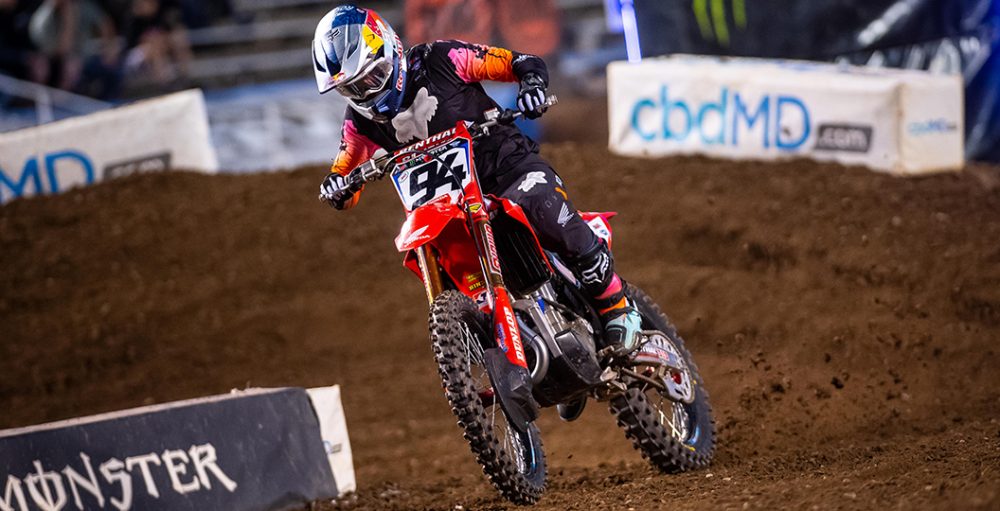 The latest edition of Monster Energy Supercross – The Official Video Game has been unveiled by Milestone and Feld Entertainment, Inc. The title, which will be released on March 17, will include a more in-depth career mode, as well as split-screen mode for those playing in the same household. Those are the most noteworthy changes, as it appears that the game will be fairly similar to Monster Energy Supercross – The Official Video Game 4 for the most part.

Although the teaser has prompted criticism from fans, it is important to remember that the gameplay in those videos is not indicative of what the actual game is going to play like. Those videos tend to be built by players who are not familiar with the sport and thus do not know how to play it correctly. MX Vice is eager to get hands on a copy before release, to provide a true look at what Monster Energy Supercross – The Official Video Game 5 has to offer.

The latest release of the most beloved and realistic supercross video game will be available on March 17, 2022, on PlayStation®5, PlayStation®4, Xbox Series X|S, Xbox One and Windows PC®/STEAM. PlayStation version supports free upgrade from PS4 to PS5, Xbox version features smart delivery.

A renovated career mode is now even more real and immersive than ever before, where players can start as developing amateurs in the 250SX Futures while aiming to reach the heights of glory as a pro. Monster Energy Supercross – The Official Video Game 5 also introduces the ‘Rider Shape System’ that is an exclusive feature for career mode that will affect riders’ performances in case of falls or injuries. Training and completing specific tasks are key to quickly recovering and restoring your rider to always be in top form!

With Monster Energy Supercross – The Official Video Game 5 players will enjoy a new gameplay experience, enriched by two-stroke bikes that are now available in every game mode. For newcomers, the ‘Future Academy’ will provide all the information needed to take their first steps into the supercross world. This friendly tutorial will teach players the supercross basics to help them climb the ladder from beginner to pro; it also provides many in-game options that will make races accessible for everyone. Those will impact flow recovery, assisted steering and many other technical aspects aiming to create a gameplay experience suitable for every kind of player.

The track editor is also back with the classic experience of track creation, along with a new ‘Rhythm Section Editor’ feature. Players will be able to mix and match pre-existing modules to design complex prefab track sections, then be able to share them with the community.

After the amazing success of the past edition, the track editor contest will be back and another player will have the opportunity to create a track and enter the contest directly in the game. Users will have the chance to see their creation replicated in real life and being part of the official championship. This unique feature represents a once-in-a-lifetime-opportunity in the video game industry: a digital track designed by a player will be raced by real riders in the Monster Energy AMA Supercross Championship.

What about racing with friends or solo in a new, stunning, open world environment? The compound’s the answer, featuring new tracks, several cross challenges and collectibles to unlock additional gears.

Online multiplayer for the first time features cross-gen matchmaking and brings the challenge to the world scale. Monster Energy Supercross – The Official Video Game 5 also features the split-screen mode to play with friends directly on the couch!

After the incredible success of the past edition, e-sport is also coming back to Monster Energy Supercross – The Official Video Game 5. It pushes players to use all their skills and attitude to become a legend in the eSX Championship sponsored by Yamaha!