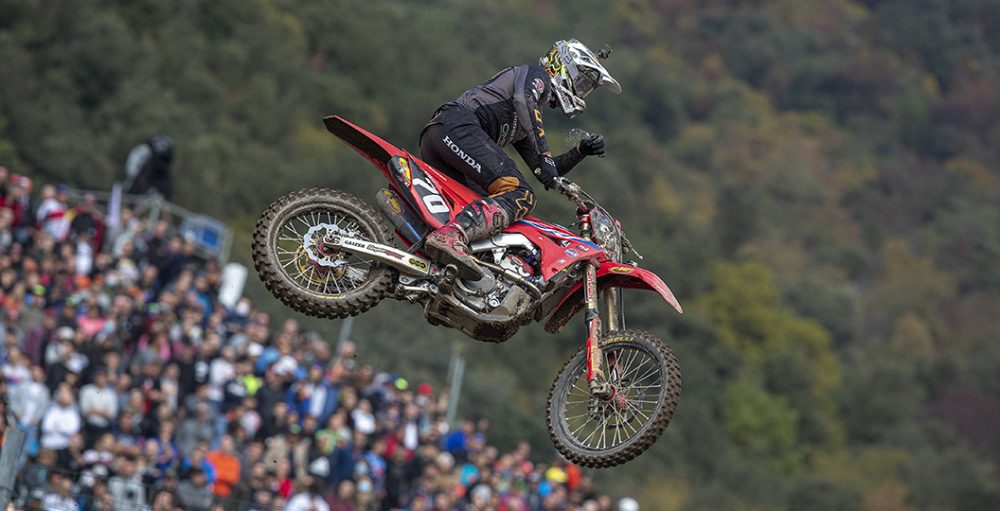 It is official that Honda 114 Motorsports’ Ruben Fernandez will ditch his CRF250R in favour of the CRF450R at the final two rounds of the 2021 FIM Motocross World Championship. Crucially, he is not going to be aboard the CRF450RW and will remain on the satellite Honda squad for his premier class debut. Although Honda label this as a “just reward for the Spaniard” following three successive podium finishes, there is no doubt that he’s making the move to assist Tim Gajser in the MXGP title fight.

Fresh off three MX2 podium performances in Trentino, Honda 114 Motorsports rider Ruben Fernandez will switch his Honda CRF250R for a CRF450R and ride in the MXGP class at the final two rounds of the 2021 season.

After a season where Fernandez has progressed a lot under the tutelage of Livia Lancelot, it is just reward for the Spaniard who held the MX2 red-plate earlier in the year and who has shown that when he is fit and healthy, he can battle with the fastest 250 riders in the world.

The final two races take place in Mantova, Italy, where Fernandez will continue pitting under the 114 Motorsports awning, to minimise the pressure that debuting in this extremely competitive MXGP already brings. He will be alongside Canadian Dylan Wright who has shown excellent speed since he came to Europe in October, as the pair hope to impress all the Italian fans who will be present for this intense finale.

With Fernandez able to ride in MX2 again next year, these two races will just be an opportunity for him to showcase his talent and see where he stacks up and give him a little bit of experience before he has to make the full-time switch to MXGP in 2023.

Ruben Fernandez: “I’m extremely excited for this opportunity to ride the CRF450R for these final two rounds. It is a great chance for me to just go out and enjoy myself at two races without too much pressure on my results. It is a very tough class right now, but I just want to ride well in four motos and show people that I am capable of riding the Honda CRF450R as well as I’ve been riding the CRF250R recently. It’s been two years since I’ve ridden a 450 and I will only have a few days of preparation and testing but I will do my best. It would have been great to have had more seat-time to get ready, however these past three rounds in Trentino have given me a lot of confidence and I can’t wait to get to Mantova next weekend. A big thanks to everyone who has helped me get to this point in my career and who has given me this opportunity next weekend.”