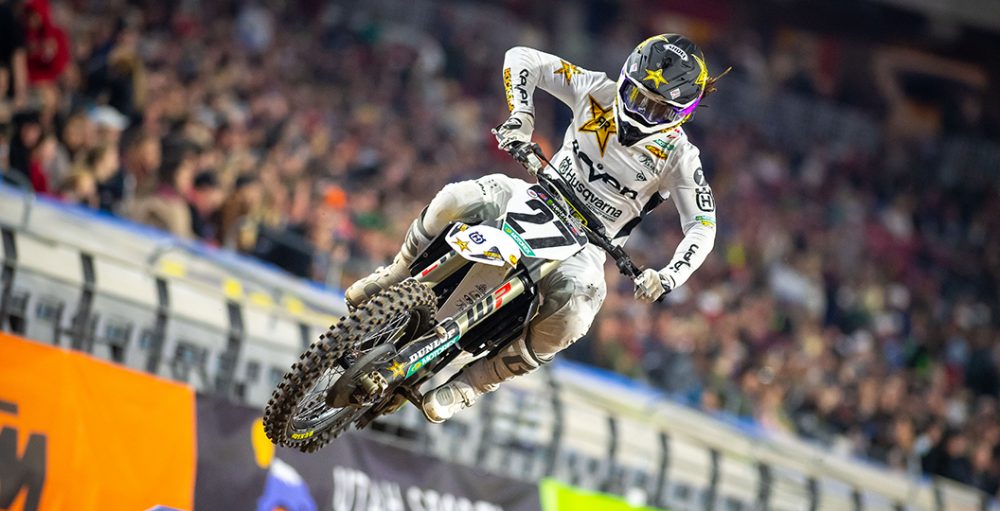 Husqvarna Motorcycles is pleased to announce an extension to its successful partnership with Rockstar Energy Drink for 2022 and 2023. The renewed agreement will see the energy drink giant exclusively direct its full support behind the North American sector of Husqvarna Factory Racing.

Beginning a highly successful collaboration in 2015 with the creation of Rockstar Energy Husqvarna Factory Racing, the team has enjoyed a wealth of achievements across multiple disciplines. Headlined by Jason Anderson claiming the first AMA 450 Supercross Championship title for Husqvarna Motorcycles in 2018, Zach Osborne secured two 250SX East titles and two Pro Motocross crowns during his prosperous time racing with the squad.

To celebrate the continued partnership between Husqvarna Motorcycles and Rockstar Energy, two exciting and innovative motocross models – the FC 450 Rockstar Edition and FC 250 Rockstar Edition – have recently been released. Featuring cutting-edge technology and complete with race-tested components, the motorcycles underline the strength of the collaboration and form the basis of the machines being raced by Rockstar Energy Husqvarna in the 2022 AMA Supercross season.

Roger De Coster (Director of Motorsport in North America): “Partnering with Rockstar Energy Drink seven years ago has led to many great milestones and achievements by the Rockstar Energy Husqvarna Factory Racing team in supercross, motocross, and off-road. We have won many races and multiple championships along the way, and just this last weekend we saw our newest 450SX racer Malcolm Stewart score a career-best second-place result in Phoenix, so we look forward to continuing to build on this great partnership. With new team manager Nathan Ramsey and crew chief Tony Hall along with longstanding team co-ordinator Sean Murphy at the helm of the supercross/motocross team, and off-road team manager Anthony DiBasilio in charge of our off-road program, we look forward to reaching even higher highs with the support of Rockstar Energy Drink throughout the upcoming racing seasons.”

Robert Jonas (Vice President Motorsports Off-Road): “After many successful years together and on behalf of Husqvarna Motorcycles, I am really delighted to announce that our partnership with Rockstar Energy has been extended. The relationship has undergone some changes in recent months but ultimately Rockstar Energy Husqvarna Factory Racing will continue to compete in North America in both AMA Supercross and Motocross, as well as in all off-road disciplines. Together with Rockstar Energy, we have achieved so much in recent years with multiple championships secured in both the USA and Europe. We now look forward to the coming seasons and achieving more success.”

Faby Torres (GM and CEO of PepsiCo Energy): “It’s been an incredible journey with Husqvarna Motorcycles the last six seasons. In shifting our focus to North American racing efforts, I have no doubt we’ll continue with our successful partnership. Rockstar Energy Husqvarna Factory Racing has been one of the best performing teams in the United States, giving our brand forward visibility. Looking ahead, with the riders and team personnel assembled for 2022, I’m confident we’ll continue to win more championship titles together.”