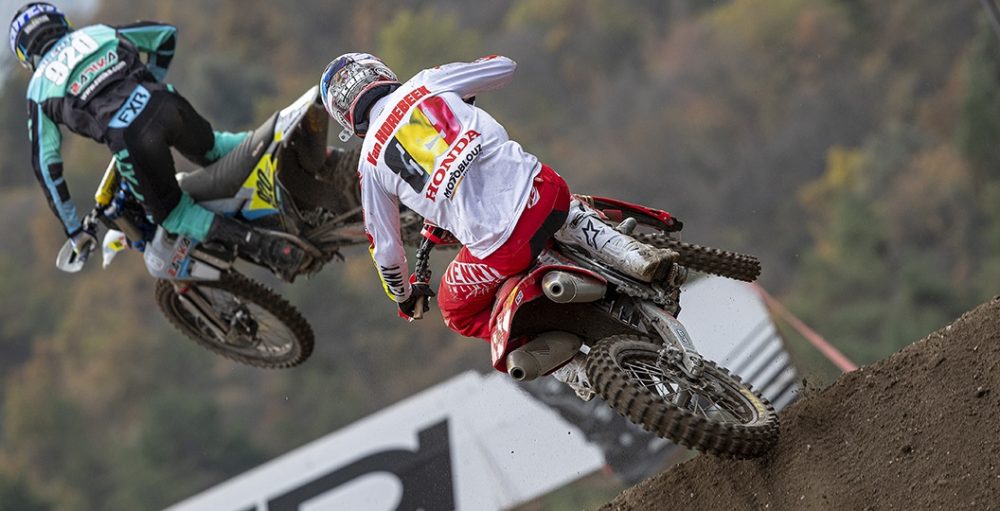 A bizarre turn of events unfolded in the second premier-class moto at the Grand Prix of Pietramurata today, as Van Horebeek got his leg stuck in the rear wheel of Tim Gajser’s CRF450RW. That’s happened many times, of course, but this time it was impossible to remove his leg. A mechanic had to pull the rear wheel off to free him! Fortunately, there were no major injuries and Van Horebeek is travelling home in one piece. An official update from Honda SR Motoblouz is below.

“We were scared when the race management waved the red flag in the second heat, after Tim Gajser and Jeremy Van Horebeek collided in the second corner. Jeremy ended up with his leg stuck in Tim’s motorcycle and the wheel had to be removed to free him. Twelfth in the first heat, Jeremy suffers from minor burns but nothing serious.”

Van Horebeek had already announced that the penultimate round of the 2020 FIM Motocross World Championship today would be his last of the season, as he’ll become a father any day now. It’s also been confirmed that he will not return to the French Honda outfit in 2021, so his future is uncertain. One would think that retirement could be on the cards, especially after the scare today.

“Tomorrow will be my last MXGP of the 2020 season! You all know that Glenny and I are expecting two baby boys and it can be any day from now, because this is something out of our power! I love motocross but this will be a day I cannot miss so it’s time to go home and be ready for the big day. I will give everything I have tomorrow, because it will also be my last race with @TeamHondaSR. I would like to thank Josse, the team, sponsors and everybody who has supported us for the past two years. What 2021 will bring is really unclear, so let’s have a great day tomorrow.”

Van Horebeek currently sits ninth in the premier-class standings and may lose that position on Sunday, but it is unlikely. It is certain that he will finish in the top ten, no matter what takes place at the season finale. A fifth in a moto was a season-best finish for Van Horebeek.