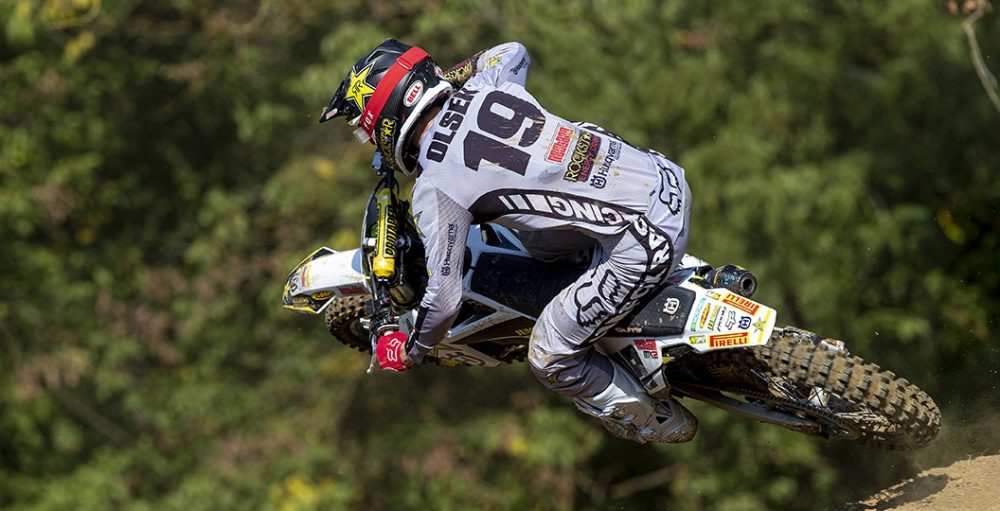 A major piece of the silly season puzzle has just slotted into place, as it has been confirmed that Thomas Olsen will slide into the MXGP portion of the Rockstar Energy Husqvarna Factory Racing. Olsen will take Jonass’ seat and sit alongside Arminas Jasikonis.

Husqvarna Motorcycles is pleased to confirm the signing of Thomas Kjer Olsen to a two-year contract that will see the 2019 MX2 World Championship runner-up move into the MXGP division in 2021 onboard FC 450 machinery. Thomas will compete for Rockstar Energy Husqvarna Factory Racing in the IceOne Racing team managed by Finn Antti Pyrhönen.

A well-established MX2 World Championship competitor, 23-year-old Kjer Olsen will continue what is now a four-year association with Husqvarna Motorcycles as he takes his first step into MXGP class competition. Producing numerous stand out performances over recent years including three MX2 GP wins, the Dane has unquestionably proven himself as one of the World Championship’s leading MX2 class riders. Finishing as runner-up in the 2019 MX2 World Championship, Thomas previously finished third in both 2017 and 2018.

Thomas Kjer Olsen: “I’m really happy to continue with Rockstar Energy Husqvarna Factory Racing, to be staying with the Husqvarna family and moving to the MXGP class with IceOne Racing. I really admire the team, I know they do a great job and I believe that it’s the best team in the MXGP class. I’ve been with Husqvarna for my whole MX2 career and we have shared a lot of success and I have a lot to be thankful for. I’m excited about this new chapter of my career and to be moving to MXGP. I’ve tried the IceOne FC 450 bike and it’s unbelievable. So light and powerful and as I’m a bigger guy I think it’ll really suit to my riding style. The MXGP class is so competitive and an exciting prospect. It’s full of established racers, many that have moved up from MX2 in recent years. I hope to quickly find my feet and settle into the class. I’m really looking forward to it all. For now, I am fully focussed on the MX2 World Championship. We still have a lot of races to go and then I can look forward to moving over to the new team and begin testing with the FC 450 over the winter months. I’m really excited for 2021 and racing in the MXGP class.”

Antti Pyrhönen (Rockstar Energy Husqvarna Factory Racing MXGP Team Manager): “Of course, we have been following Thomas since he joined the Husqvarna brand in 2017 and we know that he will be a great fit for our team, alongside Arminas Jasikonis. It’s a nice and natural progression to move from the Husqvarna MX2 team into MXGP with us. Thomas is hugely professional, his approach to racing and his results speak for themselves – placing top three in the MX2 World Championship over the last three seasons says a lot about his ability and focus. He is clearly fit, fast and strong and will ride the FC 450 to its full capacity. We have the 2020 season to complete but we are already looking forward to a great 2021 with our young team line-up.”