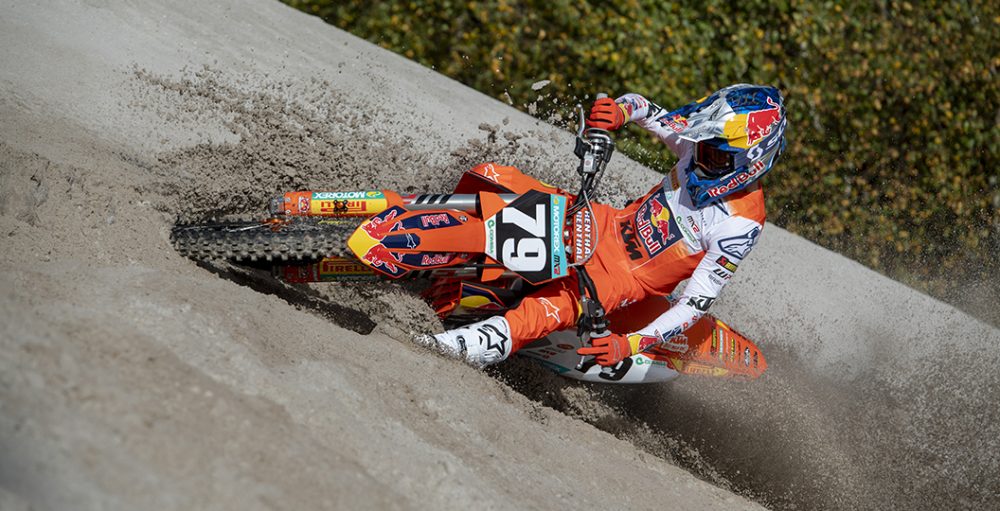 
The soon-to-be sixteen-year-old (on November 9th) will join Andrea Adamo and Liam Everts on the works KTM 250 SX-Fs for next season since impressing with his natural speed and dedicated attitude in European Championship competition during 2022.
Coenen, and his twin brother Lucas, will enter MXGP for the first time next year. He has been recruited by the orange crew and will use 2023 to develop his skills, racecraft and physique at the highest level. Sacha will link with countryman and former multi world champion Joel Smets to oversee his development. Smets guided double MX2 #1 Tom Vialle from EMX aspirant to two titles in just four seasons between 2019 and 2022.
Coenen will also be able to count on the experience of new Red Bull KTM Factory Racing Team Manager Tony Cairoli as the squad will now field a four-rider roster. Jeffrey Herlings will be the sole entrant in the MXGP class with the KTM 450 SX-F.
KTM’s freshest star was a moto winner in the 2021 EMX125 series and grabbed points in EMX250 outings in 2022 while still waiting for his fifteenth birthday. He could eventually follow Herlings, Jorge Prado and Vialle as full-time Grand Prix debutants with Red Bull KTM that went on to claim the gold number plate.
Sacha Coenen: “This a dream come true for me! I’m so happy to be joining Red Bull KTM Factory Racing. I have been riding the stock 2023 KTM 250 SX-F and love it so far and really like the power. I’m looking forward to working with Joel because I’m sure he can bring some things to my program that I don’t have. I know I have a lot to learn but I want to have fun and do as well as I can.”
Joel Smets, Red Bull KTM Factory Racing Team Trainer: “It is almost insane how much energy and motivation Sacha has, and, at the moment, he is the smaller of the twins! I don’t think I have ever seen so much determination and dedication for someone who is still so young. He still needs to grow physically and professionally and we need to work on the balance between his desire and his abilities. It will be a big challenge to guide all that energy…but we are really looking forward to it.”
Share
New Signing: Lucas Coenen Previous post
Race Results: Australian Supercross Round 2 Next post