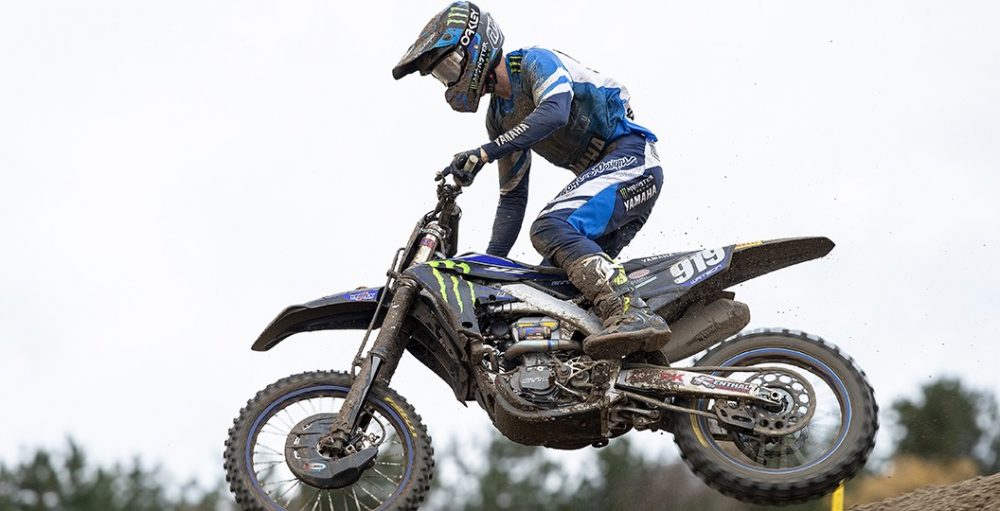 Ben Watson’s future has been secured, following a brilliant victory at the Grand Prix of Lommel. Watson will be on Monster Energy Yamaha Factory MXGP in 2021. Official communication is below.

Yamaha Motor Europe is pleased to announce that Ben Watson will take an exciting step up the Yamaha Racing pyramid and will join the Monster Energy Yamaha Factory MXGP team for the 2021 MXGP season.

The 23-year-old from Nottinghamshire, England joined Yamaha and the Monster Energy Yamaha Factory MX2 Team in 2018, where he celebrated his first podium finish and ranked fourth in the FIM MX2 World Championship in his first term on the YZ250F. The British rider has made great progress since.

Proving his potential, Watson bounced back from an injury struck 2019 season to add five more podium successes to his credit including a first-ever Grand Prix win at this weekend’s MXGP of Lommel. Immediately after celebrating his victory on the podium, the young Brit was delighted to learn that he would be drafted in the Factory MXGP team where he will campaign a YZ450FM in his rookie MXGP season.

Part of a strong strategy to develop the next generation of MXGP champions, the Monster Energy Yamaha Factory MXGP Team will remain a three-rider line-up in 2021. Watson will join Jeremy Seewer as the Swiss rider enters his fourth year with Yamaha and third year as Monster Energy Yamaha Factory rider, while the rider who will fill the third and final slot in the team will be announced in the very near future.

Ben Watson: “Firstly, I want to thank each and every member of staff in Kemea. The Monster Energy Yamaha Factory MX2 team gave me everything and more every day for three years. I am so grateful to join the Factory MXGP team and stay with my Yamaha Family. It means so much to me and I cannot wait for this new challenge. I have been lucky enough to work closely and get to know Louis Vosters, Vitaliy Tonkov and some of the other Wilvo team members and I know I will be welcomed with open arms. I truly believe the YZ450FM will be a great bike for my riding style and I am really motivated to show everyone what I can do in MXGP.

“I know the category is at such a high level, so I am fortunate to join a team with a lot of experience, success and motivation. I really want to learn and show progression, it’s what I work towards every year and with the experience of my teammates in MXGP, I know I will be able to gain a lot of knowledge and continue my development. I am so excited to get started now and jump on this amazing bike to prepare for the new season.”

Louis Vosters: “It’s really nice to have a young rider like Ben in our team especially because he grew up with the Yamaha Family and now, he is ready to step up into the MXGP Factory team.  We think Ben has a great potential and we are looking forward to work together in the coming years.”

Alexandre Kowalski: “We are really happy to keep Ben inside the Yamaha Family by moving him up to the Monster Energy Yamaha Factory MXGP team. It’s just rewards for Ben’s hard work and dedication to training and racing, and his commitment to Yamaha as well. At Yamaha it is our mission to develop riders and make it possible for them to achieve their dreams within the Yamaha family, and like Thibault Benistant stepping up from the MJC Yamaha Official EMX125 team to the Hutten Metaal Yamaha Official EMX250 team and then to the Monster Energy Yamaha Factory MX2 team, we are seeing Ben progress from the factory MX2 team to the factory MXGP team.

“We have to thank the Kemea team, Hans Corvers, Marnicq Bervoets and all of the guys at Monster Energy Yamaha Factory MX2, who have supported Ben since 2018 and have allowed him to achieve all that he has. It’s time for Ben to step up to the Yamaha Factory MXGP team where I know Louis Vosters, Vitaliy Tonkov are looking forward to working with him. Ben has been a long time Yamaha Factory rider in MX2, he is very close to us at Yamaha and it was his dream was to be a Yamaha Factory MXGP rider. Today his dream comes true.”