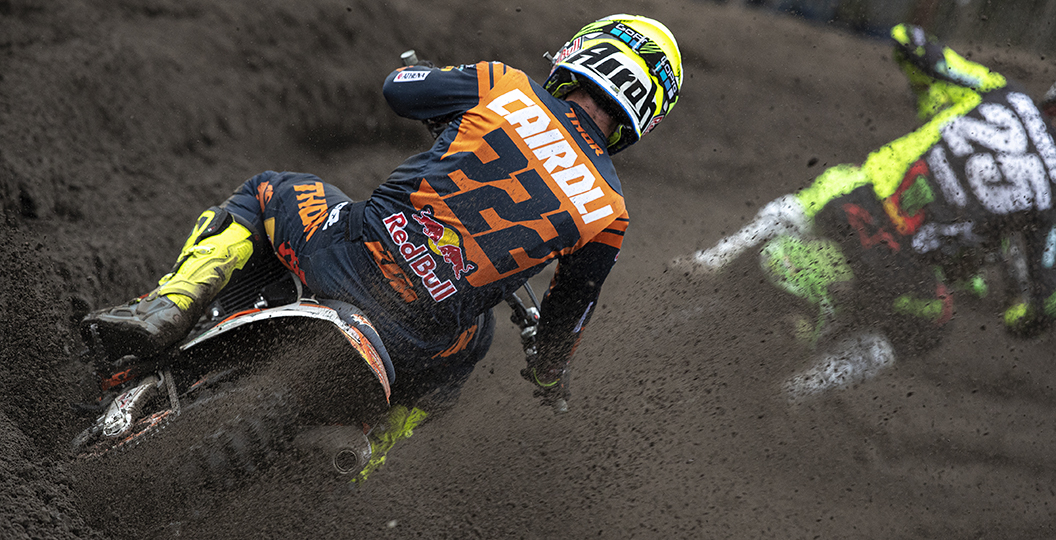 Huge news from the Grand Prix paddock, as Antonio Cairoli has re-signed with the Red Bull KTM Factory Racing squad. The new deal will run through the 2021 FIM Motocross World Championship. KTM’s official announcement is below.

Nine-times FIM Motocross World Champion Tony Cairoli will push for yet another title in Red Bull KTM Factory Racing colors in 2021 for what will be his eighteenth season in Grand Prix and the twelfth on a works KTM SX-F.

The 34-year old Sicilian and his crew, helmed by Claudio De Carli, united with the KTM Motorsport Department in 2010 and instantly delivered the factory’s first title in the premier class with the innovative KTM 350 SX-F. Cairoli remained undefeated until 2014 and then used the latest generation of the KTM 450 SX-F to secure his ninth crown in 2017. In total, he has given the manufacturer six championships in the last decade.

In terms of achievements, popularity, professionalism, longevity and enduring passion for motocross, Cairoli is the reference in MXGP and is still fiercely competitive at a time when the category has a vast depth of talent and speed. Cairoli will again form part of Red Bull KTM Factory Racing’s MXGP ‘Dream Team’ on KTM 450 SX-Fs alongside Jorge Prado and Jeffrey Herlings; boasting a combined number of fifteen championships.

Tony Cairoli: “I am really motivated for another good season next year so I’m really happy with the renewal of my riding contract. We’ll see what 2020 has in store but my goal is to aim for the championship and again in 2021. I’m very proud to have been so long with this factory team and I still want to write some pages in the history of KTM motocross.”

Pit Beirer (KTM Motorsports Director): “It says a lot for Tony as a rider and a person and an athlete that he is still so competitive when MXGP is at a top level. He could have walked into other teams when it was clear he wanted to continue in 2021 but it was important for us to extend his story with KTM and that couldn’t make us any happier. We have no doubt that he has the desire to go for a tenth title either in the season we will eventually have in 2020 or in 2021. It makes us all very proud to have a team with the caliber of Tony, Jeffrey and Jorge. I believe we can be the ones to beat again in MXGP with this strong trio but then also the whole team and technical crew with Claudio, Davide, Dirk and everybody who makes the Red Bull KTM Factory Racing team tick.”

Claudio de Carli (Red Bull KTM Factory Racing Team Manager): “Tony expressed his willingness to ride for at least another year and this obviously makes us happy and confirms his truly unique character and attitude for the sport. His final choice to remain with KTM gives us great satisfaction because it also confirms the good job we have been doing responding to his technical requests and the strong bond we have established over many years. Next season Tony will be in his twelfth year with KTM, and with my crew for the eighteenth. I think this says it all! We’re really proud of him and would like to give thanks to KTM for making this next chapter possible.”