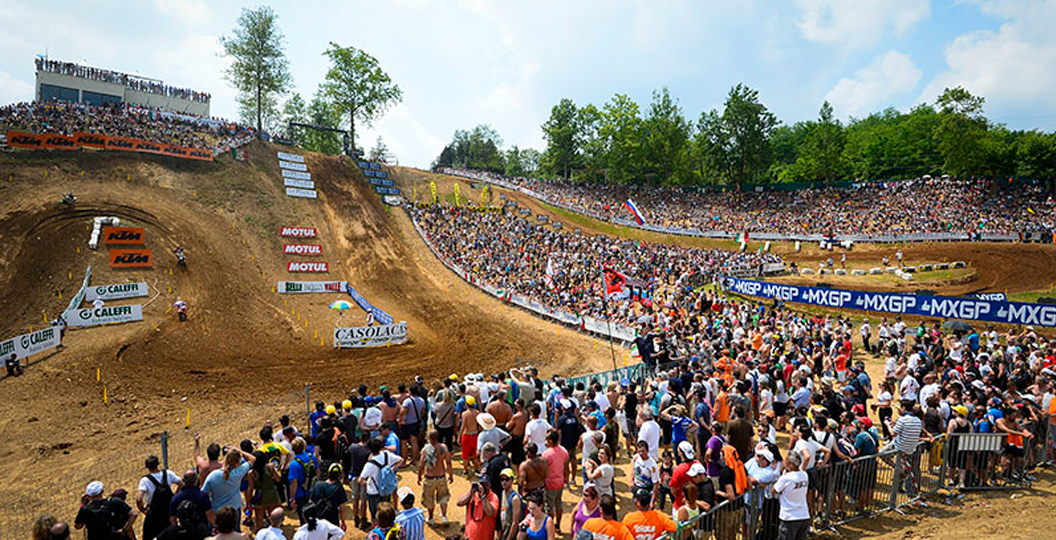 Italian fans redefine the word passion year after year, which is what is to be expected during MXGP of Italy which is set to take place at the recently upgraded Maggiora circuit this weekend.

Marking round ten of the FIM Motocross World Championship, last year’s MX2 winner Red Bull KTM Factory Racing’s Jeffrey Herlings has the chance to take a step towards yet another record this weekend, with only one rider in history to have won two Grand Prix’ at the circuit of Maggiora. That rider was Italian legend Alessandro Puzar, and now Dutch prodigy Herlings has the chance to tie with Puzar as the rider with the most Grand Prix victories in Maggiora.

Meanwhile in the MXGP class Red Bull KTM Factory Racing’s local legend Antonio Cairoli narrowly lost out to Monster Energy Kawasaki Racing Team’s Gautier Paulin last year in one of the most memorable battles in the history of our sport. This season the Frenchman, Paulin, is unfortunately still on the mend after breaking his collar bone and thumb during MXGP of The Netherlands, which has left MXGP of Italy in the palms of MXGP fan favorite Antonio Cairoli.

As for upgrades to the track and venue, the roads and streets leading into the circuit have been widened for better traffic flow and access, while new lighting systems have been put in place for better nighttime visibility. Alterations have been made to the track to make it a little more technically challenging. New obstacles have been introduced with the idea of providing a wider selection of lines and options to overtake while the spectating zones that surround the track have been developed to offer the public better visibility to improve their overall MXGP experience.

Known to his fans as MX Panda, Rockstar Energy Suzuki World’s Clement Desalle is looking like he has reached his peak in physical and mental condition over the last few rounds of MXGP as he continues to quietly chomp away at the lead of Italian favorite Antonio Cairoli.

With the Yamaha Factory Racing team being based in Italy, it’s almost like a home GP for their starJeremy Van Horebeek who has openly said he believes he will bag at least one MXGP overall win this year.

Meanwhile, with more than 376K likes on Facebook, Red Bull KTM Factory Racing’s Antonio Cairoli is one of Italy’s biggest stars and this weekend there is sure to be tens of thousands of raging ‘TC222’ fans rooting for their hero as he looks to take home the victory at his home Grand Prix.

All of Monster Energy Kawasaki Racing Team’s eggs are in the basket of Steven Frossard since their other super fast Frenchman Gautier Paulin is still out with injury. Frossard has been showing good form lately and after winning the qualifying race at MXGP of Trentino back in April, there is no counting the Frenchman out on a hilly Italian style circuit such as Maggiora.

Team HRC’s Evgeny Bobryshev nailed his best MXGP round finish this season at MXGP of France in Saint Jean d’Angely. The Russian came away with fifth overall which could be a good sign things are looking up.

Keeping those green, white and red Italian flags waving, the 2008 FIM Motocross World Champion David Philippaerts on board his DP19 Racing Yamaha and TM Ricci Racing’s Davide Guarneri will be keeping the fans pumped as both battle for their best MXGP finish of the season.

With Herlings being the hot favorite for the MX2 title, the next best challenger is more often than not CLS Kawasaki Monster Energy’s Arnaud Tonus. Tonus said at MXGP of France he is working towards being able to win against Herlings this year, which has got MX2 fans on their feet as they anxiously await this great duel.

Red Bull KTM Factory Racing’s Jordi Tixier is still trying to redeem himself after a rough start to the year. The Frenchman is steadily climbing the charts and is now fourth in the overall standings only six points shy of fellow Frenchman Romain Febvre.

Wilvo Nestaan Husqvarna Factory Racing’s Romain Febvre is hungry to hold on to that podium spot in the overall standings. While the challenge is going to be tough, Febvre has proved time and time again that he is a fighter and he never backs down.

Meanwhile Standing Construct KTM’s Valentin Guillod has been so close, yet so far, but has still proved the speed is there which leaves promise for the Swiss sensation to stand on the podium at least once before the season comes to a close.

While in other events, the organizers of MXGP of Italy have arranged a mountain bike show with ramps and a pump track as well as a giant air-bag trampoline which is 9 meters long for people to jump on.

On Friday 13 June, the charity Road2Recovery is hosting a charity dinner in the Balmone restaurant which is located onsite. The dinner will feature special guest, American legend Johnny O’mara who was one of the victors for team USA during the 1986 FIM Motocross of Nations, which took place at this very circuit in Maggiora. The dinner begins at 20:00, for more information click here.

Also the following night, Saturday 14 June, there will be a massive party with Virgin Radio which will be followed by Team Italy playing Football on the Maxi screen over in Brazil for the Football World Cup.