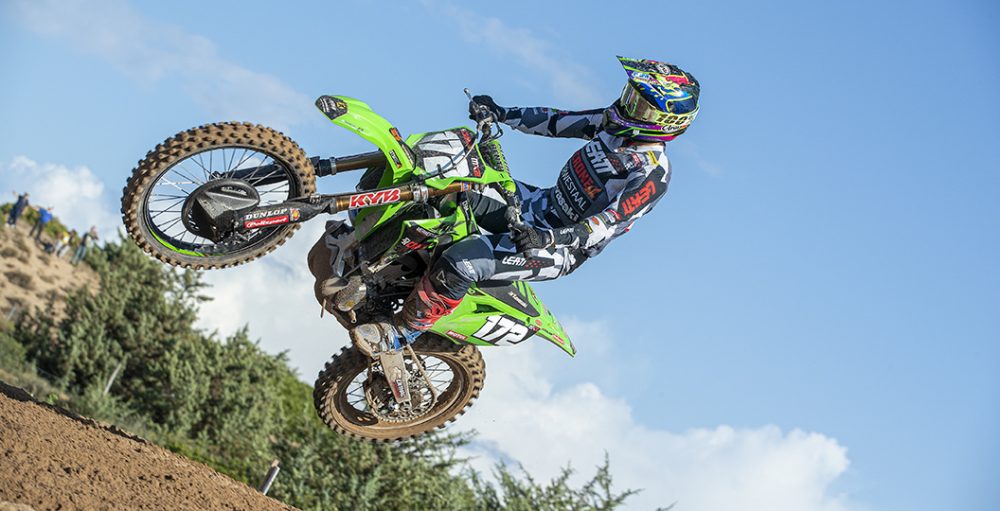 Mathys Boisrame has parted ways with the F&H Kawasaki MX2 Racing Team, as a chance to enter the premier division has arisen. Monster Energy Kawasaki Racing Team selected Boisrame to fill Ivo Monticelli’s seat for the remainder of the 2021 FIM Motocross World Championship, starting at this weekend’s Grand Prix of Germany. This was going to be his final season in the MX2 class anyway, as he is 23 years old now.

The most interesting point to consider here is the fact that Boisrame was already on Kawasaki’s shortlist for a factory seat in the 2022 FIM Motocross World Championship. Romain Febvre’s signed, of course, but the second spot has not been filled at the time of writing. One would think that this will only help his chances, seeing as he is going to already have some experience when the new term begins. Five other guys sit on Kawasaki’s shortlist.

Boisrame is currently tenth in the MX2 championship standings, after racing through a knee injury a lot. It is easy to forget that Boisrame’s season started in an incredible fashion, as he landed on the podium at the Grand Prix of Russia and was competitive at the Grand Prix of Great Britain as well. Five measly points separated him from the red plate at that point! Things fell apart after that, so there is not much to gain from ending the season on a 250F.

Firmly established as a frontrunner and regular podium visitor in MX2 on his F&H KX250, Frenchman Mathys Boisrame has been selected to deputise for the injured Ivo Monticelli on the MX Esca Kawasaki KX450-SR.

Recently selected as part of a strong French team for the 2021 MXoN, Boisrame has made no secret of the fact that – like many riders in the MX2 class – his core ambition is take on the ultimate motocross challenge of MXGP.

Welcomed to the MX Esca awning by Monticelli’s pit crew and the rest of the experienced team, Boisrame’s first task will be to familiarise himself with his new mount with scheduled practice and familiarisation briefings ahead of the remaining MXGP rounds.

Although understandably sad to see Mathys depart without completing the full 2021 season, team manager of his current F&H squad, Nathalie Fase, has given the racing class step up her full support saying: “We had some great times working with MB172. Mathys is a fast rider with great future potential and a superb team player. F&H is proud to have played part in his meteoric rise to the ranks of MXGP riders and we wish him well for his Kawasaki future.”

Despite a mid-season knee injury from which he has now recovered, Boisrame has shown himself to be both a fast and tactical rider. His three year rise to prominence in the F&H team is something that appeals to MX Esca team manager, Vincent Bereni: “MX Esca is happy to give Mathys the opportunity to ride the last MXGP events on the KX450-SR machine. F&H has put a lot of effort into Mathys in the past two years. Letting him take this opportunity shows just how professional and how dedicated to the sport the F&H team is and I’d like to thank them for that. From our end, we never like to rush anything, the step from MX2 to MXGP bikes is important that is why we decided to first get Mathys comfortable with the bike, giving the team the time to be also ready as we are currently racing every weekend. This way he will be able to perform at his best. We think Mathys can get some good experience of the MXGP class and show his potential for the future.”

Mathys himself concluded: “First of all I want to sincerely thank the F&H team and especially Nathalie and Harry Fase, who have done a lot for me during these past two years. I will remain eternally grateful to them. Thanks also to Marc De Reuver, a demanding but very inspiring coach! Following my knee injury, I lost ground in the championship and a top 10 does not correspond to our respective ambitions, so with the idea of preparing my move to 450, they were immediately enthusiastic and cooperative with Kawasaki Motor Europe to facilitate this transition, again demonstrating the sportsmanship that drives them. Finally, I am honoured that the KRT team run by Thierry Suzzoni and Vince Bereni of MX Esca have thought of me as a credible option in fill in for Ivo for the end of the season. There is no better package to start in MXGP, I am in heaven.”