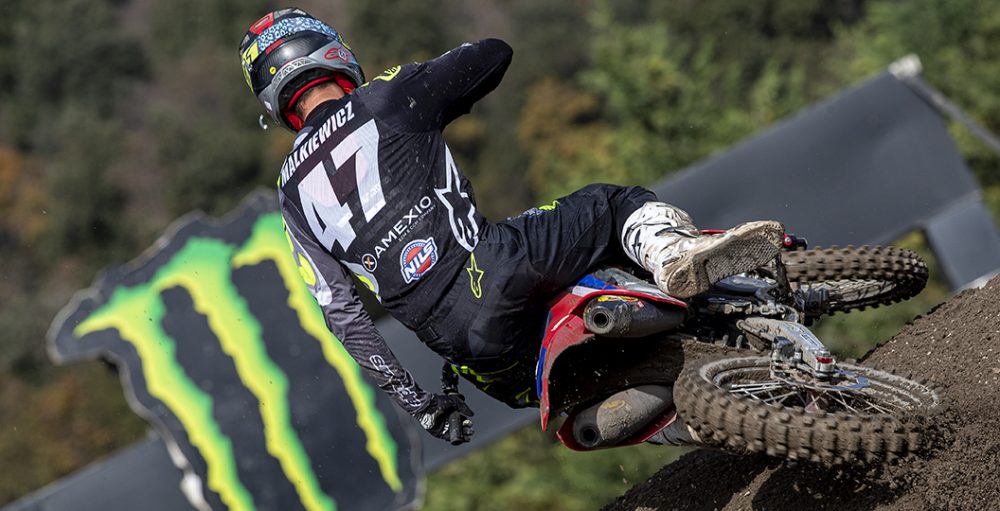 An exciting development ahead of the second round of the EMX250 at Oss, in The Netherlands, on Saturday. Hutten Metaal Yamaha has signed Bailey Malkiewicz as a fill-in rider, whilst Jeremy Sydow recovers from the injuries that he sustained in the off-season. Malkiewicz is expected to race three more rounds after this weekend; Lommel, Latvia and Finland.

After a positive winter period where he showed signs of great promise aboard his GYTR kitted YZ250F, Sydow was, unfortunately, unable to start his 2021 EMX250 campaign in Matterley Basin, England, on June 27 due to an injury sustained at a Dutch Motocross Championship race in Arnhem, The Netherlands, one-week prior. The 21-year-old German damaged his pancreas in a minor crash and, after spending several days in the hospital under the watchful eye of medical professionals, a decision to operate was made.

Sydow underwent a successful operation on Tuesday, June 23, at Isala Zwolle Hospital in The Netherlands. The injury is expected to take at least 10 weeks to heal – therefore Yamaha has called upon Malkiewicz to fill the German’s seat for the next four rounds of the EMX250 Championship.

Malkiewicz is a 19-year-old Australian best known for his success at the 2018 Junior Motocross World Championship, where he won the Junior 125cc world title aboard a Yamaha YZ125. He also contested the 2020 FIM MX2 World Championship and finished fourteenth in the final classification, despite sustaining a torn ACL in his right knee.

Looking forward to making a return to Europe, Malkiewicz has recovered from the ACL reconstruction he had earlier this year and is relishing the chance to race the highly competitive European Championship with a GYTR-kitted YZ250F as a substitute for Sydow. The youngster landed in Amsterdam, The Netherlands, on Wednesday July 14 and will make his EMX250 debut at the MXGP of The Netherlands in Oss this weekend, with the second round of the 2021 EMX250 Championship set to take place on Saturday.

Bailey Malkiewicz: “I’m excited to reunite with Yamaha as I had great success with them in 2018 as 125 Junior World Champion. When preparing for my knee surgery, my personal team and I planned for this return. It’s reassuring that the Hutten Metaal Yamaha Official EMX250 team have demonstrated their professionalism in developing the right strategy for my return to ensure it is safe and can yield results at the right time. Mentally, I’m stronger than ever before. I’d like to thank everyone that made this happen especially Thorsten, the team, my father Steve, and my manager. There was so much work to do in a short period. Without them, this opportunity would not have come together.”

Thorsten Lentink: “Jeremy had a very good off-season where he worked really hard to be at the top of his game for the EMX250 season this year. He was looking good, and we were expecting to celebrate some great achievements, so it is very unfortunate that he has sustained this injury. While we continue to focus on helping Jeremy return to full fitness, we also want to see the GYTR-kitted YZ250F represented at a high level. So, with that in mind, I am very happy we were able to reach a deal with Bailey Malkiewicz. Bailey is a talented young rider that caught our attention last year. He is a rider that has a lot of potential. Since he has already had success with Yamaha and the Yamaha Family in the past, as the winner of the Junior World Championship on a YZ125, he was the obvious choice to step in for Jeremy. We look forward to working with Bailey, and to give him the chance to return to Europe where he can show his potential on the world stage.”