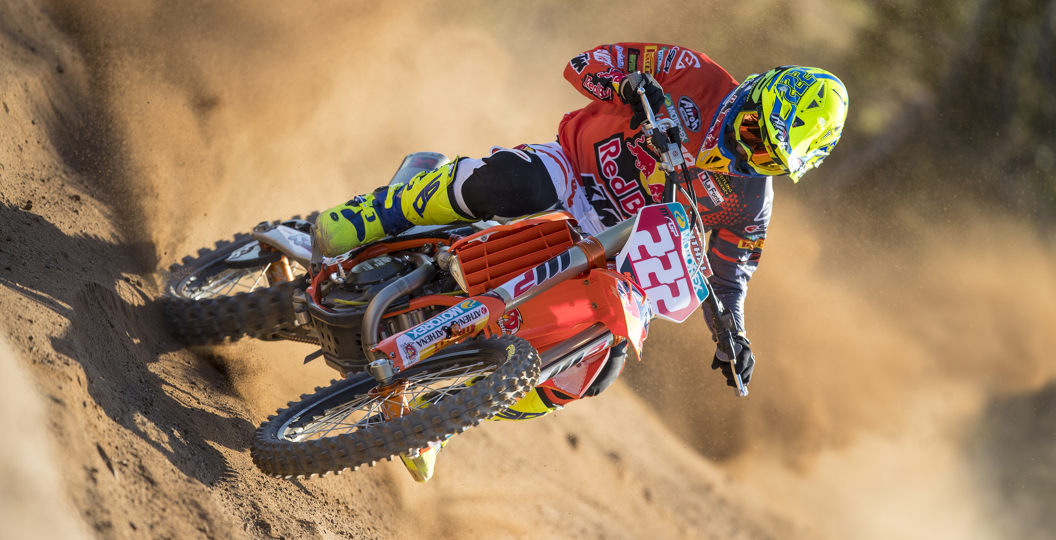 #222 adds another 2! Red Bull KTM Factory Racing are thrilled and proud to announce that reigning MXGP number one and nine times FIM Motocross World Champion Antonio Cairoli will remain part of the team for another two years and through the 2019 and 2020 Grand Prix seasons.

The 32 year old Sicilian renewed his contract on Thursday in Rome in the presence of Team Manager Claudio De Carli and KTM Motorsports Director Pit Beirer. The agreement means that Cairoli – who gave the factory their first title in the premier class of the FIM series with the KTM 350 SX-F in 2010 and delivered the KTM 450 SX-F’s first MXGP crown in 2017 – will register eleven years with the brand.

The 2018 contest begins next weekend with the first round of nineteen taking place at Neuquen for the Grand Prix of Patagonia Argentina. The South American fixture will mark the beginning of Cairoli’s fifteenth term as a full-time GP rider and his ninth in Red Bull KTM colors. In a remarkable career that boasts nine titles (seven in the premier class since 2009, six with SX-F technology), 213 GP appearances, 83 career wins and 145 podiums (with 163 moto victories) Cairoli is still the reference for the sport as he bids for a record-equaling tenth championship and his first viable ‘defense’ of the No.1 status with the KTM 450 SX-F.

“I’m really happy to announce this because we already made history in 2010 with the KTM 350 SX-F against the 450s and succeeded with that challenge. I feel a part of KTM because of that success and since then the company has grown a lot,” commented Cairoli. “I put in a lot of effort to bring titles and I feel very proud to be part of the company. They invest a lot and do a lot of work in development and you see the result because it is the top off-road manufacturer in the world. I’m happy to continue and to do another two years and to try for more titles. I’m fully motivated for the upcoming seasons.”

“Around two years ago people were already saying that Tony was getting too old to stay at the top and I took that moment to declare that we had full trust in his skills and capabilities. He had two tough seasons but it was amazing how he bounced back in 2017 and showed that we were absolutely right,” said Pit Beirer. “It made me happy and very proud that he wanted to continue and he wants to keep pushing. I believe Tony has found the right balance in his life – personally and professionally – to keep racing and wanting to achieve. He is very passionate about it and this is why he continues to be so strong. I’m only too happy to make this strong commitment to Tony and very pleased that our MXGP story will go on. I also want to thank and pay credit to Claudio De Carli and his role. He has had a big say in the Cairoli-KTM success over the years and long may it last.”

Red Bull KTM Factory Racing head to Argentina in the coming days as world champions in both categories of the FIM Motocross World Championship for the sixth time this decade.