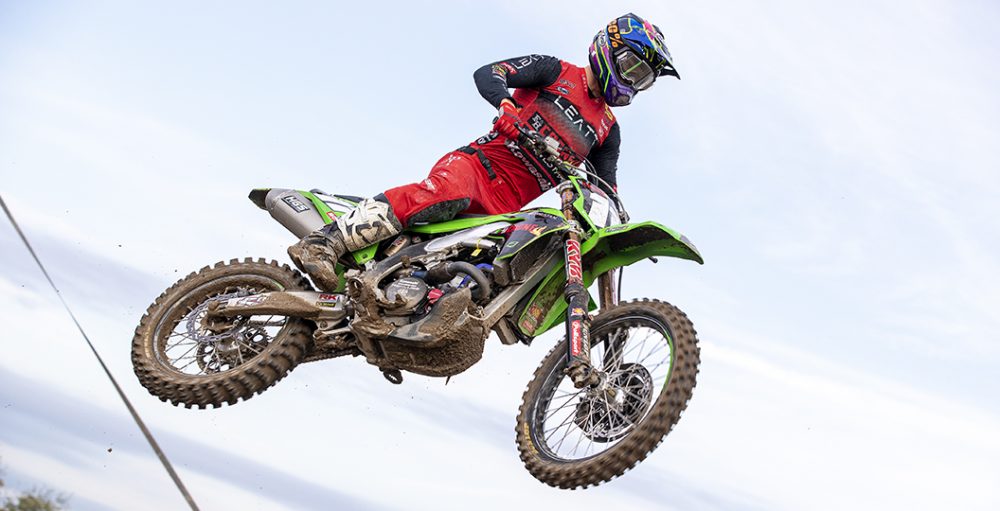 It already became apparent that Mikkel Haarup would be riding for Steve Dixon when Infront Moto Racing released a list of officially-approved teams before Christmas. Now, however, the deal’s been made official with an announcement from the British-based effort. Haarup has signed a two-year deal and not mentioned in the press release is the fact that Courtney Duncan has signed a two-year extension as well. Taylor Hammal will return to fulfil the final year of his contract.

Haarup made his professional debut with Rockstar Energy Husqvarna Factory Racing, but has spent the last two seasons with the F&H Kawasaki Racing Team. Haarup secured a podium finish in his first Grand Prix with F&H – coincidentally that was at the event that Dixon promotes – but has struggled with injuries since then. Eleventh was his final ranking in the 2021 FIM Motocross World Championship. Haarup has no plans to race in the ACU British Championship.

DRT enters its eighth year with Kawasaki, having delivered three World WMX championships and a finish of third overall in MX2 [with Max Anstie in 2015]. 2022 will see the team look to add another WMX championship, as well as welcome 20-year-old Mikkel Haarup to the MX2 side of the effort. Haarup has signed a two-year deal with Kawasaki Europe.

Haarup will stay with Kawasaki but move to the DRT Kawasaki team in a bid to find glory. The English-based team are no strangers to taking riders to that next step of an MXGP win. We would also like to take this opportunity to wish all our sponsors and supporters a Happy New Year, and to thank them for all their continued support.

Steve Dixon (Team Owner): “This is my thirty-third year as a team owner, and every year is a new challenge. This year is no exception. We are super happy to welcome Mikkel to the team. It’s going to be a very interesting project, as he still has three years left in the MX2 class. To think that he has already been on the podium and had some good rides makes me very excited to see if I can bring the best out of him. There is absolutely no reason why he cannot be pushing at the front each week! I have spent some time with Mikkel; I really like his attitude and determination and professionalism. He is a joy to work with!”

Mikkel Haarup: “I’m very happy to finally be able to announce that I have signed with DRT Kawasaki. It’s great to be part of a team with such experience that shares my will to learn and improve together. I have a great feeling with the team already, and I am very much looking forward to two successful years with Kawasaki and Dixon Racing Team.”