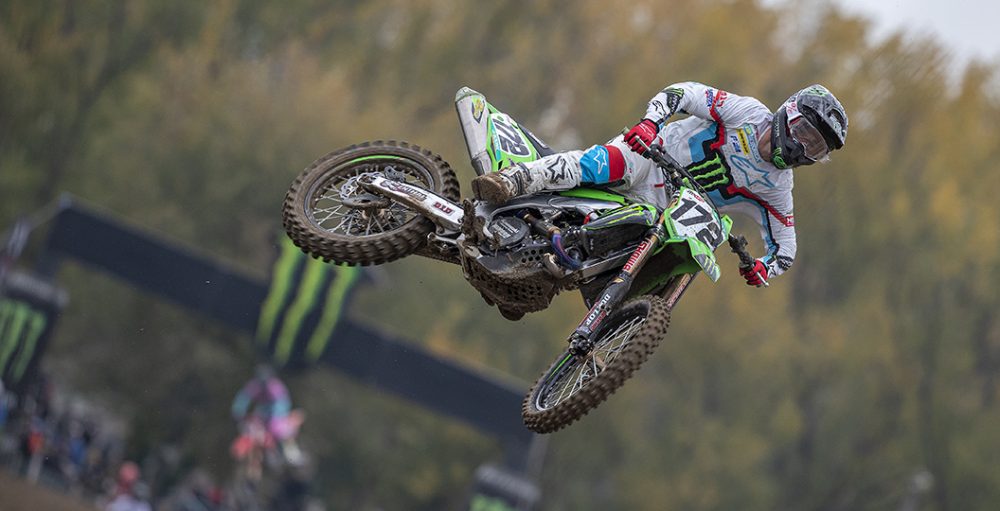 It was well documented that Mathys Boisrame was a favourite to claim the second seat on Kawasaki’s factory MXGP team, but that ultimately went to Ben Watson. Hours after Kawasaki broke the Watson news, Boisrame’s plans for his first full season in the premier division were revealed. An official statement from his team is below. Truthfully, this prompts more questions than answers.

There is no mention of Boisrame competing in the 2022 FIM Motocross World Championship, but perhaps that is a given? It is still bizarre that Grands Prix are not even referenced. Team 2B BOS CBO Kawasaki has not done a full Grand Prix season before, so one would think it’s a noteworthy point. A head-scratching point is that it sounds as though Kawasaki were very involved in finding him a solution, because of his “loyalty” that is appreciated.

Boisrame has raced in ‘green’ for two seasons, the duration of his contract with F&H, meaning that he has merely fulfilled one deal with Kawasaki and arguably underdelivered in that time. After a rather short period with the manufacturer, it’s just odd that “loyalty” is being mentioned over and over. The tone of this announcement would lead one to think that Boisrame is going to be a fill-in rider on KRT whenever someone gets injured.

MX Vice will attempt to gather answers to these points, so stay tuned for more. In the meantime, however, here is the official announcement.

After racing the last five MXGPs on the KRT Kawasaki, Mathys was able to show his potential on the 450, posting top-ten results in all time practice sessions and scoring four top-ten results. His performances have placed him in competition with Ben Watson for the second KRT seat alongside Romain Febvre. Unfortunately for Mathys, the English profile won it by very little.

Kawasaki and Mathys found an arrangement, thanks to the support of Hervé Broyer’s Team2B/BOS/CBO group allowing Mathys to continue the adventure in 450. Mathys loyalty to Kawasaki is true and sincere, and appreciated by the Japanese executives.

Mathys will start in the next few weeks a heavy testing and development program near Toulouse and then to Sardinia throughout the month of January where he will join Ben Watson and many MXGP riders in preparation.