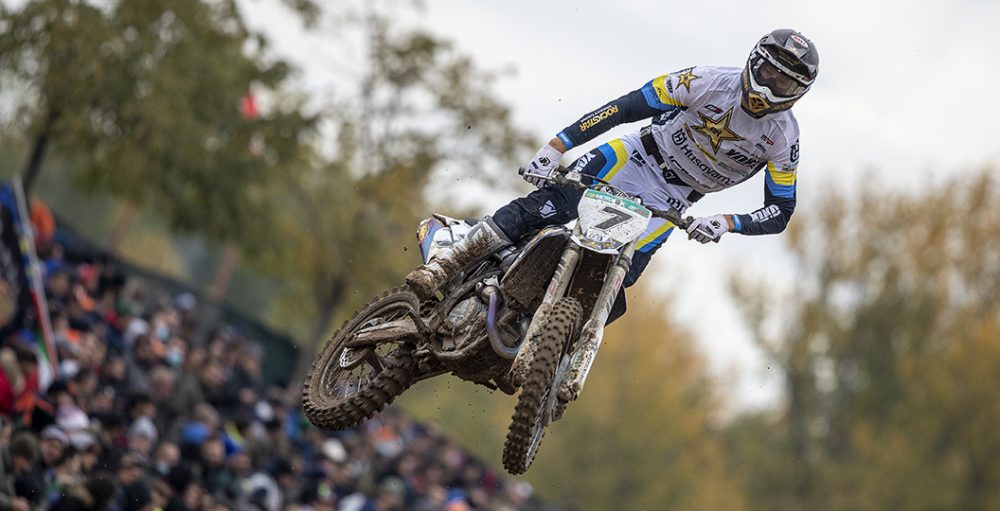 Calvin Vlaanderen and Arminas Jasikonis will represent the Gebben Van Venrooy Yamaha team when the 2022 FIM Motocross World Championship starts in late February. Vlaanderen, who has raced for the team for the past two seasons, will return on a one-year deal and be joined by a new teammate in the form of Jasikonis, who’s also  on a one-year contract. Gebben Van Venrooy will switch from a three-rider team to a two-rider effort now, which means that Brent Van Doninck is in desperate need of a home.

Gebben Van Venrooy appear to be making steps forward away from the races; there are now practice mechanics and the team has a base in Lommel, Belgium. Those are obviously extremely important things for a team that is hoping to compete against the factory squads. Vlaanderen was chasing a factory seat with Kawasaki, of course, and Jasikonis lost his factory seat at Husqvarna after three seasons, so both riders have their eyes on those elite spots.

After a long and exciting 2021 MXGP World Championship, the Gebben Van Venrooy Yamaha team are quickly turning their attentions to the 2022 season. The season is scheduled to get underway at Matterley Basin in the UK on February 19 and 20. It means a short turnaround and less of a winter preparation than normal, but the team are excited to get the new season underway.

Jasikonis has been a full factory rider, representing Husqvarna in the MXGP paddock for the past three years and the team are delighted to welcome him to the Yamaha family and are looking forward to the 24-year-old reaching his full potential.

Calvin Vlaanderen: “I’m very happy to be continuing my relationship with Gebben Van Venrooy Racing for the 2022 season. We have grown a lot as a team in the last two seasons and I expect nothing less for next season. Although we are a small team, we work really well together and I believe we have the full package to do well. My plan is to put in a solid off-season this winter preparing with the team and to come out next year fighting for podiums.”

Arminas Jasikonis: “After a long time of waiting, we can come out with the official news. It’s been a stressful time because all is so late, but I’m really grateful to be riding for this team. I’m super motivated for next year and it’s a really warm feeling that the team is so motivated and working so much with everything. This gives me confidence to say that we will do great things next year. I’ve rode the Yamaha and I have not been riding since the last round, but the feeling was really nice. I rode straight away at a sandy and bumpy track, but the bike felt really stable and really listened to me.”

Klaas Hattem (Gebben Van Venrooy Racing Team Manager): “I am happy and delighted with the rider line-up for the 2022 MXGP season. Calvin Vlaanderen has extended his contract to enter his third season with the Gebben Van Venrooy Yamaha team and new to the team is Arminas Jasikonis. Despite their young age, both riders already have the necessary experience on the 450F bike. I am very confident that we will surprise with the current package in 2022 and look forward to the season ahead.”