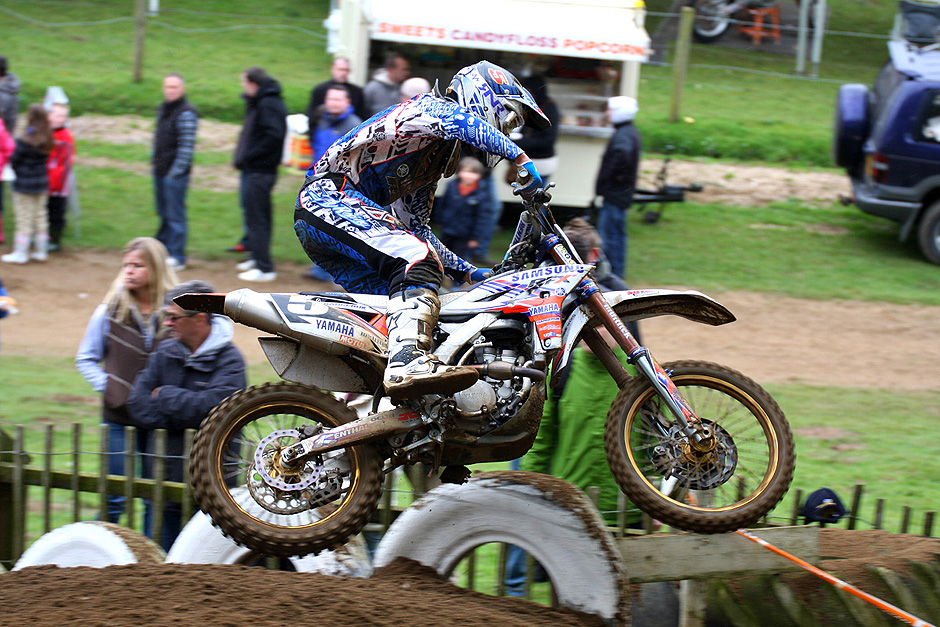 After typical English summertime weather most had expected round 3 of the British motocross championship to be a mudfest, but with threatening skies and winter like temperatures the historic sandy circuit of Lyng was in prime condition! The temperature was set to soar as the qualification times were posted and both Yamaha’s Samsung RFX MX2 riders where inside the top 10 once again.

The first race saw both the Samsung RFX riders hitting the front just behind eventual race winner Elliott Bank-Browne (EBB). Irwin managed to pass team mate Lenoir and set after EBB. For Lenoir it was his first visit to the South East track and a bit of a learning curve pitted against riders who had raced here many times before, but the French ace kept the Samsung RFX Yamaha upright on the demanding natural terrain holding second spot for over half the race to bring it home eventually in 4th place not far adrift of Irwin who despite his efforts could do nothing about lining the leader up to make the pass for that illusive first Maxxis win aboard the Samsung RFX 250f Yamaha.

Race 2 looked to be another great start as again both the Yamaha’s in the Samsung RFX squad had got off the concrete launch pad well their Pirelli tyres hooking up well putting both riders inside the top 10 as they hit the first turn. Irwin had the better of his Samsung RFX team mate this time out and came round to complete lap 1 in 3rd tucked in behind first race winner EBB with GP rider Pocock out front. Lenoir had managed to climb to 6th as they came past the timming wagon and had the 250f Yamaha flat out trying to make up ground. Irwin forced EBB into an error and took over the second spot once again responding to every move leader Pocock made, but again that win wasn’t to be as he crossed the line for the second time in second place but now in with a great shot of the overall win on the day. Lenoir had worked hard with poor vision from the damp sandy conditions but his Rip n Roll cartridge googles kept him in the hunt and he moved up the leaderboard to cross the line in a very comfortable 4th, again.

Into the final race of the day for the MX2 riders and it looked good for at least one of the Samsung RFX boys, if not both to finish on the podium. Lenoir hooked his Pirelli tyre up and bolted off into the lead with an increadable holeshot with race 1 winner EBB in hot pursuit, the Frenchman rode exceptionally well to hold the lead untill the 3rd lap and then eventually dropped to 3rd on lap 7 of 11 but crossed the line with only a 3 second margin to reclaiming the runner up position. Irwin’s race hadn’t gone quite to plan after another good start a collision with another rider while trying to make an aggressive pass had left the Samsung RFX pilot on the ground and down the leaderboard. Picking himself back up and putting on a great charge on the by now hidiously rough circuit it was to be a battle of will for the young Irishman to try to put in a finish to salvage what could of been an overall victory. Managing to climb back into 5th place earnt him 3rd overall for the day just ousting team mate Lenoir back to 4th. Surely it will be only a matter of time now before we see the Samsung pair getting race wins and the overall victory that they both so deserve.

MX1 Samsung RFX rider Jake Shipton set a 2.11 lap in qualification to put him in 27th just needing to find a mere 2 seconds a lap to be in side the top 20 and this now doubt will come soon once the youngster is back to being race fit after his pre-season mishaps.

Race 1 saw the mighty 450f Samsung RFX Yamaha come round to complete lap 1 in 25th and with the Samsung RFX setup performing well he was able to push up to just outside the point scoring 20th place before his stamina started to fade halting any further forward momentum, crossing the line in 22nd.

Race 2 got underway and after having had some light rain the track the riders in the thick of it were imparred by poor visibility and this was hammpering any chance for Shipton to recover from a very poor start, only managing to climb from near last on lap 1 to finish 33rd.

Final race saw a better start but a problem on the second lap saw Shiptons race was over as he retired on lap 3, hoping to come back stronger for round 4 at Milton Malsor in a few weeks time with a track more to his suiting.