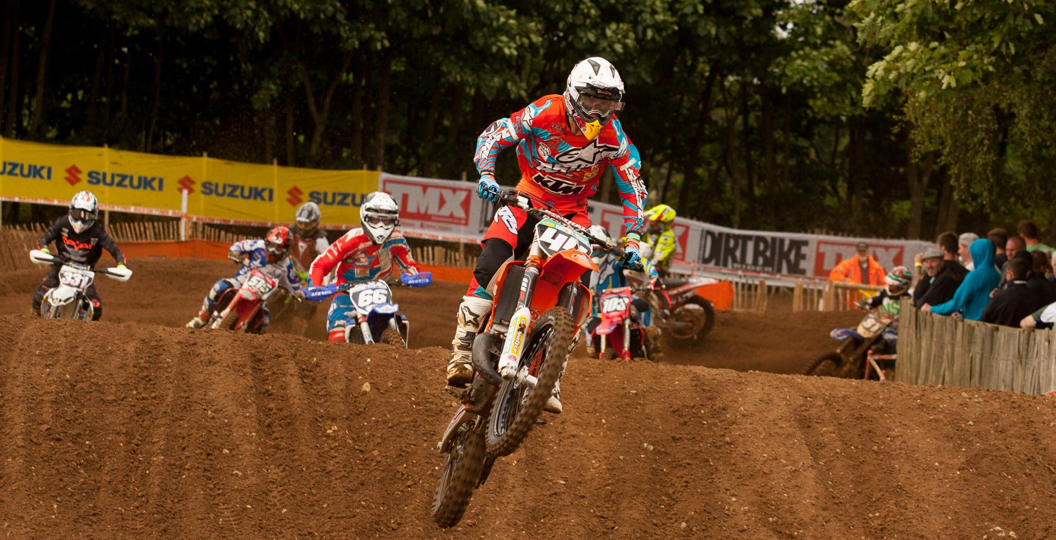 The MXY2 class has been a welcome addition to the Maxxis British Championship in recent years and, nowadays, is arguably looked at as much more than just a support class. The riders aren’t present at every round, but they did complete round three of five this past weekend at Blaxhall.

Through the first two rounds Ollie Osmaston and Jay Hague have established themselves as the main two contenders for the title, but neither rider made it onto the podium this past weekend. The addition of wildcard Conrad Mewse contributed to this, of course, but it just seemed as though the class was very well matched. The series regulars were, at least.

One of the most intriguing things to observe was how Mewse fared off the start, as his factory 125 would be going up against some well looked after 250F’s. He didn’t fare so well in moto one, as he started near enough last whilst Hague and Osmaston were mid-pack. This opened the door for some new faces to lead the way, like Robert Yates. Yates shot out to the early lead and led for a long time; seven laps to be exact. However, Dowson (who started fifth) and Hague closed right onto his rear wheel just after the halfway stage.

Hague crashed during this battle and, although he eventually got back on his bike and rolled around, he didn’t line up for the following two races. This left Dowson to battle it out with Yates and he did, eventually taking the lead with just a couple of laps remaining. Osmaston also closed up on Robert – the pair came together mid-air on the final lap (check our social media for the video), but Ollie eventually prevailed. He was just over a second adrift of Dowson, who took his first MXY2 moto win, at the finish. Mewse amazingly climbed up to fourth and, had he had a couple more laps, probably would have won. It was a sign of things to come…

The second MXY2 moto was cut short, due to a red flag. There were more surprises in store though! Mewse had a much better start this time around, inside of the top ten, and quickly moved into the lead, passing Robbie Dowson to take that position. Osmaston, who had a chance to make up a lot of points in the standings, crashed early on in this one and was buried just outside of the points. Seeing as the race was stopped at nine minutes, he didn’t have enough time to move back into the top twenty. Mewse, Dowson and Wilkie were the top three when the red flag was thrown.

Mewse took the holeshot in the final moto, incredibly. The race for the win was over at that point. Osmaston started third this time around and quickly moved into second, passing Josh Coleman, but had nothing for Conrad. Truthfully that didn’t matter though, as the points would still help him massively in the standings. Robbie Dowson had another strong ride in this one, stalking Osmaston for much of the race, but he eventually ended up one second behind the series leader in third. Had he managed to take second, he would have ended up with the overall on the day.

Instead that went to Mewse, who was joined on the box by Dowson and Robert Yates (who had a pair of fifths to go with his third from moto one. Osmaston (fifth overall) now has a thirty-two-point lead in the series over Hague. The battle for second could really heat up in the coming weeks, as there are five points separating Henry Williams (fifth in the championship) from Jay. Yates and Dowson are sandwiched between those two in third and fourth, respectively.