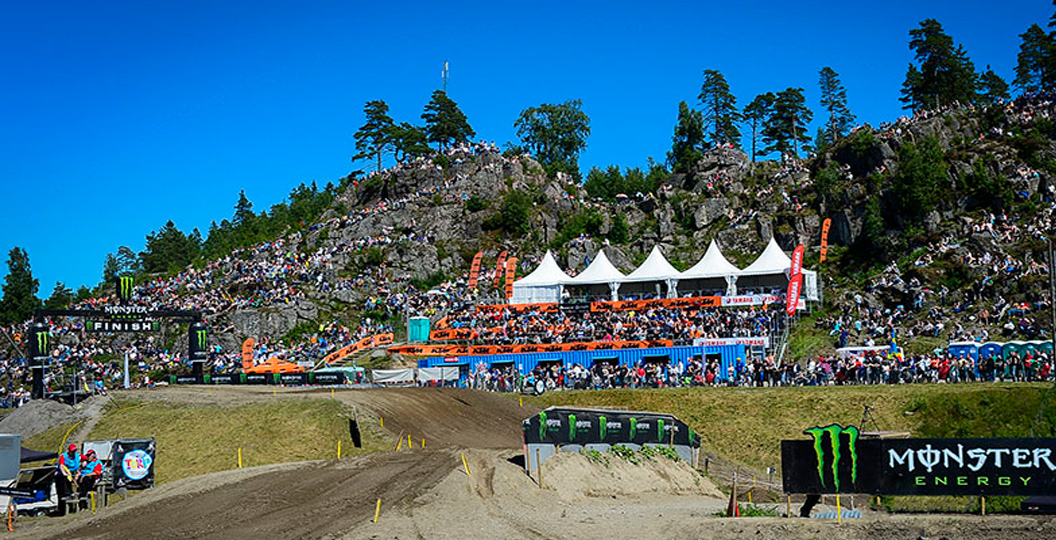 MXGP swoops in on Sweden

FUNCHAL (Portugal), 02 July 2014 – A solid fixture on the FIM Motocross World Championshipcalendar, this season’s round twelve is all set to take place in Uddevalla, Sweden. This weekend will mark the fourteenth consecutive year Uddevalla has hosted a round of the motocross world championship and while the circuit itself is familiar to many, a handful of changes in the terms of layout and composition are to be expected.

With Sweden being the home of the most successful veteran motocrossers in history, Mats Nilsson, who has a whopping eleven race wins under his belt and three VMX World Cup titles, Uddevalla is the perfect place to host the one and only round of the 2014 FIM Veteran Motocross World Cup. While Nilsson will be aiming to defend his crown and add another notch to his belt, he’s going to be up against some stiff competition with the likes of Spanish legend Javi Garcia Vico, who openly admits he lines up for nothing less than first, as well as the 2012 FIM VMX World Champion, all the way from New Zealand, Darryll King. Both King and Garcia Vico have been big names in the FIM Motocross World Championship for many years and it’s always a pleasure for the fans to see even after all this time, the passion to race is still there and so are those skills that once blew everyone away.

Rockstar Energy Suzuki World’s Clement Desalle is quietly gnawing away at the lead of the reining world champ Antonio Cairoli with a mare twenty-five points separating the two. Twenty-five points is the difference of one good race versus one bad race, and while nine times out of ten, such a scenario is unlikely, we have come to learn that in motocross, anything can happen.

Red Bull KTM Factory Racing’s Antonio Cairoli, at this very circuit in Uddevalla, has felt the full effect of the statement ‘anything can happen’. In an odd turn of events back in 2012, Tony didn’t score a single point in both races. Funnily enough, on that same weekend Desalle went 1 – 1 for a perfect score. Luckily for Tony, he managed to put that weekend, which could be named the worst weekend of his career, behind him when he bounced back with a double victory last year.

It’s coming. Yamaha Factory Racing’s Jeremy Van Horebeek has only five more shots at standing top of the box, as does fellow Belgian Rockstar Energy Suzuki World’s Kevin Strijbos. Strijbos put in a solid display of speed and endurance last weekend at the local Belgian Championship defeating his countryman Van Horebeek as well as the king of MX2 Jeffrey Herlings, for the victory and a smidge of extra confidence coming into this weekend.

Meanwhile, no one will be underestimating the race strength of Team HRC’s Max Nagl who bounced back in awe-inspiring fashion at the last round of MXGP when he won race one despite having eight weeks off the bike. The German inspiration will be looking put himself and Honda back on the box again this weekend as he fights for a place on a factory team for season 2015.

Surprise of the weekend will be the return of last year’s star of the MX2 ranks, Australian Dean Ferris. Ferris will be standing in for Tyla Rattray at Red Bull IceOne Husqvarna Factory Racing’s, which should raise some eyebrows as he has previously gone on the record to say he prefers the MXGP bikes to the smaller MX2 machines.

“Domination means everything” were the words that were posted on Red Bull KTM Factory Racing’s Jeffrey Herlings social media accounts this week. The photo accompanying the caption was of his forty-two red plates all lined up in rows of seven. The nineteen year old Dutch sensation will go into this round as the hot favorite to expand that count to forty-three.

Meanwhile teammate of ‘The Bullet’, Red Bull KTM Factory Racing’s Jordi Tixier has finally taken over third in the championship standings and with CLS Kawasaki Monster Energy’s Arnaud Tonus out with a broken shoulder, the Frenchman should be on track to take back that number two spot he is desperately trying to defend.

Honda’s hottest prospect, Tim Gajser onboard a Honda Gariboldi supported CRF250R appeared to have stepped it up at the last round of MX2 in Teutschenthal. The Slovenian is really starting to hook gears which has many excited for what his future may bring.

The super Swiss flying the flag for Standing Construct KTM, Valentin Guillod is still on the hunt for his first ever MX2 podium overall. The talented youngster has proved his speed is there with two qualifying race pole positions already under his belt, yet the result on race day has not yet come to pass. Maybe this weekend we will see the likeable Swiss, with his countryman out of the running, fly the flag high for Switzerland.

Meanhile young Russian Aleksandr Tonkov has been struggling to keep his Wilvo Nestaan Husqvarna Factory Racing FC250 rubber side down this season, he did manage to wrap up fifth overall in Teutschenthal which could be a sign better results are on the way.