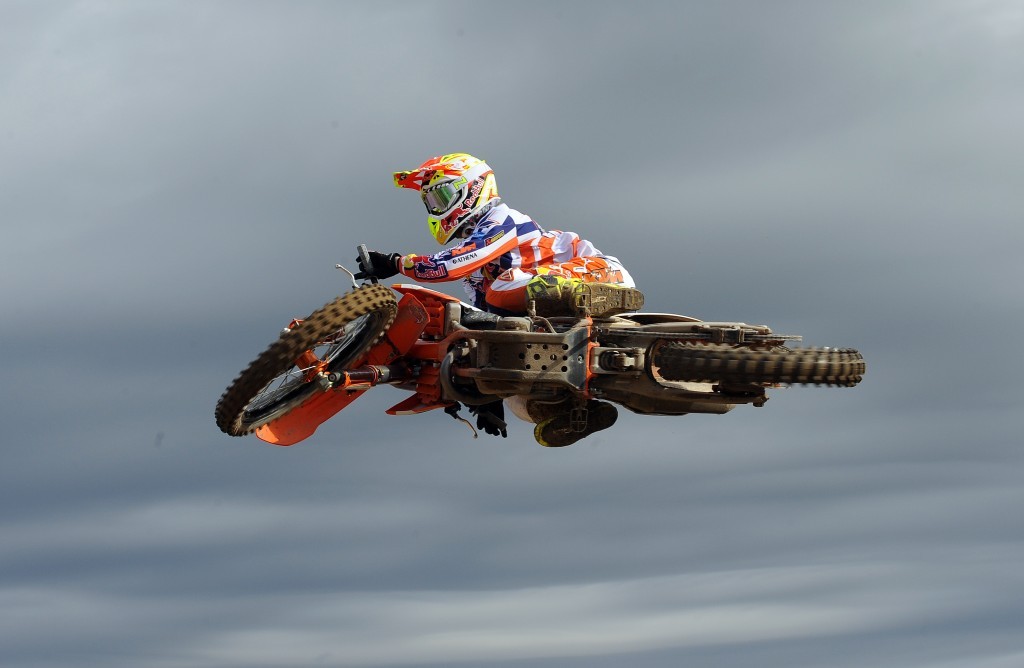 Can anyone beat Antonio Cairoli in a championship? That is the question that every fan, team and even the riders are trying to answer.

Cairoli has the lot; speed, consistency, intelligence, race craft, and the mental strength to deal with pressure.

That is a tough combination to beat. And quite frankly Cairoli even seems to have some speed in reserve if he is challenged. But the challengers are queing up to dethrone the champ.

Gautier Paulin came the closest last season but his bad races were already leaving him a mountain to climb in the points even after he did beat Cairoli. Getting a a fifth or a sixth isn’t going to cut it when Cairoli is rarely outside the top three and and usually winning.

But Paulin has the ability to do it and is making step by step progress, the final step though is the hardest. But that is the one that he is going for this year.

Paulin has a new teammate for 2014. The injury prone Steven Frossard has another chance in a factory team and if he can stay healthy could be a threat to Cairoli in certain races.

Frossard of course is maybe the last guy to really threaten Cairoli in terms of consistent speed but after two years of injury it is probably not realistic to expect him to be a title challenger. Getting through a season unscathed would be a good building block for Frossard to launch a title challenge in 2015.

Talking of injuries team both team Suzuki’s riders have spent most of the off-season recovering, Desalle in particualar has been off the bike since the  Nations. But last week in France both riders were on the track and Desalle took the win.

Desalle, like Paulin, is searching for the last piece of the puzzle to beat Cairoli. He can beat him in races but having that consistency throughout the season is something Desalle has not quite mastered. At the end of 2013 Desalle probably found his best form for a couple of years, but just how race fit he is coming into the season remains a question mark.

Kevin Strijbos had another good season last year but whether he can improve again is hard to know. Strijbos is nearing 30 now and despite all his talent just seems to lack a ruthless streak that is needed to be a champion. Strijbos rides at his best when he is angry but is generally a laid back charachter, if Eric Geboers can make Strijbos angry for the next seven months then Kevin might have his best year since 2007!

Cairol’s teammate Ken De Dycker had one of his best season’s ever last year and finished third int he series but a badly broken wrist leaves a question mark on Ken’s fitness coming into Qatar. But the big Belgian is always a threat on his day and could win races this season. Ken has no pressuire in the De Carli team and isn’t expected to go for the title and it seems to suit De Dycker.

Honda have to be getting impatient. They have the riders to win races but between injuries, bad starts or crashes, things just have not gone Honda’s way. Both Evgeny Bobreyshev and Max Nagl have shown they have the ability but both just can’t put it together.

Nagl has the most experience and has the stuff to challenge for the title but he just cannot stay healthy and his self-belief and abilty to grab a race by the scruff of the neck when he needs to win is still a question mark.

Bobreyshev again has speed but he needs to put a season together without any injuries before he thinks about really challenging for a title. But as both showed at the Nations, when it clicks speed is not their issue and they both know how to win races.

The most interesting team might just be Factory Husqvarna. A new team with two new riders entering the MXGP division with contrasting top level experiance. But both are causing an equal measure of uncertainty as to their standing within the field.

Rattray was world champion five years ago in the MX2 class but hasn’t raced a GP since and been insulated in the American way of life. It is hard to know if Rattray will come back like a Mickael Pichon and win a title  or a David Vuillemin and just be in and around the top ten with the odd top five.

Rattray sees himself as a championship challenger but may be underestimating the depth of field in MXGP after stating there is a big drop after the top five in MXGP. But he is the last guy to beat Cairoli in a championship (even if Cairoli did get injured that year) so he knows what it takes.

His teammate Aussie Todd Waters is coming in as an unknown  to the GP regulars and it seems he also doesn’t know half the riders he will be racing. This could be goood and bad for Waters as he won’t be intimidated by names but the depth of competition may shock him and getting beaten by riders he has never heard of may affect his confidence.

Aussies tend to be pretty resilient though and Waters will expect to be in the top ten, especially since he has been on pace with Rattray in the pre-season races. But many riders believe they had better credentials to get the factory ride and they will be hoping to show Husky that they should have got the ride ahead of Waters.

Yamaha have gone with only one full factory rider this year in the Rinaldi camp and they chose Jeremy Van Horebeek to do the job. Van Horebeek is underrated at times but this is his chance to show everyone he can be a top tier rider. He has certainly shown some form in pre-season to make Yamaha think they have made a good decision.

The Yamaha supporting cast is Rui Goncalves and David Philippaerts.

Goncalves was a last minute replacement for Dean Ferris at Dixon Yamaha and it could turn out to be a great move for both parties. Goncalves is certainly on the same level as Ferris if not higher when you factor in his experiance and he has another chance with a good team and machine.

Goncalves, like Van Horebeek, is underrated but he is a solid top ten performer and better every week. That is not an easy thing to do in a class as stacked as MXGP. If Rui  can stay away from injuries he could surprise a few people this year.

David Philippaerts is running his own team this year but will get support from Rinaldi Yamaha as he embarks on a Chad Reed style team owner/rider adventure. Philippaerts is the consumate professional, a former world champion who has fought back from serious wrist injuries. his pre-season form has been encouraging and he seems to have adapted back well to the Yamaha. We might just see Philippaerts best season in a couple of years.

Then we have the Brits.

Tommy Searle’s 2013 season didn’t quite go to plan and sixth in the championship was not what he saw in his crystal ball at the beginning of the year. Searle knows what it takes now in MXGP in terms of fitness and speed and has an extra years experience with the team. Searle will want to win races this year and challenge for the title and with no sand races except for Vaklenswaard, this could be Searle’s best chance of challenging Cairoli.

Shaun Simpson showed at Hawkstone that he is on form in 2014. Still on a high from his GP win at the end of last season, Simpson is back on KTM and back with Roger Magee. In theory it is the perfect combination for Simpson to have his best season ever in what might be the deepest field ever. Simpson wants to be top Brit this year and that means he will be looking to be a regular top five rider. If he gets the starts he might not be far away.

Jake Nicholls is coming into his debut season with a back injury which is not ideal in such a quality field. But Nicholls is a fighter and you know that he will do everything he can to make himself a success at this level. Nicholls was big for a 250f so the bigger bike should suit him better, and once fully fit could surprise people this year.

His teammate Matiss Karro is ready for a break out season. With no injuries so far Karro is in line to show just what he is capable of. The Latvian could just become a top ten threat this year on a regular basis.

TM have signed Davide Guaneri who has looked very good in pre-season to go alongside the always fast but often slow starting Tanel Leok. Both riders will hope the bike can match their talent.

With over ten riders receiving factory support it is going to be an achievement just to get into the top ten this year and the scary fact is some factory riders won’t make in at times! This leaves it even harder for the privateer teams and riders to make their mark.

But with riders of the quality of  Shaun Simpson, Joel Roelants, the rising star of Jens Getteman, former moto winner Xavier Boog, Matiss Karro, , Jake Nicholls and MX3 World Champ Klemen Gercar all capable of getting into the mix, starts are going to be at a premium this season!

MXGP is ready to go –  bring on Qatar!