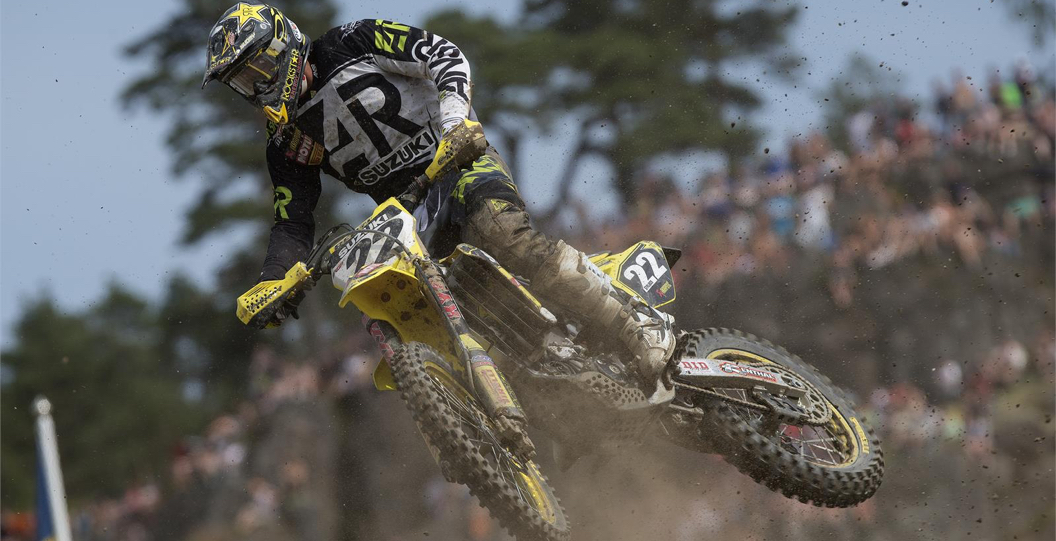 Romain Febvre: “The weekend was really great. Before we came here I won three in a row, but I’d never won both motos before. To win both motos in the GP, it’s a great weekend.

“In the first race, I had the holeshot; it makes it easier to lead, ride smooth and find good lines. In the second race I took the holeshot but I went a little bit wide in the first corner and Kevin came up the inside. I knew it would be difficult to pass him, because on Saturday we had a battle with him. I made one big mistake on the tabletop over there and went sideways, but after I was thinking ‘maybe second is enough to win the GP’. After two laps I was again on his wheel, so tried to pass him. I did it with three laps to go and it was enough to win.

“You know, the start is getting really important. Every race and every track it’s getting difficult to pass when we are the same speed. We had one week of testing, and we improved the starts a lot. We made a step forward on the track too; this weekend went pretty good so we can be happy about that.

“I don’t care what they say [about me riding too close to the edge] – I try to ride smooth. Today I made some mistakes. You can see with the results I don’t care.”

Jeremy van Horebeek: “It’s been a wild ride, I tell you. First of all there was a lot of pressure, because of last year – last year was just the perfect season. Then I broke my foot and had to come back from that, but finally I just regrouped. I’ve been working hard since I’ve come back and it started paying off already over the last weeks. I’m still not satisfied; I know I can do better.

“I’m on a good pace now, there are still some details; I’m struggling a bit with my starts and setup. I’m stoked about this today; second moto was really tough, as I knew I was in a position to be on the podium. I didn’t want to make any mistakes, because I’ve already made too many [so far] this year – I just rode really tight. It paid off.”

Kevin Strijbos: “The podium was good. I wasn’t too happy about the first race. I made a mistake in the second corner and got pushed wide, so dropped to fifteenth. Then I made a small crash by myself. It’s tough to close – you have to make a good start. That’s what I did in the second moto, and we had a good fight. It was tough and so fast in some places. In the end I got some cramps in my leg, which means I was pushing it. He passed me and I tried to pass him back, but it wasn’t easy.

“That’s what the goal is [to hit the top step], we worked quite hard after Teutschenthal – we made a good step again. Hopefully next week at Kegums we can go for the win or at least be on the podium.”