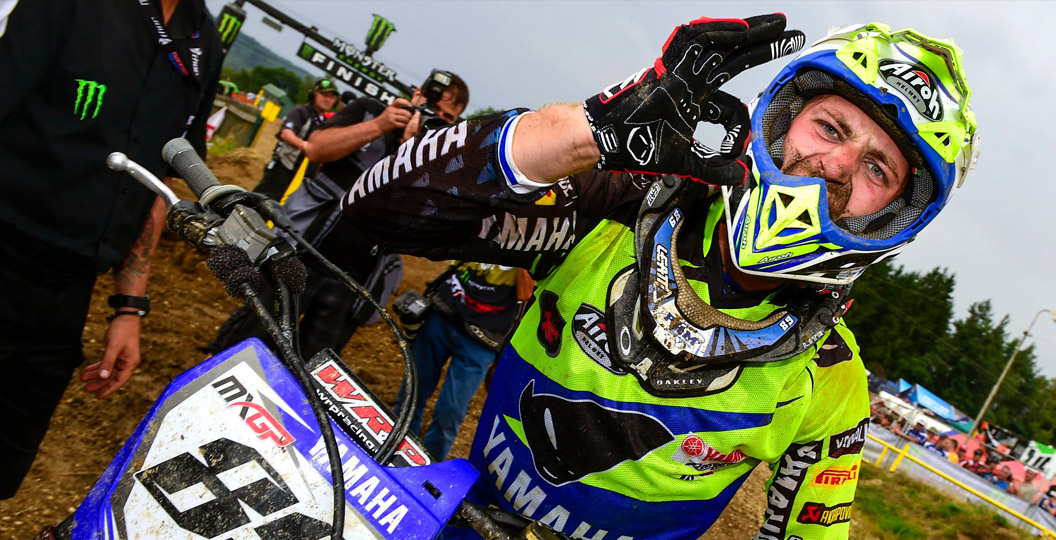 LOKET (Czech Republic), 27 July 2014 – Riders went in pursuit of traction this weekend with the steep and pebbly clay based circuit of Loket hosting round fourteen of the FIM Motocross World Championship and shelving what was, arguably, the most emotionally charged Grand Prix this season with Yamaha Factory Racing’s Jeremy Van Horebeek and Red Bull KTM Factory Racing’s Jordi Tixier both reaching the peak of their careers with their first ever race wins and overall victories.

It was the moment we had all been waiting for, and when it arrived there was not one person at the venue here in Loket who couldn’t help but smile and applaud Yamaha Factory Racing’s Jeremy Van Horebeek as he took one of the most deserving race victories and overall Grand Prix wins of the season. After thirteen rounds of podium riddled performances the young Belgian’s hard work, heart and determination finally paid its dues rewarding him with his first ever MXGP race win and overall victory. “I came into this weekend thinking this weekend is my time, after I made a mistake in Finland I was happy I did it, it’s great. The feeling is a little difficult to explain but these guys here in MXGP are the best riders in the world so it’s a special one, it won’t be my last, I’ve tasted it and now I want more.”

Even Rockstar Energy Suzuki World’s Kevin Strijbos, who rode flawlessly to victory in race one, couldn’t help but smile for his fellow countryman even though he was clearly guttered to have come so close to taking his first Grand Prix win since Lierop 2007 and having it not pan out. Despite the smidge of disappointment, the Belgian admitted, “I almost got Tony on the last lap, it was so close, so I have to be happy even though it’s a little bit of both, but I am happy to be back on the podium for sure.”

It’s no secret Red Bull KTM Factory Racing’s Antonio Cairoli is not a fan of Loket but nevertheless the defending champion was content with third overall, “I find Loket very difficult on a 350cc, I have to rev a lot which causes a lot of wheel spin and it’s difficult to find the balance with my power and corner speed, so I was looking forward to putting this GP behind me, but I did my best like I do every time but Jere (Van Horebeek) was on the gas today. Now I am looking forward to Lommel, I always look forward to going in the sand because I like it a lot.”

Taking home a respectable fourth after his seven round absence, Monster Energy Kawasaki Racing Team’s Gautier Paulin posted a pair of sixths, both being hard fought with race two being his best performance of the day after making life difficult for himself when he flogged the gate about one second too soon and started from dead last.

Hitachi Construction Machinery UK KTM’s Shaun Simpson appears to have found his groove and is starting to make a dent in his FIM Motocross World Championship campaign after locking down his season’s best finish with fifth overall.

As for Rockstar Energy Suzuki World’s Clement Desalle, his team has confirmed the super smooth Belgian has broken his scaphoid and will be shifting his focus toward healing up and he will miss the rest of the season.

With so much hype surrounding MX2 this weekend it was expected to be epic and it definitely didn’t fail to deliver. All twenty-one thousand spectators were captivated by the speed, drama and intensity as the eager youngsters rode with their hearts on their sleeves in hopes of taking home their first ever FIM MX2 Grand Prix victory.

Red Bull KTM Factory Racing’s Jordi Tixier silenced all his critics today with his unfaultable performance in race one when he made quick work of the hot starters KTM Silver Action’s Jose Butrón and Standing Construct KTM’s Valentin Guillod, and demonstrated a surprisingly high level of comfort out front as he rode toward his first ever MX2 race victory. With one race down and another to go, the highest ranked Frenchman was put to the ultimate test after an average start left him brawling for points in what was one of the gnarliest battles of the season. At the end of it, the KTM rider banked fourth to reach yet another milestone in his career with first ever MX2 Grand Prix overall. “I can not believe it, the hole weekend was really good for me, already on Saturday I had a good feeling on the track only Romain (Febvre) was a little bit faster than me but I had such a good feeling on the track and so much pleasure to ride and I won today, so it was really good.”

Speaking of race one’s FOX Holeshot getter, Standing Construct KTM’s Valentin Guillod rode incredibly this weekend to uncork a bottle of bubbles on the MX2 podium for the first time in his career with second overall.

Probably the most surprising performances of the weekend was that of Yamaha Factory Racing’s Christophe Charlier who came into this weekend completely over looked with three of his fellow French competitors in the running for the MX2 title stealing the limelight. After missing six Grand Prix’ this season after fracturing his shin in Thailand, Charlier buried his seventh in race one with a stellar performance in race two which saw him gobble up the competition to claim his first MX2 race victory and podium finish this year with third.

Meanwhile yesterday’s qualifying heat winner Wilvo Nestaan Husqvarna Factory Racing’s Romain Febvre was forced to settle for fourth, a result that doesn’t reflect the speed or effort that went into his racing this weekend. After a solid second place in race one, the Frenchman fought tooth and nail in race two after a bad start left him buried at the back of the pack, to work his way up to third only to have it all come undone a few laps from home with a clumsy error.

In typical Jose Butrón fashion, the KTM Silver Action Spaniard started at the front of the pack in both races. Despite his best efforts to run the pace, for one reason or another he couldn’t maintain it for the entire 30 minute plus two lap duration meaning he would have to be content with two fifths for fifth.