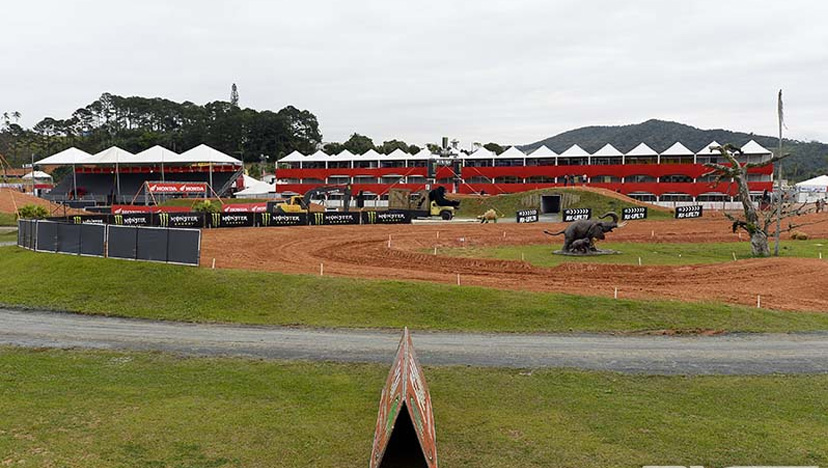 BETO CARRERO (Brazil), 26 March 2014 – Located in close proximity to the biggest theme and amusement park, not only South America but the entire Southern Atmosphere, ‘Beto Carrero World’, the visually impressive red clay circuit of Beto Carrero gets ready to host round three of the FIM Motocross World Championship. The impact of Brazil hosting a round of the FIM Motocross World Championship has been significant, this year marks the third consecutive year the pits of MXGP will grace Beto Carrero and is proving very popular among the Brazilian public with more than 50% of the online tickets already sold-out.

Last year Red Bull KTM Factory Racing duo Antonio Cairoli and Jeffrey Herlings stole the hearts of the Brazilian fans with their stellar performances. Both Cairoli and Herlings dominated their first races, with Cairoli backing that up with another win in the ‘Super Final’. As for Herlings, the ‘Super Final’ didn’t go to plan after a fall around turn one forced him to slice forward from the back of the pack. While Herlings put in a remarkable ride, reaching second place, he couldn’t carve through the sticky mud of Beto Carrero fast enough to catch KTM Silver Action’s Jose Butrón who went on to claim his first ever MX2 race victory.

With two rounds already done and dusted, two different round winners and three different race winners, unpredictability is the key to making MXGP season 2014 that much better than year’s prior. After taking back the red plate in dominating style in Si Racha, Thailand, Red Bull KTM Factory Racing’s Antonio Cairoli will be undoubtedly the hot favourite this weekend in Beto Carrero as he continues his hunt for his eighth FIM Motocross World title.

Round one winner, Monster Energy Kawasaki Racing Team’s Gautier Paulin had a tough time at round two in Thailand with the sweltering heat inducing havoc on his machine. Although valuable points were lost, the series is still long and after his outstanding performance two weeks ago where he won the Mantova Starcross in Italy, there is no doubt Paulin’s struggles in Thailand have just fired him up even more.

Meanwhile Rockstar Energy Suzuki World’s Clement Desalle has found another gear since the opening round in Qatar. Desalle proved he’s a genuine threat to this championship when he led the majority of MXGP’s races in Thailand to finish second overall for the day, leaving him fifth in the MXGP standings, five points shy of Max Nagl in second.

Team HRC’s Max Nagl’s determination to come back strong in 2014 has been so far awe-inspiring. After winning the first race of the season and wrapping up second overall at the opening round of MXGP in Qatar, the German held onto that spot with a respectable fourth place overall at round two in Thailand. Coming into this weekend, Nagl will have the confidence of a second place finish in MXGP’s round of Brazil race one last year which in combination with his sixth in moto two left him in fourth overall.

Yamaha Factory Racing’s Jeremy Van Horebeek was proud of his fifth place finish in Qatar, but is definitely not prepared to settle until he is on top of the box. This was evident as the Belgian rode super smooth in Thailand to take home a comfortable third overall, and will be looking to keep moving in the right direction this weekend in Brazil.

Rockstar Energy Suzuki World’s Kevin Strijbos has been recovering from a hip injury he got during a crash while training over the winter. While the on-going struggle to get back to 100% has been slightly hindering his progress in the championship standings, his lap times have been fast and he already has a qualifying heat win under his belt. After standing on the third step of the podium at the MXGP of Beto Carrero in 2013, there is no counting Strijbos out of the chase this weekend.

Red Bull KTM Factory Racing’s Jeffrey Herlings bounced back with a vengeance in Thailand, absolutely dominating the MX2, demonstrating what was expected of him coming into the opening round of the 2014 FIM MX2 Word Championship. Unfortunately news has just broke that the reigning two-time MX2 World Champion will not be competing this weekend due to tearing a muscle in his shoulder at the Dutch Championship last weekend leaving the MX2 wide open.

With Herlings out, the MX2 has just caught fire with the red plate within reach of more than five of the top ten riders. Flying the flag for the Dutch fans, Rockstar Energy Suzuki Europe’s Glenn Coldenhoff has taken it up a level this year. The young Dutchman is currently sitting third in the MX2 overall standings, and will be coming into this weekend with added confidence after dominating every race of the Dutch Championship over the last two weekends.

Sitting second in the overall standings, CLS Kawasaki Monster Energy’s Dylan Ferrandis has the taste of his opening race victory lingering in his mouth. The super talented Frenchman has proved he’s got the goods, and is out to show the world he is a solid threat to the MX2 championship.

BikeIT Yamaha Cosworth’s Max Anstie is not shy in putting it out there that he has what it takes to challenge the FIM MX2 World Champion Jeffrey Herlings. In Qatar there was no doubt Anstie had the speed, but bad luck hindered what could have been his best ever result. At round two in Thailand, the charismatic Brit had a shot at the win, but didn’t quite have enough to seal the deal.

Wilvo Nestaan Husqvarna Factory Racing’s Romain Febvre shifted up a gear in the second race in Thailand. Coming into the closing laps it was obvious the Frenchman was on a charge, cutting down the gap to second place considerably. Obviously fitness and heat is not a problem for the youngster, which could be a determining factor as we prepare for another warm one here in Brazil.

Racing along side a theme park may seem familiar for CLS Kawasaki Monster Energy’s Arnaud Tonus with a ‘rollercoaster’ symbolising the Swiss sensations’ start to the season. With two brilliant races already in the bag which saw him ride to second place in race two in Qatar and third in race one in Thailand, Tonus will be looking to be consistent this weekend and post two solid scores.

Meanwhile, another one to watch this weekend is KTM Silver Action’s Jose Butrón. MX2’s number three seed has had a somewhat rough start to the year as he only sits eighth in the standings, but this weekend could be the Spaniards turning point as he lines up with the sweet memory of his first ever race win here at this very circuit.