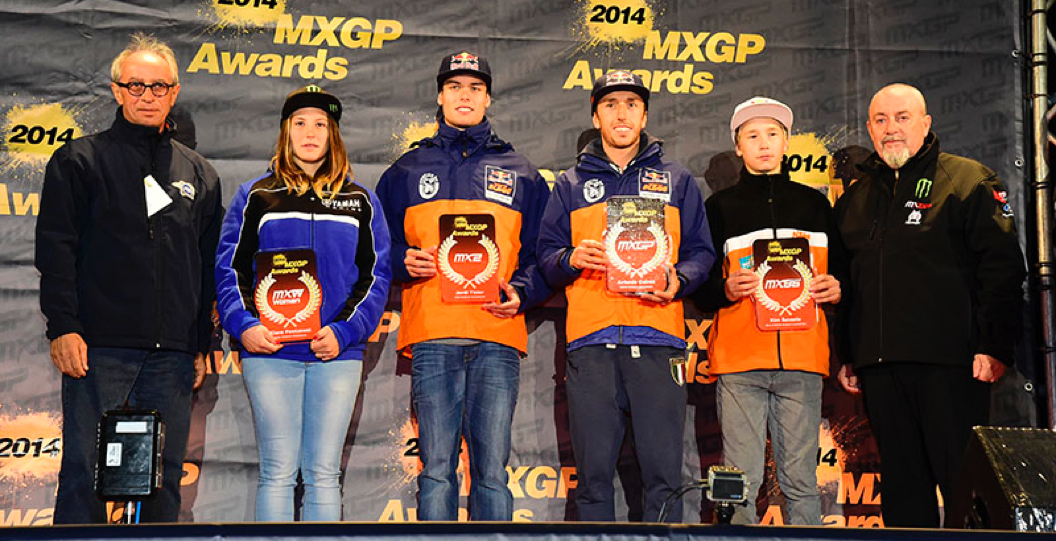 KEGUMS (Latvia), 27 September 2014 – In the dusk of the night here at the 2014 Monster Energy FIM Motocross of Nations, the annual MXGP Awards ceremony took place. With spotlights illuminating the Skybox and podium area where the awards were presented by MXGP Hosts Paul Malin and Amy Dargan, the chilly night air was warmed with celebration as the 2014 FIM Motocross World Champions, European Motocross Champions and the award winning MXGP industry names were honored.

On with the presentation of the awards, Mr. Luongo and Mr. Ippolito personally congratulated and handed the awards to the 2014 FIM Motocross World Champions and the award winning industry names, with the stand out industry prize winners being Losail, MXGP of Qatar being awarded asMXGP’s Best Organizer, Maggiora, MXGP of Italy as Best Cooperation, Matterley Basin, MXGP of Great Britain as the Best Track, Lommel, MXGP of Belgium as the Best Media Center and Best Paddock and MXGP of Leon as the Best Promotion.

Dr. Wolfgang Srb was the next official welcomed to the stage to award the European Champions.Rockstar Energy Suzuki Europe’s young German Brian Hsu won the Jan de Groot award, which is an award honoring the most promising young talent of the season.

Meanwhile, as they do every year, Youthstream donated a cheque to Heinz Kinigadner and Pit Beireron behalf of the Wings for Life foundation, while Tag Heuer awarded both “Tag Heuer Best Lap” award winners Jeffrey Herlings and Antonio Cairoli with an exquisite Tag Heuer watch. The eight time FIM Motocross World Champion Antonio Cairoli was also awarded with a special one of a kind painting personally painted by a highly acclaimed artist, Rob Kinsey.

Below you will be able to find a list of all the MXGP award winners: