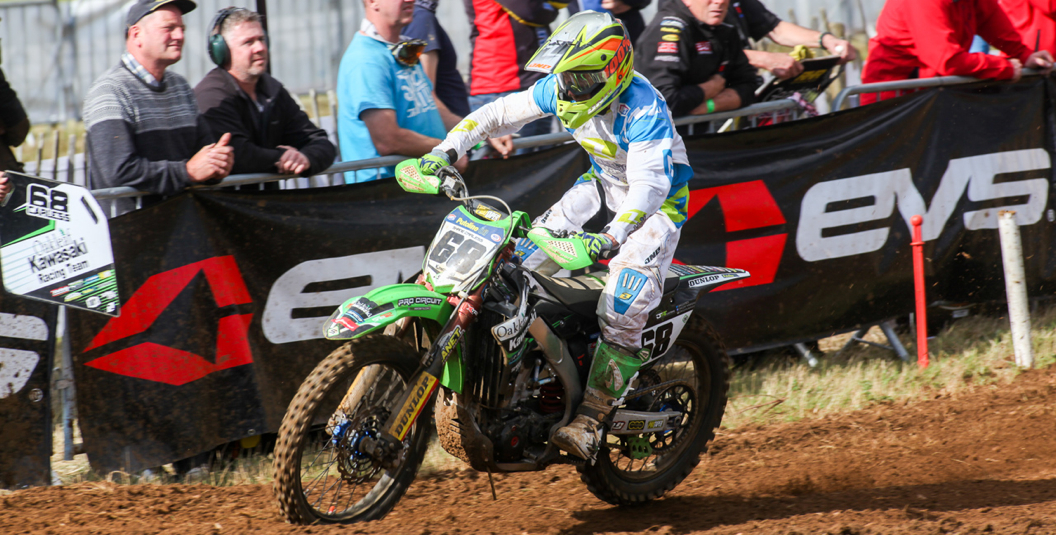 Oakleaf Kawasaki’s Shane Carless flew the lone flag at the sixth round of the MX Nationals at Culham in Oxfordshire this past weekend as team colleague Priit Rätsep raced in Estonia. AMCA contender Luke Mellows found himself just outside Gloucester in Brookthorpe for the sixth round of the AMCA Championship.

For Carless, qualifying didn’t quite deliver the position he had been expecting, ending the session eighteenth. The first race of the weekend, on Saturday afternoon, didn’t get off to the start he wanted either. A nasty crash on the start straight sufficiently unnerved him to lose the opportunity to get out in front, resulting in a hard slog from dead last to a finish in fourteenth after thirty minutes.

The next day’s first race improved on the previous day; this time Carless got off the start better, and with a consistent run, he was able to pick off competitors one by one throughout to finish tenth. The final race of the day on a very challenging track was the most consistent of all. This time Carless was in the top ten through the first corner, and despite small mistakes on the first lap, held off tough competition to end eleventh for a tenth place overall on the weekend.

At Brookthorpe, Mellows got his day underway with a fourth place in qualifying. Clearly the gate he chose worked well; second out of the gate, he soon was in the lead, ending the first of three races several seconds in the lead. The second race didn’t get off to as good a start as the first; after a red flag and a restart, Mellows had to work hard throughout the race to muscle his way forward to the lead with two laps to go.

The final race, finally underway after several restarts, saw Mellows in fourth again. For much of the race, he duelled with Brad O’Leary for third, eventually emerging victorious, and free to chase after the leaders ahead. Time however ran out for him to reel in the runner-up, Richard Cannings, and he had to make do with a third place. With the results tallied up, Mellows took the day overall and moved into the championship lead.

Qualifying I managed to get a couple of laps in but that wasn’t good enough and I finished eighteenth. In the first race there was a big crash on the start and I got distracted, was last and came through to fourteenth. On Sunday’s first race, didn’t have the best start but kept on plugging through and ended up twelfth, and the last race of the day was really tough. I actually had a decent start, but dropped a few positions and made a few mistakes on the first lap, but I finished eleventh for a tenth overall.

I enjoyed today, it was a great result and the series so far has been really good. Thanks to Oakleaf Kawasaki and all the support from our sponsors!

With the season now coming to the end, results are important. For Shane, it’s still somewhat of a struggle; although he tries his best, the results are not proving the rider he is. The team gave the go ahead for Priit to race in Estonia to promote his sponsors. From the deal at the beginning of the year with him running British and the Redbull, he would’ve raced three GPs minimum, so with the budget getting tight, as we have stretched the budget to compete in the MX Nationals, British champs and two Grand Prix, it’s becoming tough times for the team at present.

Although we have great sponsors on board, none of the deals were increased to cope with the extra races so product and parts budgets were smashed some time ago, and as always we try our best, but this season has been a nightmare for sure, with rescheduled races and changing championships. All this going on in our first year as an official team, we now need to see what our situation is for 2015. That aside, the great news of Luke Mellows now gaining the lead in the AMCA championship with a round left will hopefully give us another championship to our name, and we look forward to the final round.