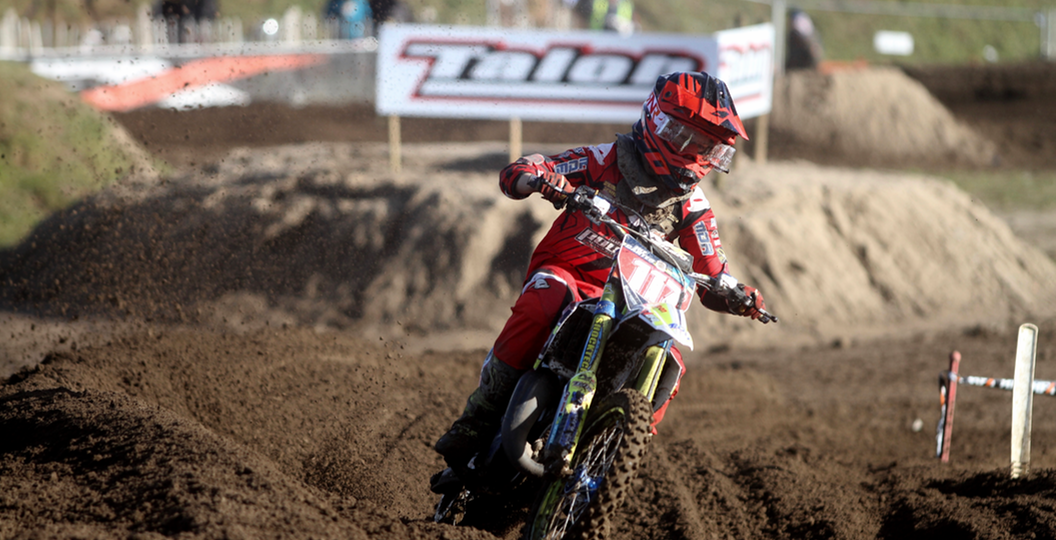 Running up to the first youth national race of the season, the MX Nationals organisers were battling with mother nature. The majority of meetings would have been called off, but the Preston Docks team along with MX Nationals staff managed to get the track ready just in time for racing. The track was very demanding for the young riders on the Saturday, but by Sunday it was in great condition.

It’s always interesting to see if riders improve season to season and how they tackle riding against existing riders to those classes. Some will look at it as a transitional year, whilst others will be looking to stamp their authority. From my point of view, and I’m sure others can relate, it is most interesting seeing last year’s 85cc big wheel riders step up to a 250F. The step is so big that it really is sink or swim time, but you get a little insight into how they will fare when the time comes to move into MX2.

It’s just my opinion, but I believe all big wheel riders should be made to do one year on a 125cc. I believe, along with many others, that it is a good opportunity to race a bike to its maximum. I would also like to see a mod class where the bikes are standard, so you then have the best at that age racing each other. This offers them a chance to learn about the bigger bike and limits the damage they may do compared to going straight to a 250F that has an incredible amount of power for a 14-year-old. Let’s face it, the cost of racing would be more manageable in an already expensive sport.

However, I digress, this is not an article about compulsory 125cc two stroke racing, it’s about the MX Nationals and it’s great to see them have such a successful first round. Race day featured a tough, challenging track and there were some great performances throughout the weekend.

Ike Carter won the small wheel 85s this past weekend, in what was only his third time at the MX Nationals after completing two rounds in 2015. ‘117’ came out swinging, taking both moto wins on the Saturday and one win on the Sunday securing ninety-seven points out of a possible one hundred. Now the red plate holder, Ike will head to Landrake with the target firmly on his back.

With the top guys from 2015 moving up to MXY2, the big wheel class was wide open. Sam Price, one of the guys that stuck to the smaller machine, had a strong weekend finishing third overall and even managed to take the win in race two closely followed by Lewis Hall just five seconds further back. It was Joel Rizzi who stood out from the rest aboard his new RFX KTM, as he finished every race in the top three and took the chequered flag in two of them on his way to first overall.

Misfortune cost Alexander Brown the overall, as he did not finish the first race, but he was able to bounce back with two wins and a second in the following motos, which was good enough to salvage third overall. The new boys to the class certainly held their own on the larger machines with Dylan Woodcock and Jack Bintcliffe finishing in fifth and sixth place respectively. A word has to be said about Taylor Hammal, who had his 125 screaming all weekend to contend with the guys on 250s. He ended up second overall, just ten points behind Michael Ellis.

He may not have won the overall, but Ryan King worked hard all weekend and only seemed to get better and better in the Junior Clubman class. Ryan gave it his all following an average day one and collected a first and a third. However, it was Sean Barnsdale who took the overall just one point ahead of Josh Canton. It will be interesting to see how the championship heats up at round two.

The MXY2 champ from 2015 stepped up to the expert MX2 group for 2016. After a stellar performance in the youth class at the Hawkstone International, Henry Williams was able to continue that form at Preston Docks. He only dropped three points over the entire weekend, so holds the series lead by sixteen points over Jansen Day moving forward.

In Expert MX1 the reigning champ, Luke Mellows, got to work right where he left off taking a clean sweep of all four race wins; he was the only rider from the entire event to do so. There was no clear runner-up, as four different riders took second place in the four races, but Edward Briscoe’s consistency paid off as he finished second overall with a second, two thirds and a fourth.

The series now heads south to what will hopefully be a sunny Cornwall and the beautiful natural circuit of Landrake on April 9th and 10th.