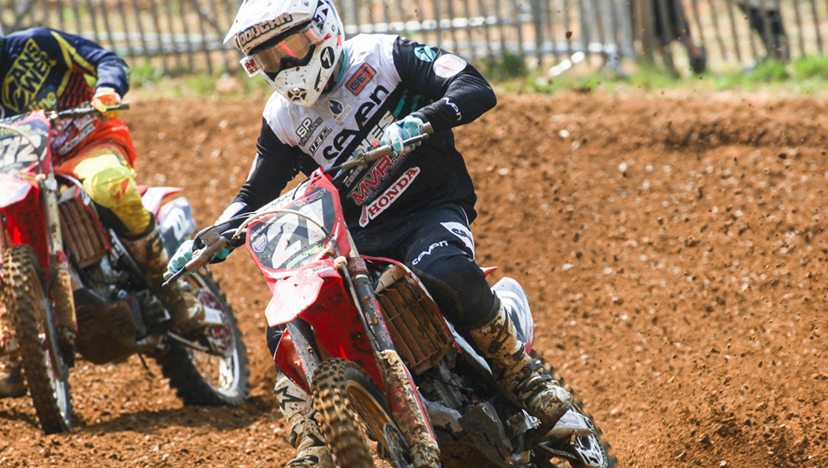 For MVR-D Honda, Canada Heights in Kent is arguably the team’s home track. Up the road from team HQ, the track looked perfectly groomed when the team pulled into the paddock on Saturday afternoon.

On Sunday the beautiful weather continued and it was in glorious sunshine that sole rider Jason Dougan qualified in eighteenth after twenty minutes on the track. The day’s racing did not get off on the right foot, however. The first race ended in disappointment for Dougan as a crash in the first corner left him playing catch-up all race long, ending in twenty-first.

The second and third races were virtually identical. Off to a good start while nursing an injured ankle and a battered thumb, Dougan was embroiled in battles for his position in both races, culminating in two seventh places for a twelfth overall on the day.

Crap, that sums it up really. In the first race I crashed in the first turn, got going again, the track was difficult to pass on and I ended up twenty-first, which I was a bit disappointed with, because I would’ve liked to have scored at least one point, but never mind. I hurt my ankle in that one as well. In the second one I didn’t get a great start, pretty much rode around in seventh, nursed my ankle and just rode around trying to miss the bumps. The last one was pretty much the same, got a bad start but managed to make some passes early on, then rode around and got seventh again. Overall it wasn’t great, but it could’ve been worse. I’m happy with digging in and getting on with it.

Today’s been an average weekend, Jason crashed in practice and hurt his thumb, then in the first race he crashed in the first turn, got his foot caught in the rear wheel and also had a technical problem to deal with as well. The latter is nothing to do with him, it’s the team’s fault, which is disappointing. Twenty-first, then seven, seven, he managed those two races and I thought he’d done well in those two races considering that he was beat up and not having a great start to the day. Overall it was OK, he’s in one piece, and we’ll charge on to the next round