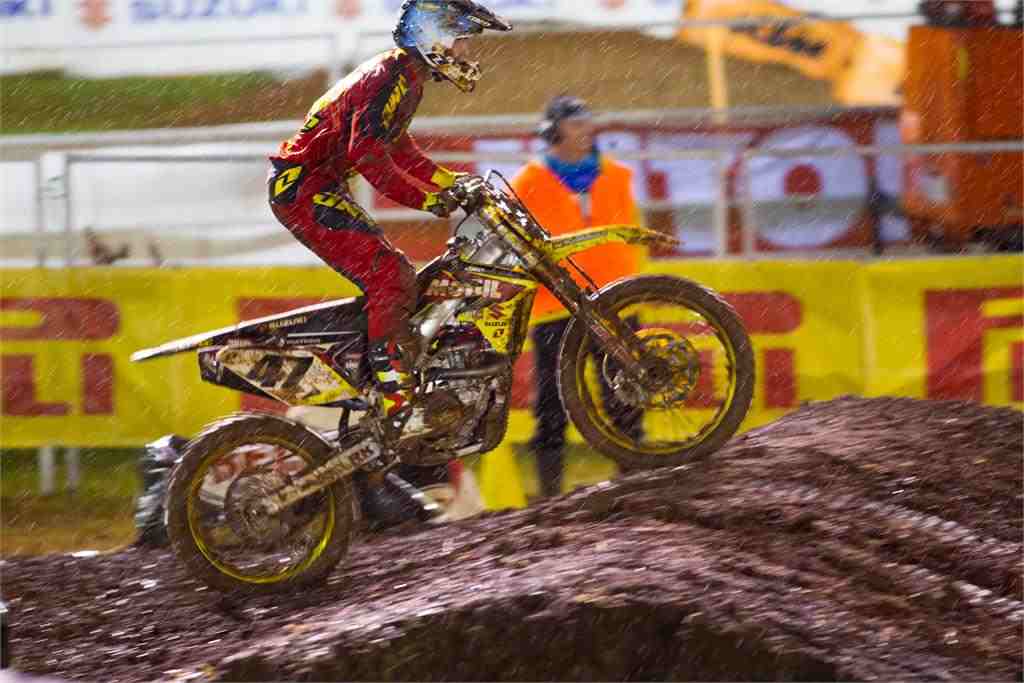 Motul Pirelli Suzuki’s Todd Waters clinched his first Australian Supercross Championship podium of the season with a fighting third in the premier Pro Open category at Toowoomba at the weekend.

Waters rode his 2013 model Motul Pirelli Suzuki RM-Z450 to the final podium position alongside international stars Chad Reed and Ben Townley at the penultimate round of the season, elevating him to third in the series with one round remaining.

Rain resulted in a challenging mud race at round three in Queensland, but Waters rose to the occasion with second in his heat race before battling to third place in the reduced 15-lap Main Event.

“The weekend went really well,” the 21-year-old Gold Coast resident said. “I qualified fourth and the track suited me; it’s just a shame it rained. In the heat race I was second and I had to pass a lot of good guys to get that result. To finish the final on the podium was good. I didn’t feel as good as in the heat, but we did what we had to do for the podium.

“The final round will be a big battle for the podium in the championship, but this week I’m just going to do a heap of starts and make sure I’m well rested for the weekend. After that all I can do is go out and give it my all for the team.”

Motul Pirelli Suzuki Pro Lites contender Steven Clarke rode his RM-Z250 to the opening heat race win of the night, before finishing fourth in the final. Clarke sits fourth in the standings after three of four rounds, now 16 points out of the lead.

“It was a promising start to the night with my heat race win, but the final was really tough in difficult conditions,” said Clarke. “I had to work my way up to fourth and just didn’t stop trying in the mud. Hopefully it’s dry for Newcastle and we can finish the year with a strong result.”

Team manager Jay Foreman was satisfied with the results on a difficult evening at Toowoomba, and is now busy preparing for what will be the team’s home round in Newcastle this coming weekend.

“It was a very rewarding result for Todd and he was riding really well throughout the round at Toowoomba,” said Foreman. “Steven was also impressive in the conditions, so we will take a lot of confidence into this weekend’s final round and look to finish the season with some more good finishes.”

The series will conclude at Newcastle Showgrounds in New South Wales on Saturday, November 17th. More information can be found on http://australiansupercross.com.au.