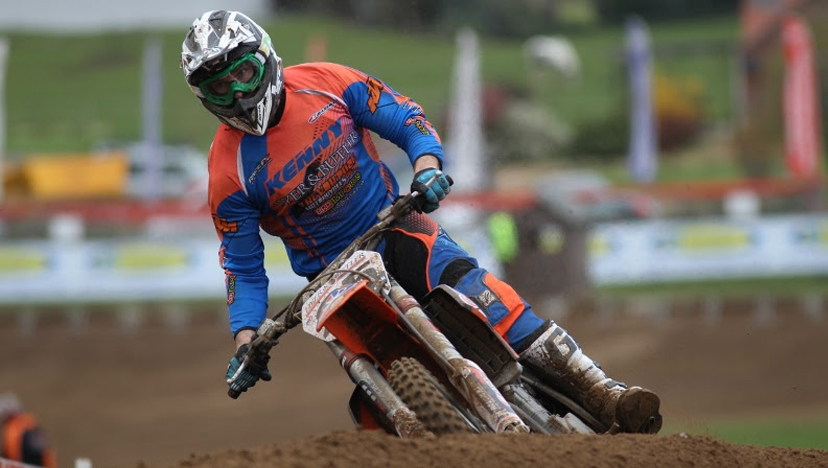 Mixed Day at Lyng for Dyer and Butler KTM

The second round of the Maxxis ACU British Motocross Championship saw Dyer and Butler KTM make the trip to Lyng in Norfolk. The sandy hillside circuit was in great condition when the action started on Sunday morning and quickly became very rough and technical.

The day started with the qualification sessions for all three classes, in the MX2 Steven Clarke posted an 11th fastest time to transfer into superpole where he was able to improve further and finish 8th fastest. In the MX1 class Jamie Law narrowly missed out and finished 13th fastest, while in the MXY2 class young Liam Knight produced a great lap time to take pole by over half a second.

After the lunch break it was time for the main races to take place. In the MX2 class Clarke started the first inside the top 10 and rode a strong race moving himself up to 6thplace at the finish. After a decent first race Clarke was looking for a better result in the second race but a crash on the opening lap left him down in around 30th and with a lot of work to do. As the race progressed Clarke moved forward to finish in 11th place. In the last race Clarke rode a steady race in 7th place but suffered a small crash on the last lap saw him loss two places and finish in 9th. Clarke’s results gave him 9th overall on the day and helped to move him up to 12th in the Championship.

In the MX1 Jamie had a tough day of races, starting with a mechanical problem in the first race on the last lap which saw Jamie limp home in 14th. Then in the second race Jamie was forced to go out on his spare bike and struggled with the start and was unable to his flow during the race and finished in 14th place once again. The final race of the day was to be Jamie’s best and saw him battle inside the top 10 for the whole race, eventually finishing 10th. At the end of the day Jamie finished 12th overall and 10thin the Championship.

After taking pole in the MXY2 class Liam was hoping for a good day and started the first race inside the top 5 and slowly picked his way passed the riders ahead to get into second. Unfortunately once in second there was not enough time left to mount a challenge for the lead. In the second race Liam once around rounded the first lap inside the top 5 but then suffered a crash on the second lap which dropped him down the order and into 20th. For the rest of the race Knight battled hard to recover and finish in 7th place, taking 4th overall in the process and missing the podium by just 2 points.

Paul Hobbs – Team Manager – it’s been a bit of a mixed day today, Jamie suffered a technical problem in the first race which we need to get sorted, but he toughed it out today and is still in 10th place in the championship. In the MX2 Steven had two good rides and just needs to get that jump out of the gate and we would be right up there. And then Liam in MXY2 had a really good day, it was just a shame that the result in the second race meant that he missed the podium.

Steven Clarke – it’s been up and down today, my riding was a little bit off the pace but I wanted to come here and score solid points in all three races and I did that which is a big improvement on Landrake. I was 6th in the first race and then 11th in the second after a first lap crash, then in the last race I was 7th until the last lap when I changed my line and crashed to finish 9th. I got 9th overall and I’m now 12th in the standings so it’s a start and we can work on it from here.

Jamie Law – Today has been a really tough day, the first race I had a mechanical and on the last lap the bike started making a funny noise so I stop to check and lost a couple of place and then decided it was the last lap so rode round to the finish and get 14th. Then the second race I was on my spare bike and wasn’t used to the set up and struggled a bit, so finished 14th. Then in the last race I felt strong and had the energy at the end of the race and finished 10th. Overall we had a bad day but it could have been much worse.

Liam Knight – it’s not been great but it was ok for the first round. In the first race I got 2nd and then in the second race I crashed on the first lap and recovered to 4th before crashing again and finishing 7th. I’m 4th in the points but I feel good going into the next round.

Full results can be found at