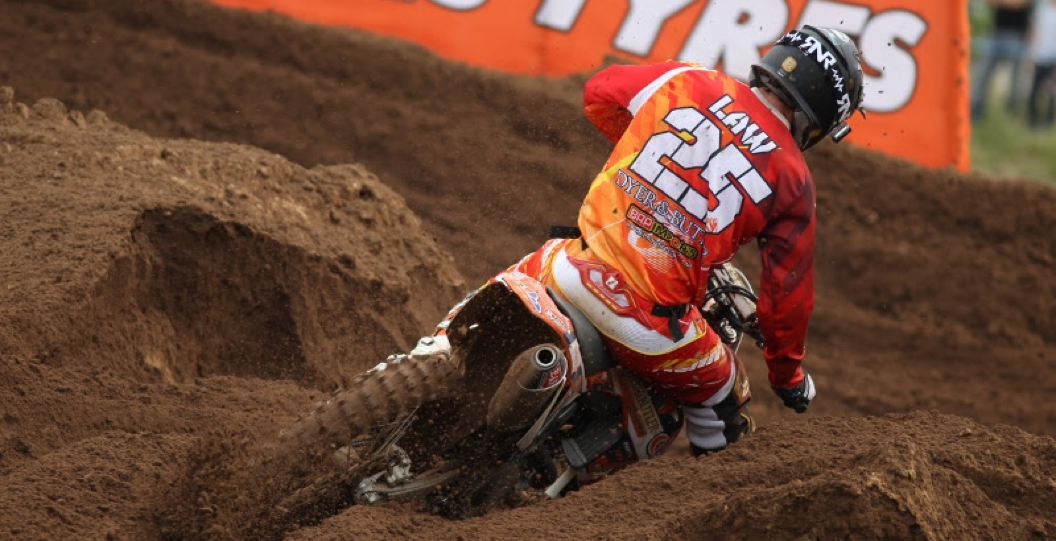 FatCat Moto Parc was the scene of the sixth round of the Maxxis ACU British Motocross Championship on Sunday. The redesigned and improved FatCat circuit produced some great racing in all classes.

Heavy rain on the Saturday produced the perfect race circuit when the riders went out on track for Qualifying. In the MX2 class Steven Clarke finished in 14th place, while MXY2 regular Liam Knight finished 19th fastest in his first MX2 meeting of the year. In the MX1 class Jamie Law posted a solid 13th fastest lap time.

In the MX2 class Steven Clarke produced a consistent set of results, finishing inside the top 10 in all three races. Steven struggled slightly with the conditions and bike set early on in the day and improved as the day progressed, taking his best result of eighth in the second race. Clarke 10, 8, 9 scorecard was enough for 9th overall and 8th in the championship.

Also in the MX2 class was Liam Knight, the teams youngster produced three well-deserved point scoring rides. The first race saw Knight finish in 14th before taking 18th in the second race. The last race was to be his best of the day, after starting in 14th Knight crashed and slipped out of the points and was able to recover and finish in 14th again for 15th overall.

In the MX1 Class Jamie Law suffered a tough day at the office, in the opening race Law suffered a slight bike issue and tried to salvage points but missed out in 21st. In the second race Law was able to turn things again and finish in 7th place. Unfortunately the last would see yet more bad luck as a crash on the opening lap saw Law at the back of the pack and charging hard only to crash heavily and retire from the race. Jamie’s second race result gave him 16th overall on the day and he now sits 11th in the Championship.

Steven Clarke: it’s been a rough day for me really, I struggled in qualifying with suspension and that meant I had a bad gate pick. We managed to sort out the setting for the races but the track was really tough and I couldn’t get my lines together and didn’t really flow. Overall it was a rough day and one I’d rather forget and focus on the next round and recover the points there.

Liam Knight: It’s been really good today, it’s the first MX2 I’ve done this year and I was happy to qualify in 19th. In the first race I got 14th so was happy then in the second race I got a bad start and recovered to 18th and then in the last race I was 14th and crash and then recovered back to 14th so I race really happy with that result as the track was so hard.

Jamie Law: It’s not been the greatest of days for me really, I suffered a slight technical problem with the bike in the first race and tried to just score points but I finished 21st. Then in the second race I started just outside the top 10 and worked my way up to 6th and finished 7th after Anderson passed me. Then in the last race I washed out in the second corner and was last way, then I was come though the field and just caught a rock on the take-off of the jump and had to jump clear of the bike, but I caught me in the back so I’m a bit sore.

Paul Hobbs (Team Manager): The weekend has been a bit up and down for us really, Jamie’s crash in the last race was a bit of a shock for us, but thankfully he seems to be ok. Liam did really well in his first MX2 of the year to get two top 15’s and Steven rode well for three top 10 finishes.