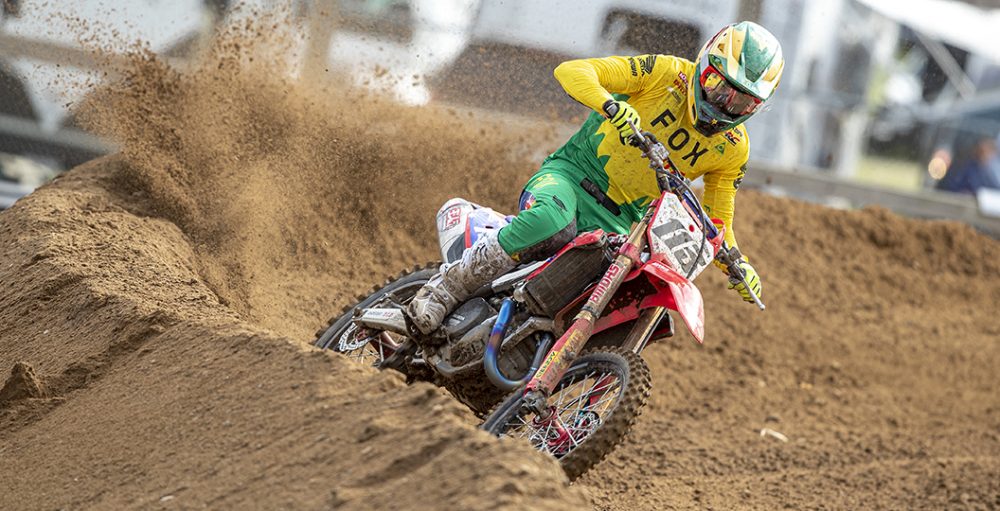 Returning to RedBud for the 2022 Monster Energy Motocross of Nations was poignant for Mitch Evans of Team HRC, as it was at the same circuit that he first broke onto the international scene. Now, returning as a full-factory rider and MXGP contender, he had loftier expectations with Team Australia. The Australia trio of Evans, Hunter Lawrence and Jett Lawrence was quite exceptional and thus they garnered a lot of attention in the weeks prior to the race. What most didn’t know, however, was that Evans had broke his hip at the MXGP finale…

MX Vice: Mitch, what a weekend, how are you feeling?

Mitch Evans: It was a really, really good weekend apart from the last race that left me a little bit bummed that I didn’t pull through. I cannot complain, especially with the lead up that I had coming here.

Let’s talk about that because literally the bomb dropped today. We saw the crash in Turkiye, so tell us.

The only people that knew up until about 30 minutes ago were my girlfriend, my trainer and my brother. So sorry to Mum and Dad, and everyone else on Team Australia, but actually I broke my hip in that crash in Turkiye. I found out on the Friday after Turkiye. I got x-rays on the Monday, and they said all good, and then it was not really getting any better, so I got a CT scan done and it was broken. They said it was not like in a part that’s important, so if I can deal with the pain then I can ride.

I got better and better over the weekend, so I cannot complain. It certainly wasn’t perfect and not riding for three weeks did not help, but happy with how the weekend went. I saved all of my good starts for this weekend. I nailed the starts all weekend so really, really pumped with Team Australia and the boys for pulling through and getting on the podium. I did not achieve that myself this year, so it was sweet that they pulled through and I got to spray the sweet champagne today.

Withholding the injury was a calculated decision, you knew that you were going to get better for this point. You just had to rest, manipulate the muscle with a lot of massages. This must have meant so much to you, which is why you knew it would get better and you could do this.

Exactly, I was missing my sister’s wedding that was last weekend. There was a lot of pressure on me to make a decision whether I was going to be okay to race or not. Giving up an opportunity to represent Team Australia is not an easy decision and I said I would do whatever I possibly can to make sure that I’m okay riding. Thankfully, we had the team physio work wonders on me this weekend and just got through the pain. I cannot complain with how good it actually felt all weekend. I am grateful for my decision and the people around me for helping me get through it.

Your Mum posted some photos this week of you and the Lawrence brothers growing up. Who would have thought that you would have grown up to be on the same MXoN team?

I cannot speak on the other two but, for sure when we were duct taping Jett to the toilet back in 2013, I never would’ve thought that it would lead to this and to the level that we are riding at all around the world. It is so cool that we get to share this experience together and be on the podium together. We are a young team, so watch out for the next couple of years. I hope we did Australia proud. Early wake up for everybody at 03:00am (back home), so I hope it was worthwhile getting up early to watch. I’m really happy with how the weekend went and excited for Ernee next year. We have got maybe six or seven years in us where we can really start to hit our stride.

Next year Jett will have a full season of outdoors on the 450. He’ll be even more prepared and less nervous than he was yesterday. That guy… He is a special guy, because normally nerves don’t get to him and that was the worst I’ve ever seen him. He was so scared. First, he was scared about hitting the leap and then he was nervous about his race. I can completely understand. It’s the biggest race of the year. A lot of pressure on to represent your country and first race on a 450 at 19 is not easy.

What was it like coming here with the American fans, as they were digging you?

Yeah, I think it really helps that Hunter and Jett have a following over here and in Europe. They are really liked. We got a really nice, warm welcome on Friday when we did the parade lap. It was cool to see some of them, they were a little bit too patriotic to wish us well. It’s all in good fun and that’s what this race is about – supporting your country. For the majority of them, it was really cool to see how much they supported us.

When you came here for the first time on Friday, what were your thoughts on the track?

I really liked it from the beginning. We were here in 2018 and we did not get to ride it in the dry, so I was so excited to finally get to ride it yesterday in the dry. I’m grateful we got at least one day in the dry. I was just like, “Is it possible to get a better looking track?” Everything was prepped so nice. It was just unreal to see the amount of people that were already here on a Friday. The set-up of the campers and whatnot was insane. I was dealing with jet lag, forcing myself to stay awake until 10:00pm otherwise I’d be awake at 02:00am. I still kept waking up at 4:00am or 5:00am. It’s always the way when I fly this way. You barely get to bed then you wake up really early. I was first out on track, so I needed to be out on track anyways.

You had a breakthrough ride here in 2018 and the 114 Motorsports deal followed that. A lot has happened to you in four years, huh?

It’s been a long four years and it’s been a tough four years but I’m grateful for that 2018 journey and what it led to. I’m only at the beginning of my career and have many years to look forward to. I’m really excited to be going into the off-season now and get a really good winter in, because I was kind of playing catch up all this year. I did not get to start riding until late. I could only ride once a week for like 30 minutes in the beginning (following the injury). I’m really looking forward to a good winter on a new programme, living in Belgium and close to Lommel. Really excited for what’s to come.

A new team will be interesting for you?

I’m really excited from the conversations that we have had and the programme that we are putting in place. Hopefully we can share the news with you guys in a few days. I also want to say thank you to HRC for sticking with me for the last three years. I missed all last year and they were patient enough with me to get back to the level they signed me on. I’m very grateful and appreciative of them. Such a nice family to have had my first factory ride with. Being teammates with Tim, also, I couldn’t have asked for a better teammate to show me the ropes. He’s a five-time world champion now so congratulations to him and the team on the title this year. Hopefully we can fight him for it next year.