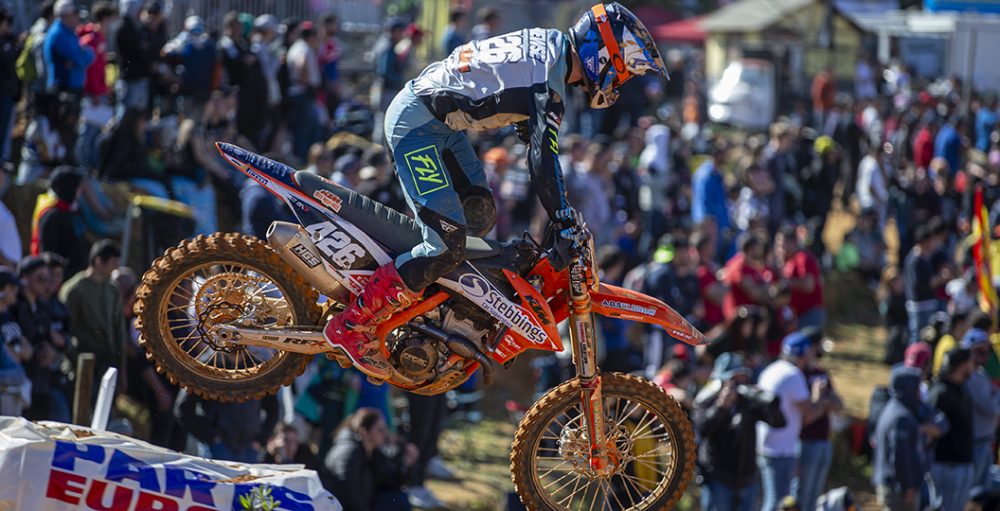 When an MX Vice podcast with Infront Moto Racing’s David Luongo was recorded on the eve of the Grand Prix of Portugal, round four of the 2022 FIM Motocross World Championship, there were many hot topics to dive into. Taking input from the fans and naysayers, this was a great opportunity to ask a burning question from February. Why did the season open in Great Britain, rather than in a warmer climate where there would be a higher chance of good conditions? Luongo was candid when answering the question, not hiding anything about what goes into such a decision and giving fans a glimpse at what it takes to piece a twenty-round calendar together.

“To come back to why we cannot have the event in July, the FIM Motocross World Championship is made by fine tuning the requests of twenty organisers who want the best dates in the best possible way,” Luongo told MX Vice exclusively. “This is something that is our most difficult task to do. In Indonesia, for example, it is impossible to go out of June and July. When we did not have a choice, we went to Pangkal Pinang and it rained for seven days. We cannot just do that. A good thing could have been to go to Argentina for the first one, like we did before, but the government did not give the authorisation to make the race at the end of February, because of COVID-19. They only gave the authorisation for March. France, Germany, Spain and all of those countries have contracts with a date in June. June is blocked.

“When we arrive to August and September… August has historically been the Nordic countries [Sweden and Finland occupy those dates this year]. September is the end of the season with Turkey, Oman and then we go to the USA. Whenever we go overseas, we need one week before and one week after. All in all, it is very tricky to make a calendar where everyone is perfectly happy. The thing is that when you saw the week that we actually made the MXGP of Great Britain, the weather was not warm but it was fantastic. It was the best track that we have had at Matterley Basin in the last decade. The condition of the track was perfect. For sure, we can do better. It was not possible to do something else with this situation this year.”

There is no doubt that the Grand Prix of Great Britain ended up being a success this year. The path to that point was bumpy, and rather stressful for all involved, but the race went off with a perfect track and in front of a strong crowd. It was not a bad place to start the 2022 FIM Motocross World Championship. COVID-19 was a factor in the decision, of course, as explained below, although that does not justify the decision to start the 2020 FIM Motocross World Championship in Great Britain. That was a couple of weeks before the pandemic fired into life, so options were not quite as limited.

“Before joining Youthstream and working with my father, I was a professional football player,” Luongo reflected. “I had my season in Livingston, Scotland. I signed in Scotland in June and the highest temperature that I saw was like 10 degrees. When you are seeking a high temperature in the UK, you could choose July or August and still have surprises every time. To come back to serious things… We; do the calendar in September in normal times. We have a bench of twenty races with one or two rounds that are at risk, whether it is with the organiser or what is going on in the country. The big majority of the races are secure and everything is done. We ended the season very late, so we were not sure about the calendar before mid-January.

“The only country that allowed sporting events to have public without limitation and masks was the UK. If we went to France then it would have been limited to 5000 spectators and if went to Italy then there would have been no spectators. We were in one big wave during the wintertime, so all of the governments were closing everything again. The UK was the only place where we could have a decent event with public and that really drove this decision. We were unlucky – that is the only thing that I can say when you have a storm that has not been seen in thirty years. It was crazy. We worked with Steve [Dixon], his team, the ACU and the FIM to secure the people first of all. It was really dangerous out there.

“It was impossible to host any people and something really tough for all of us. We decided to postpone the event to the next week on the Saturday morning, because we still had a little hope that the forecast could change,. We were lucky that we had the weekend after. Steve made five days of craziness to find the services, the marshals and everything to be able to deliver an MXGP round. We had the biggest public in the history of Matterley Basin, except for the Motocross of Nations. It was a good decision, in the end, because it was still the opening MXGP of the year. The British fans love motocross – it is really a country of motocross.”

Slotting the Grand Prix of Great Britain into a crowded schedule is seemingly a difficult task and, eager to do just about anything for the sport, Steve Dixon is always ready for a challenge and prepared to do whatever it takes to get the FIM Motocross World Championship to Matterley Basin. Even a date in late March or early April could be suitable for the British stop and, based on the following comment from Luongo, it could seemingly be an option. It seems likely that the championship will start in either Argentina or Oman next year, so starting the European stint in Great Britain could be an option. Then again, looking at the current landscape, Pietramurata and Agueda are usually locked into April dates.

“Our agreement is to start overseas,” Luongo said about what the calendar could look like in the future. “It is also good for the teams, because they start in easy conditions. It is a good start to the season. We discovered that with the mix of Qatar and Thailand. We tried to keep it [like that] as long as possible, but it was impossible this year. I think that next year we will come back to that.”