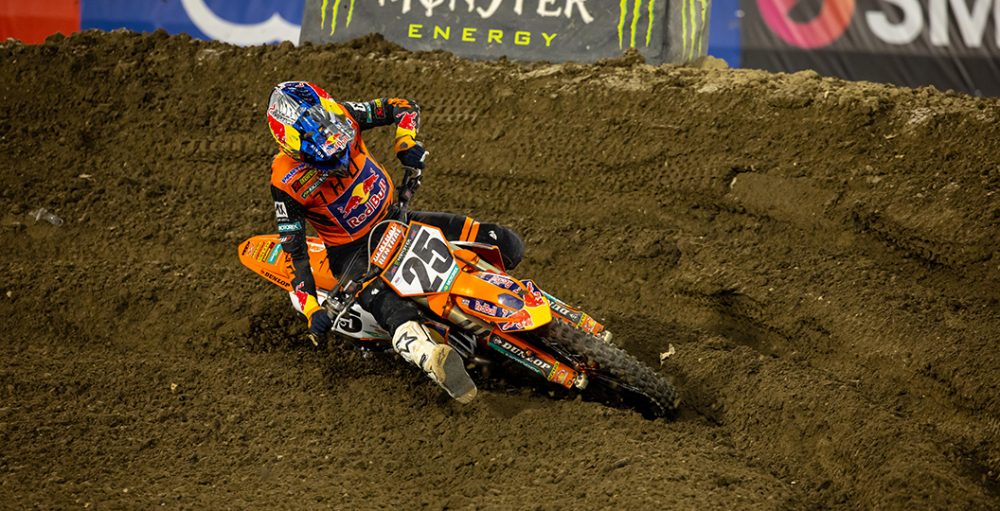 Marvin Musquin has had a baffling start to the 2022 Monster Energy Supercross series. To pinpoint whether it has been successful or not is a tumultuous task – there have been some significant highs and lows through four rounds of competition. Musquin is one of just seven riders to post four top-ten finishes, but he runs eighth in the championship standings and that is far from where he would expect to be.

The tenth that he posted in San Diego, Southern California, is a black mark on his record, as he clinched the holeshot and led three laps before falling onto the cusp of the top ten in a puzzling showing. It is fairly easy for one to point to the new KTM 450 SX-F as the reason for that – teething issues with an all-new steed are not uncommon – yet Musquin went in a different direction. Talking about his year exclusively with MX Vice, he took an opportunity to remind everyone that he is adapting to a new training programme.

“To be honest, I changed my programme this year and I think that I still need to get used to it,” Musquin commented. “It was a big change with David Vuillemin and the way that I am preparing myself for the races. Whatever it is – cardio-wise or rest-wise – it is so different to Aldon [Baker]. I really think that the body just needs to adjust. The main thing and goal for the main event is to give everything until the last lap and that is exactly what happened at Anaheim 1 – I was pumped! I did go down with Malcolm [Stewart] but I came back to fourth and passed [Chase] Sexton on the line. Last weekend in San Diego, I could not do it.

“It is very frustrating. Maybe I had too much high emotion at the first round? That is why I need to get used to that new programme,” he continued. “What I know is that I enjoyed it this winter and the training with David has been good. I need to trust and believe in it. I am riding really well during the week, but practice and racing are just totally different. I was talking to Ken Roczen; he was saying that he is not really doing well at the practice track and is then better at the races. I am the opposite! It is a tough one.”

The fact that Musquin has been one of the strongest out of the gate is overlooked. Musquin has an average starting position of sixth, which is the fifth-best average in the premier division. It is certainly a positive and something to think about as 2022 Monster Energy Supercross heads to Glendale, Arizona, for the first Triple Crown event of the year. Musquin is coming off a positive outing at Anaheim 2 as well, as he was consistent en route to sixth in the main event.

“I feel like I am [gelling with the new KTM 450 SX-F],” Musquin said as he continued an honest assessment of his season thus far. “On race day, those tracks get rougher than the practice tracks. It is tough to duplicate a racetrack at the practice track. I have been feeling good. There are little things to tweak and we are trying to be calm with Frankie [Latham] and change little things every weekend to make it better, but not change the whole thing. We changed a bit on the engine – it seemed like it was a little better.”

There is so much to discuss in the 2022 Monster Energy Supercross series, but Musquin is one of the most intriguing stories. There is still no way of determining how this will play out going forward. There have been some amazing showings, like the aforementioned Anaheim 1 ride, but then those struggles too. Could there be more of those positives on the horizon or are performances like San Diego going to become the norm? Glendale could help determine what the future holds, but Musquin is certainly confident.

“The speed is there, but there are a lot of things to put together. The guys at the front are strong, but it is not like I am five seconds a lap slower. I know that I can be in the mix.”