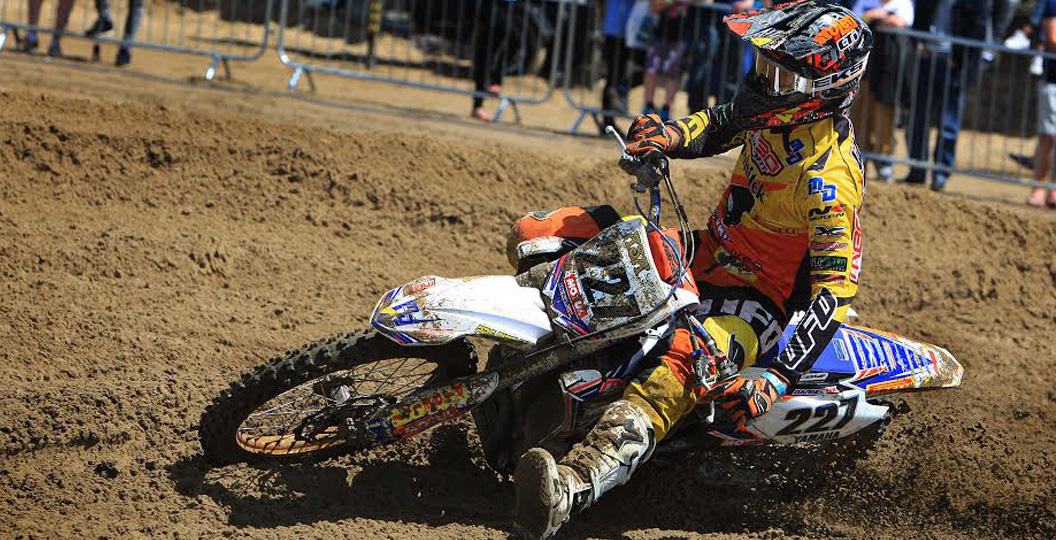 Kristian Whatley and the MBO Sport ASA Scaffolding Yamaha team made the trip down to Weston Super Mare to take part in the 2014 Pro Nationals Festival, a prestigious two day event staged on the beach made famous by the three hour beach race at the end of the year.

Jumps, whoops, banked turns and long straights had all been bulldozed into the sand along the sea front promenade to make a two minute lap for the three twenty minute plus two laps event, but the weather was unkind to the organisers with heavy overnight rain on Friday holding up proceedings which meant Kristian’s first race of the weekend went off the line at just after seven.

Kristian got a midfield start and passed Steven Lenoir and the on form Nathan Watson among others on the first lap, to slot in behind the early leader Graeme Irwin.

At the end of lap two Kristian found a way past Irwin and set about opening up a lead, which he did, till when it looked like he was riding well within his pace and controlling the race from the front disaster happened.

A screw holding the exhaust guard came undone which allowed the guard to swing and jam the gearlever down and holding the machine in a to low a gear to continue racing.

Kristian stopped, losing lots of track positions, and had to break the guard off to continue with the race, which he did, ending in fifth place.

A 20p screw cost the team the race win and from there it would be very hard to finish on the top step of the podium.

In race two, the first on Sunday, Kristian gated well and spent the early laps racing with his long time rival Brad Anderson till, on lap four he managed to open up a gap and set off after the race leader Watson.

He caught Watson but just couldn’t find a way past in the laps remaining so Kristian finished in a good points scoring second.

The third and final race of the weekend took place after another heavy downpour, but Kristian got the holeshot and slowly pulled away from the rest of the pack for the win.

Watson had started the race in fourth and moved into second at the halfway stage, which was enough for him to get the overall win.

Kristian, even with the problems of race one had done enough for second overall with Irwin third.

Kristian said after racing about his weekend, “I didn’t have a good start in last nights race, around tenth I think, but past Graeme (Irwin) for the lead on lap three. I was riding strong and well till we had a bit of a problem with the bike. A screw came out of the exhaust leg guard and it swung down on the remaining screw and gamed in behind the gear lever and stopped me changing gear. I had to stop and break it off to get back in the race, but by the time I had done that I had lost my rhythm and ended the race in fifth place. In the first race today I spent the whole race trying to get the lead off Nathan (Watson). I would close in on him, and he would pull away but it was a good strong race and I don’t think I could have done any better so I am happy with that. In the last race I got the holeshot and found some good line on the changing track for the win. All in all it’s been a good weekend with the bike running very well”

The team’s next outing will be The Maxxis British Motocross Championship at Whitby in Yorkshire on June 29th.