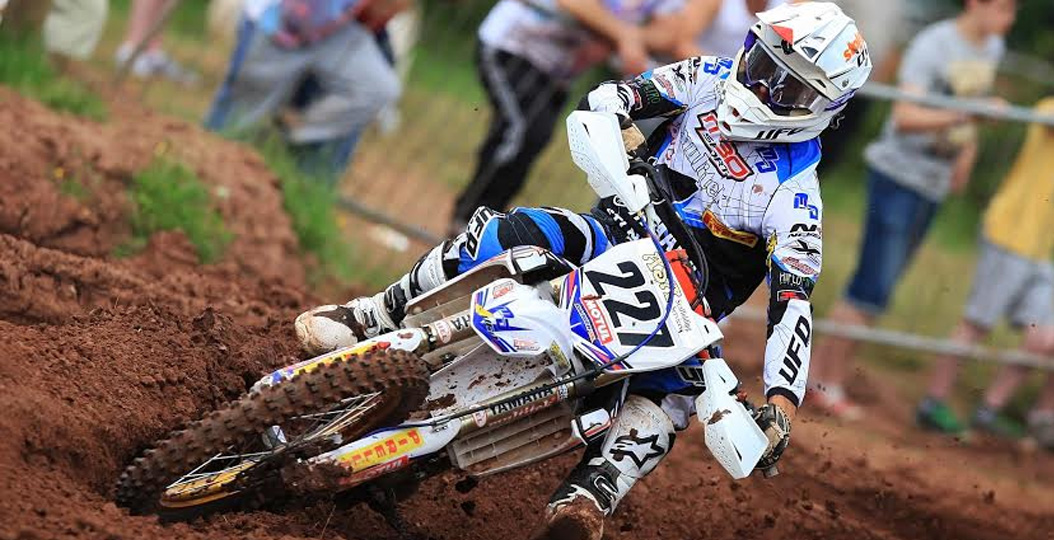 Kristian Whatley was the only MBO Sport ASA Scaffolding Yamaha team member to make it to round four on the MX Nationals at Pontrilas this weekend as it’s two other riders are still on the injured list, but hoping to rejoin the team very soon.

The hillside track was in a very wet condition after heavy rain on Thursday night and getting a good consistent result from three races was always going to be a bit of a lottery, but the keen band of organisers had done what they could to allow the event to go ahead. Some of the wetter sections were cut out of the circuit completely while other parts had a layer of the mud scraped off. Kristian sensibly didn’t go out in free practice and only did enough laps in timed qualifying to get himself a top ten gate pick on the start gate, therefore saving energy, the chance of injury in the traitorous conditions, and were and tear on the racing machine.

At the start of the one and only pro race on Saturday Kristian got the holeshot and quickly built up a comfortable lead which he maintained till the checkerd flag as he crossed the finish line almost twenty two seconds ahead of second place man Graeme Irwin. Race two, the first on Sunday saw Kristian make an uncharacteristic crash four laps into the race having just past Brad Anderson for the lead. After picking himself, and a slightly bent Yamaha up Kristian was back in twelfth place on a drying track that was becoming very one liney. By the end of the seventeen lap race Kristian was back to ninth place and scored some very useful championship points.

In the third and final race of the weekend Kristian once again got the holeshot and lead the race from start to finish while keeping an eye on second place man, and eventual overall winner, Nathan Watson just to make sure he didn’t sneak up on him. After racing was over for the day a happy Kristian said, “I set a good lap time earlier on in the qualifying session and came in as there was nothing more to learn on the deep muddy track. I got a good start in the opening race on Saturday and managed to open on a good lead and cruise till the end of the race. Though the track had dried out a lot for the first race on Sunday the bottom field was still very wet and after another good start I had a coming together with Nathan (Parker) and Shane (Careless) in turns one and two. I managed to finish the lap in about fifth or sixth but over the next couple of laps I managed to make my way into second behind Brad (Anderson) who I caught and passed in another couple of laps. I was comfortable in the lead when I hit a big hole in one of the rutted turns and went over the bars, bending the bike a bit but managed to bring it home in ninth I think, which wasn’t too good. In the last race of the weekend I lead from start to finish but Nathan (Watson) was pushing me hard and fair play to him, he and his bike are going very well at the moment. Second overall was OK considering the track conditions and the second race crash”