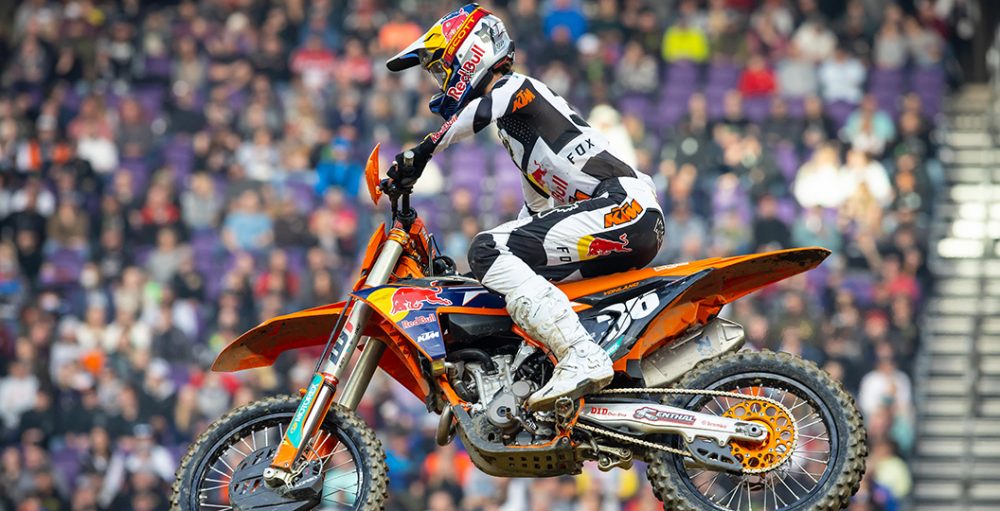 Three days on from Red Bull KTM Factory Racing’s initial press release, Max Vohland has taken to social media to share an update on his injured shoulder. The good news is that there are no broken bones, but a haematoma on his shoulder will likely rule him out of this weekend’s Triple Crown in Texas. There is currently no official word on how long he will be out of action for. The statement that Vohland shared on his social-media channels can be found below.

“Apologize for the late update, I wanted to get all information before posting: Good news is nothing broken; MRI shows a massive haematoma to the right shoulder and a couple of small cracks in my clavicle. At therapy working but looks we will miss this weekend. I will be back racing ASAP.”

Red Bull KTM Factory Racing’s Max Vohland had an unfortunate start to the 250SX East series. Coming in with a head of steam after a successful off-season, he set the fourteenth-fastest time in qualifying in Minneapolis and transferred straight to the main event via a seventh place in his heat race. Vohland’s night did not progress much further than that though, as a crash in the first turn left him searching for medical attention. KTM Factory Racing confirmed that x-rays came back clear, but he is going to seek another opinion once he returns home.

“In the main event, Vohland got off to a mid-pack start and ended up going down in the first-turn with multiple riders hitting him while on the ground. Banged up, Vohland made the decision to get checked out by the medical staff on-site ending his race before the completion of the first lap. The initial x-ray did not show any broken bones but Vohland plans to get a second opinion when he returns home this week.”

The fact that Vohland is still seeking medical advice indicates that he is in a lot of pain, even though the dust has settled. It remains to be seen whether he will be in a position to race at this weekend’s event in Arlington, Texas. Minneapolis marked Vohland’s fourth start indoors – he dislocated his hip at round four in his rookie year and had to bow out of the series early. A sixth, which came in the last main that he finished, is his career-best finish in Monster Energy Supercross.

Red Bull KTM Factory Racing do not have another rider aboard the KTM 250 SX-F on either coast. Privateer Henry Miller was the strongest KTM rider in the 250SX main event in Minneapolis – he finished fourteenth. The 450SX main event was a much better exercise for the factory squad, as Cooper Webb returned to the podium for the first time since round one in second and Marvin Musquin claimed his first trophy of the season in third. Webb is now 25 points down in the title race.