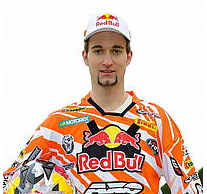 KTM Motorsports and MX1 rider Max Nagl will part company at the end of 2012, when the German rider’s present contract expires. Pit Beirer, KTM’s Head of Motorsports extended good wishes to Nagl but said there had been a slight difference of opinion as to how the configuration of the team should be constructed in the future. Nagl has been associated with KTM for ten years.

Beirer underlined that KTM is committed to fully supporting Max through to the end of the season, just as it has lent that same full support right through his rehabilitation from first back surgery at the end of last season right up to his current return to the track.

Nagl has been a key member of the Red Bull KTM factory team and manager Stefan Everts praised him for his significant contribution to the company’s success in recent seasons. “We have been together during very important times for our development as a team and for Max’s development as a rider. We have achieved a lot together and for this he has our sincere thanks. I also extend my very best personal wishes for his future career endeavors and I will always be there to help and advise him, should he need it.”

Beirer said KTM was hoping to come to an arrangement where Nagl would be able to ride for one of the KTM satellite teams, where he would have full factory support. “Max has a long association with KTM and we would be pleased if we could continue it in this format, but naturally if he has an offer to race with another factory team we would also be delighted for him to be able to pursue his racing career in this way,” he added. The company’s firm commitment to Nagl right through to the end of the 2012 season has been further underscored by the production of a recent comeback video.

Fixed members of the Red Bull KTM Factory Racing Team in 2013 are Tony Cairoli, Jeffrey Herlings, Jordi Tixier and one other rider, yet to be named.