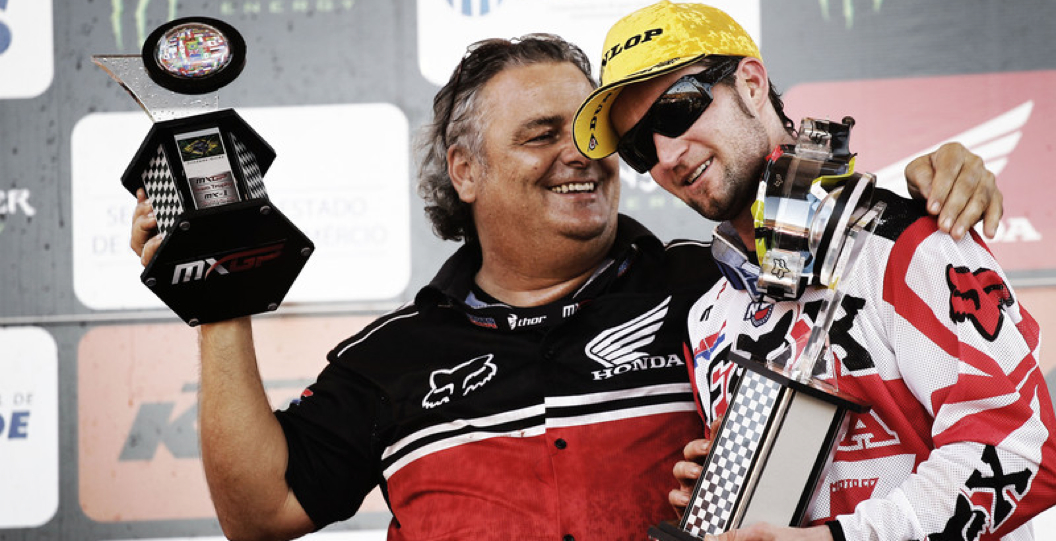 Max Nagl and his Honda CRF450RW were unstoppable on the red clay of the Goias track this weekend as the popular German took a clean sweep of victories.

Yesterday’s performance saw him charge into a commanding lead of the qualifying race and never look back, and today was much the same. In race one he took the holeshot and then made it his race, storming to an emphatic third moto win of the year. Setting his own blistering pace at the front, the super-consistent German also set the fastest lap to complete the domination.

The start of race two was in fact the only time this weekend in a race that Max didn’t lead. Rather he was second for the first few corners, until a decisive move saw usual service resumed as No.12 again rode into the distance to seal a double win and the overall victory – his first of the season, the first of the season for Team HRC, and fittingly at the Grand Prix title-sponsored by Honda Brazil.

Max Nagl: “I just had a perfect day – I didn’t make any mistakes and I could control the race from the front so I’m really happy about today! From the beginning we had a really good setup and already from Saturday morning we were in a good direction and I was feeling really comfortable. Actually this morning I was a bit nervous because I know everyone expected me to win today because I was so good yesterday, but as soon as we started I was just feeling so well with riding, and very comfortable and confident again.

“After Lommel the team and I have done a really good job in testing and have been able to improve the bike again. Also after Lommel I took a lot of rest and that really helped me so now I’m physically much better again. Today we were just that little bit better than everyone else, and that makes me really proud. I was so happy because all the work is paid off with this – it’s so good!”

Keisuke Inomoto (Team HRC Team Principal): “Today was a very good day! The first moto was a perfect story – good start, great riding and Max could manage the pace from from the front. In the second, only at the start was he in second but this was no upset – he was very confident and rode very cleverly to take back the lead and take another victory. Overall this weekend is a great result for the team – it’s great to have taken the first win for HRC in this new era, and even more fantastic to have won everything this weekend! I also want to congratulate Tim Gajser for his first MX2 moto win today – it’s been a wonderful weekend for HRC, Honda and the CRF!”

Roger Harvey (HRC General Manager): “What a great weekend! You can’t top that – Max was fastest in qualification, fastest in both races today and won them both – he ticked all the boxes this weekend. He was pushed a little more in the second race but he’d got enough in the tank to respond. In general you can’t wish for a better day. It’s great for all the team and to have done it here in Goias where Honda Brazil has such a big presence is fantastic. We all know that when Max gets out of the gate well he can be dangerous, and that’s exactly what he did today. A really, really good weekend and a great result for all the hard work that all of the team have put in all season.”