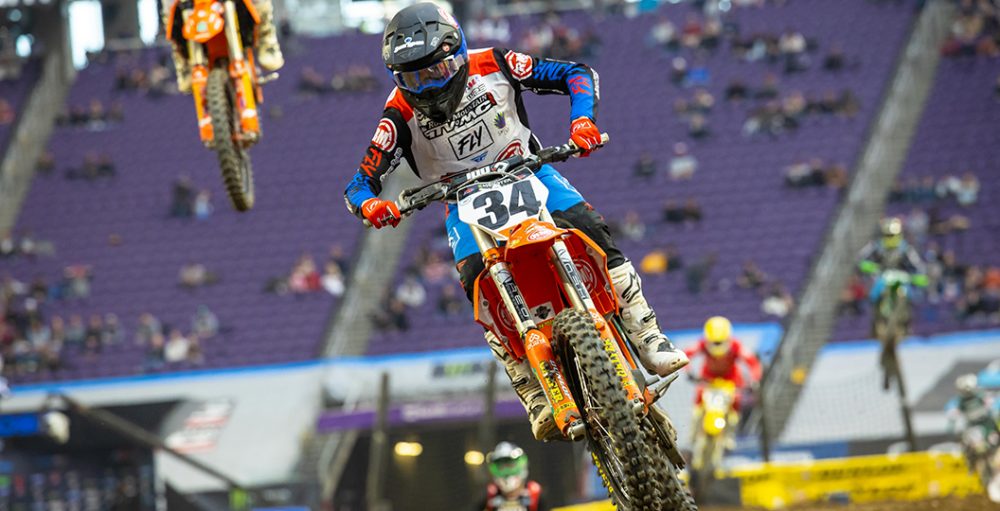 Rocky Mountain ATV/MC KTM WPS’ Max Anstie crashed hard in the premier-class main event in Minneapolis, round seven of 2022 Monster Energy Supercross, and was taken to hospital with a handful of issues. Now, two days on and still in Minnesota, Anstie has released an update on his condition. The broken ribs appear to be the biggest problem, as the internal injuries that he was fighting initially have progressed quite rapidly. Anstie shared the following excerpt on social media.

“Alright so I went down In the main on Saturday (pushed the front and slid out on the ramp of a little double and face-planted the next jump). Long story short and the main thing is I only broke two ribs. They are the top two ribs and I didn’t even realise how high up your ribs go! My neck and shoulder feel the worst at the moment. They kept me in hospital overnight, because I collapsed my lung and had air around my heart. Plus my heart was bruised and stressed. Anyway, all that settled down and the collapsed lung was tiny so it fixed itself overnight. I’m still In Minneapolis – they won’t let me fly back to Florida until Tuesday.

“In reality it’s only ribs so I’ll see how I am over the next few weeks, but I’m pretty confident that I won’t miss many races. I’ll heal up and be back out on the SX track ASAP. It’s a bummer but it’s the name of the game. Had a lot of fun on track in Minneapolis, even did my first LCQ and led some laps. I know it was only an LCQ but still it was fun. It’s all part of it – I still love riding supercross.”

Anstie was enjoying a solid season aboard his KTM 450 SX-F. Consistency was arguably his greatest strength, as he made every main event with relative ease and hovered just outside of the top ten. An eleventh at Anaheim 2 was a season-best finish and, coincidentally, one of his most difficult days. A crash in practice caused damage to his shoulder (the opposite side to his new injury) that made most question whether he would be able to race. Amazingly, he went on and secured a career-best ranking.

It will be possible for Anstie to return to racing before the end of 2022 Monster Energy Supercross, although an exact timeline has not been determined just yet. Rocky Mountain ATV/MC KTM WPS lost Joey Savatgy to a torn ACL at round three, so Shane McElrath will be the team’s sole representative in the coming weeks. McElrath is having a difficult term in the premier class – he is twelfth in the championship standings and has lost more spots than anyone else this year.