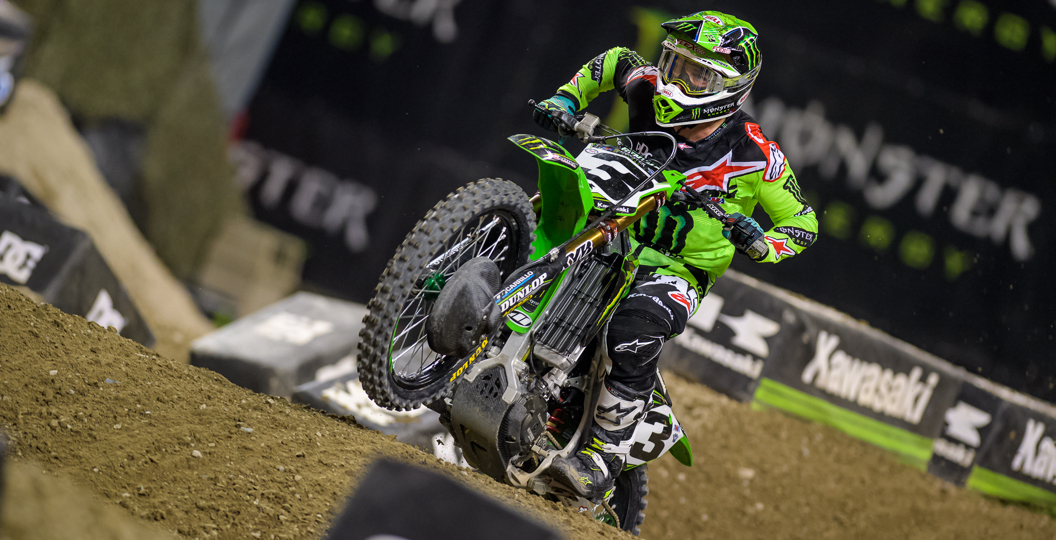 We’re getting a bit of a shake up this weekend in the Monster Energy Supercross series. Daytona Speedway awaits the guys for round ten of seventeen and KTM’s Ryan Dungey has got a twenty-four-point lead whilst looking for his fourth 450SX title. Kawasaki’s Eli Tomac is the favourite here, but the track at Daytona the last few years has heavily favoured the starts, something that Tomac hasn’t always been able to nail.

The track has a ton of turns and I’m not exactly sure why. It’s a lot different than it used to be and the reasons why are just rumors really. Whatever the real reason is, last year’s track (that’s similar to this years) was widely panned by most of the riders. I do wish that the promoters would bring back the track from a few years ago when it proved to have some long straights and tricky rhythm lanes that helped passing.

Daytona gets brutal, the soft Florida grass creates braking bumps, square edges and the fast rider knows that he’s got to change lines from lap to lap. It’s the most unique race of the year and it should be interesting… If the track allows it.

– I have to chuckle when I see all these riders doing some “Daytona” testing on their bikes. It’s a unique track and not a traditional supercross track, yes, but when I was a mechanic and the track was way more motocross-y, we used to do the same testing and go to the race with a chassis set-up that worked well. Then invariably we’d end up back with our supercross set-up with a little less compression. It seemed like that happened every single year and now, with the track very much like a supercross, I wonder why you just don’t open up the clickers and call it a day, because you’ll end up there eventually.

– The Daytona Supercross is, and has been for years, sponsored by Honda, so it’s a big race for ‘Big Red’. Ken Roczen is, of course, hurt so he won’t be there other than to hang out, but the team did recruit GEICO 250 rider Jeremy Martin to ride the #94’s bike. Martin’s supercross season hasn’t been going to plan, but he’s shown good speed at Daytona and puts another Honda bike out there in front of all the bosses. Martin should do well, so look for a top ten from him and a good finish for the other rider Cole Seely who’s been very fast at the Speedway.

– The JGR Suzuki team will have yet another rider under their truck in Kyle Cunningham racing the 250SX class. They started with a four-man team, but Cunningham will be the sixth guy to line up for the team this year with injuries striking every member of the original team before the season or during it. It’s amazing really. Kyle Peters was doing well for the guys as Matt Bisceglia’s fill-in, but he’s got to go to Australia to race for Suzuki so the team will use Cunningham for the rest of the 250SX East series.

– Looks like there will be some news announced this weekend when it comes to the American motocross series. I’m not exactly sure what it is but, with the scheduled Charlotte USGP cancelled a few weeks ago, I think it’ll be an announcement of an American USGP at a track that is used by MX Sports as there seems to be more cooperation between Youthstream and MX Sports than there ever has before. Perhaps there might even be an announcement of a Motocross of Nations for the USA with a national series track? Stay tuned.