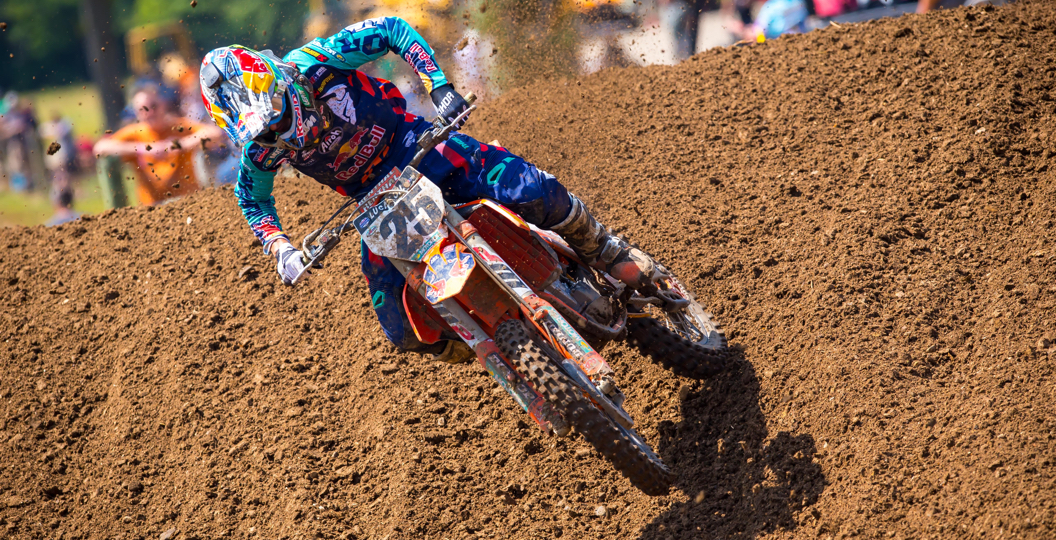 Something struck me a couple of weeks ago at the WW Ranch in Florida whilst watching the USGP and then again with Red Bull KTM’s Antonio Cairoli clinching his ninth MXGP title in Assen, whilst his teammate Jeffrey Herlings won his third race in a row dating back to the American national in Indiana three weeks ago.

You remember that? When Herlings charged from the back to pass Marvin Musquin, on a KTM, with a lap and a half to go to capture the overall win? Herlings, Cairoli, Musquin are all champions, all winning premier races and something they have in common is the orange machine underneath them. Are KTM taking over worldwide motorcycling racing?

It’s an amazing rise to prominence for the Austrian motorcycle maker. It wasn’t that long ago that they were looked at as an afterthought in racing. I can vouch for the fact that the brand has come a long way, as a member of the first ever American KTM factory effort in 2000-2001 (and wrenching for the rider to win the first ever AMA race in 2000 at High Point, so in a way perhaps I’m a part of this?). There was momentum in those early years with Grant Langston, but losing the Red Bull sponsorship and some machines that weren’t quite up to task sent the OEM off wandering in exile a few years.

But, with the hiring of Roger DeCoster and Ian Harrison (Harrison never gets enough credit for his contribution to the bikes and team) and then snagging up Ryan Dungey, the OEM changed the course of its American efforts whilst winning in Europe. Whether it was the lightning fast 125 of Grant Langston, the great 250F of Ben Townley or even the superiority of the KTM 50 and 65, the small bike market is where orange started to creep into the average person’s mind. Once ready for prime time on the big bikes with Dungey – that is when things really took off.

There have been some missteps along the way like thinking the 350F was going to compete in American racing and probably waiting too long to go with a dedicated 250F squad over here, but things are humming now with amazing riders and bikes on both sides of the ocean.

Not that long ago a VIP at a Japanese race team told me that that KTM “caught all of us with our pants down” in terms of budgeting for racing and vowed that would stop very soon, but I have not seen it yet. Whilst Suzuki lose a factory team and go with JGR over here, Kawasaki, Honda and Yamaha go conservative with two 450 riders each, KTM had three this year and are going with two in 2018. However, they also support RM ATV/MC KTM with Blake Baggett and Benny Bloss and last year the team had Davi Millsaps. KTM is throwing more money at racing, in a time of pullbacks, and it is paying off.

On the innovation side of things, it is KTM who first put e-starts on their motocross bikes and finally now we see the Japanese following suit. I imagine hydraulic clutches will not be too far away, as will the caged in motor mount nuts and lightweight fasteners. Although I hope no one goes with the 13mm nuts that KTM insists on using, they have hit a home run in many aspects on the construction of their bikes.

It has not happened in a flash and it is not something that came overnight. It started with off-road, then the very small bikes and now the orange takeover is everywhere. What the other four Japanese OEMs do next is fascinating. Will they fight back or concede off-road motorcycling racing dominance to Austria?